A Dallas protester speaks out 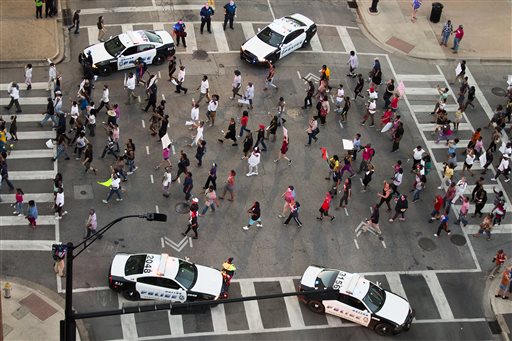 Protesters march during a Black Live Matter rally in downtown Dallas on July 7, before officers were shot. AP photo

From a column by Starita Smith, written for Progressive Media Project:

I protest police brutality, not the existence of police.

My goal is to show solidarity with those whom I cannot comfort and express anger at the senseless loss of life. Having been a crime victim, I know police can be necessary.

And in Dallas, where I live, I have repeatedly seen police handle demonstrations with calm resolve and watchfulness. Before shots ripped through their ranks last week, some officers at a rally in the city’s downtown posed for smiling photos with protesters who were demonstrating against the fatal police shootings of black men in Minnesota and Louisiana.

We protestors, whether speaking out against police brutality or immigration policies, gather and march in safety largely because members of the Dallas Police Department show up in force to protect us and prevent violence. …

The day after the ambush, city government and religious leaders gathered in downtown Dallas. Mayor Mike Rawlings said that racial issues must be confronted. Texas Lt. Gov. Dan Patrick, a tea party Republican, stood next to them.

Later, in a television interview, Patrick called the protesters “hypocrites” for running from the bullets and expecting police protection.  He suggested that people who protest the police don’t deserve their help.

I believe exercising my rights to free speech and peaceful assembly mark me as an authentic American. Those who frame protests as an issue of color — black versus blue — and use color as a way of denying protesters their rights as citizens, are scapegoating and demonizing people without cause.

They should be demanding answers just as vigorously as we do. They should be just as angry about the videos that show highly questionable police behavior.

In the meanwhile, we must all do our best to remain peaceful.

Leonard Pitts: Police are not the problem, we are