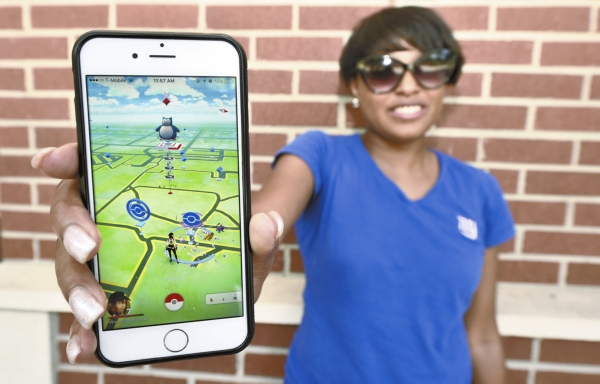 Keyanna Arnett poses for a photo with the Pokémon Go game on her cell phone at Augusta University in Augusta, Ga., Tuesday. (Michael Holahan/The Augusta Chronicle via AP)

A western Australian police department took a strange call Sunday. Two “suspicious males,” wearing dark colors and winter hats, were spotted walking in circles and staring at their phones near a local park.

When officers arrived at the scene, they found there wasn’t much to fear — the two men were just playing Pokemon Go.

Pokemon Go, for those who haven’t already downloaded the app, is an updated version of the 1996 Nintendo game in which players catch, train and battle creatures called Pokemon. By using smartphones’ built-in cameras and GPS, this new game allows players to battle Pokemon characters such as Pikachu and Squirtle just as they used to, except in their real-life surroundings by walking — yes, physically walking — to different locations.

This hybrid of real life and digital game is called augmented reality, and it comes with a warning: “Remember to be alert at all times,” the app says. “Stay aware of your surroundings.”

Over the weekend, stories rolled in of scraped knees, bruised shins and busted hands courtesy of careless Pokemon Go players. A few more sinister stories grabbed headlines, including the account of a 19-year-old woman in Wyoming who found a dead body in a river while she was on the hunt for more Pokemon. Police officers in O’Fallon, Missouri, believe that a group of teenagers used the app to lure players to remote locations and then robbed them.

Gamers aren’t deterred. According to SimilarWeb, Pokemon Go is about to surpass Twitter in the number of daily active users. Keep in mind, the app has only been available for download since July 6.

I witnessed the phenomenon firsthand this weekend, as my friends, all 20-somethings, repeatedly reached for chargers to replenish their depleted phone batteries. The game was a constant topic of conversation. Watching them, face-in-phone, it didn’t seem much different from any other attention-absorbing app.

The real phenomenon? It got them outside.

One friend said he covered 4 miles on a Saturday afternoon and explored a cemetery on Chicago’s North Side in pursuit of Pokemon. A co-worker reported that she managed to walk 13,000 steps in a day — and spotted other young people doing the same. Some had eye-witness accounts of kids roaming suburban neighborhoods, advising others on where to find more Pokemon.

While the younger generations are more active than their parents on average, it’s still a struggle to get them moving.

Whether the uptick in physical activity sticks around long enough to have a lasting impact is another question. Fads fade. Novelty wears off. Weather turns cold. We should enjoy it while it lasts, even if Pokemon Go players come home with a few bumps and bruises. As every older generation already knows: Scraped knees heal.

Greiwe edits the Chicago Tribune’s Voice of the People section.

Editorial: Waking up to injustice