McClelland to serve to life in prison for shooting Marcus Kauffman 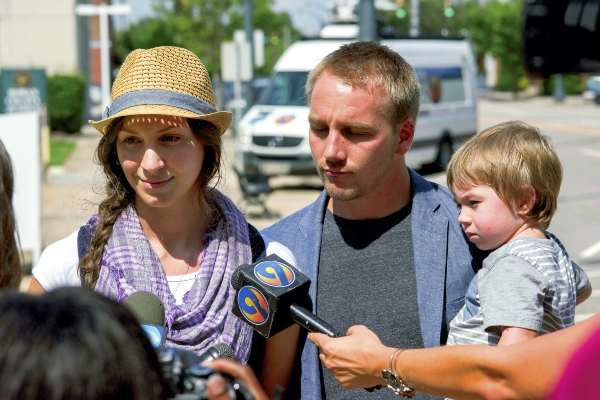 Maryann Kauffman talks with the media in front of the Rowan County Courthhouse on Monday after a hearing for Khari McClelland, who pleaded guilty to killing her late husband Marcus Kauffman in 2013 and was sentenced to life in prison. With Maryann are her new husband David and 2-year-old Landon, the son of Marcus and Maryann. Jon C. Lakey/Salisbury Post

SALISBURY — The family of Marcus Kauffman say they forgive the man who shot and killed the 25-year-old during a robbery he interrupted at his western Rowan County home in 2013.

Khari McClelland, 26, was sentenced Monday to life without parole for the Dec. 2, 2013, shooting. He pleaded guilty to first-degree murder, but could’ve faced the death penalty in the case. The other charges related to the incident include robbery with a dangerous weapon where he was sentenced to a minimum of just over eight years to 11 years, which he’ll serve at the expiration of the murder conviction.

The offenses of discharging a firearm into an occupied property and breaking and entering were put together and he was sentenced to a minimum of nine and a half years to 12 and a half years for both. This sentence will be served at the expiration of the robbery offense.

Kauffman and his pregnant wife, Maryann, had returned to their Chenault Road home after having breakfast with his parents. The couple saw a blue car parked near their home with the hood up.

It would later be determined McClelland and friend Jaylend Turner went to the house to rob it because they figured no one would spot them. What they didn’t count on was a neighbor who asked if they needed help and a RITA van driver who also saw the “disabled” car prior to the Kauffmans returning.

Marcus took Maryann to a nearby friend’s house and went back to their home to see if he could help. McClelland said in his statement to Rowan authorities he tried to get Turner to leave before Kauffman returned.

He told Kauffman to move on and pointed a gun at the ground, McClelland said, and fired. He continued firing. Investigators said one of those bullets struck the soon-to-be father in the back of the head as he tried to drive away. He’d been killed with his own gun. Kauffman was on the phone with 911 as he attempted to leave.

He crashed through a nearby cornfield and struck a tree. Maryann, who’d heard the gunshots, ran toward the house. Marcus was airlifted to a hospital where he died weeks later after his family decided to remove him from life support.

Authorities said that, among other items, McClelland and Turner stole Kauffman’s gun and his laptop. The laptop was tracked to a Statesville home where investigators spoke with Teasley, who told them he bought the laptop from a man for $200.

Family members and friends of both Marcus and Maryann Kauffman as well as Khari McClelland were overcome with emotion and sobbed openly as Rowan County District Attorney Brandy Cook recounted the facts of the case.

“We have taken into account their wishes on how they would like to see this case resolved,” Cook said. “They are the ones that have been most affected by this tragedy and are living the day-to-day reality of no longer having Marcus in their lives. The disposition today is a direct reflection of our office honoring their wishes.”

“We realize you have family who will be separated from you as well. We realize this is difficult for them,” David Kauffman read from a statement.

“We miss him every day, but because of the love of Jesus Christ in our lives, we look forward to seeing him again,” David said.

“We choose to forgive you,” he said.

Maryann, who has since remarried, stood with her husband, David, by her side and in a soft voice expressed her appreciation for the hard work of the investigators and district attorney’s office.

To McClelland, Maryann said she forgave him.

“I forgive you from the bottom of my heart. I’m not angry,” she said.

She hoped that he’d one day know Jesus and said she prayed that he would.

“It’s because of him I can say I truly forgive you,” Maryann said.

“I’m sorry. I mean that from the bottom of my heart,” McClelland said to the Kauffmans.

He asked for forgiveness for a senseless act that he said went too far.