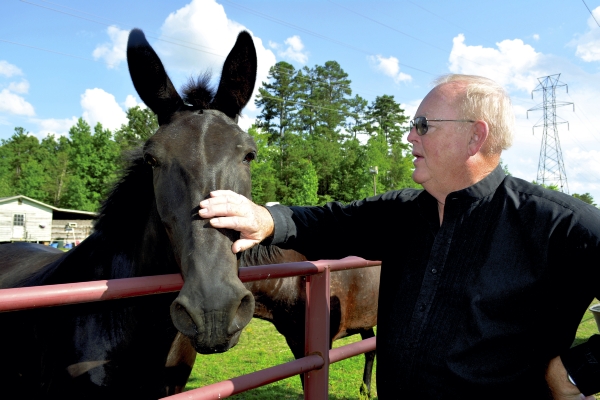 In the early 1980s, Gene Long came up with the idea of Farmers Day. The festival will celebrate its 35th year next weekend. Here, Long visits with Blackjack, his mule, in the backyard of his Kannapolis home. Photo by Susan Shinn, for the Salisbury Post.

KANNAPOLIS — In the basement of his Kannapolis home, Gene Long sits in a big, red recliner, reminiscing about stories the late Dan Ritchie told him.

Ritchie himself would sit in a recliner at Long’s furniture store in China Grove, regaling him with stories of farmers bringing produce — and wild rabbits — to town for sale. The goods were shipped via railroad everywhere, Ritchie told Long.

Long also recalled sitting on a mule at his granddaddy’s farm. Those two memories combined to plant the seed of Farmers Day, the annual festival which celebrates its 35th year next weekend in downtown China Grove.

When Long, now 74, became president of the town’s Board of Trade in the early ’80s, he wanted to promote the downtown and bring people to China Grove — and he remembered Ritchie’s stories.

So he formed a promotions committee and asked Barbara Doby to lead it, to plan an event that would become known as Farmers Day.

“I chose her because she could get stuff done,” Long says.

China Grove natives like to call Farmers Day the hottest day of the year. That may be, Long says, but it’s also the height of the produce season.

Despite the heat, the festival took off from the beginning.

“That committee made it go,” Long says. “Friendships were formed that still exist today.”

“Me and him and Judy worked our butts off,” Doby says. “It was great back then. It was some good times. We started it off right.”

Long eventually bought another furniture store in Kannapolis in the late 1980s that took him away from his Farmers Day duties. By then, Doby and Janice Jenkins ran the show, and did so until the event’s 25th year, according to China Grove Mayor Lee Withers.

That year, he says, the two announced they were stepping down — and there’d be no more Farmers Day.

Certainly not, said Withers, who took over the event for the next four years. The Town of China Grove now coordinates it.

“To our family, Farmers Day is a national holiday,” Withers says. “My kids don’t understand why everybody doesn’t celebrate Farmers Day.”

He adds, “Our whole summer travel plans revolve around Farmers Day. I love China Grove, and I love leading the town.”

“It has developed into a festival that brings people in from out of town, to meet their families and have reunions,” Long says.

He speaks fondly of the dunking booth and the Little Mr. and Miss Farmer contest.

“Some good people made this happen,” he says. “I can’t think of anything I’m more proud of.”

Long finally got out of the furniture business after 52 years. That means he can go to Farmers Day whenever he’d like.

“I go up Main Street and meet people,” he says. “I get a barbecue sandwich and a cup of homemade ice cream. I just look it over. It’s my baby, you know?”