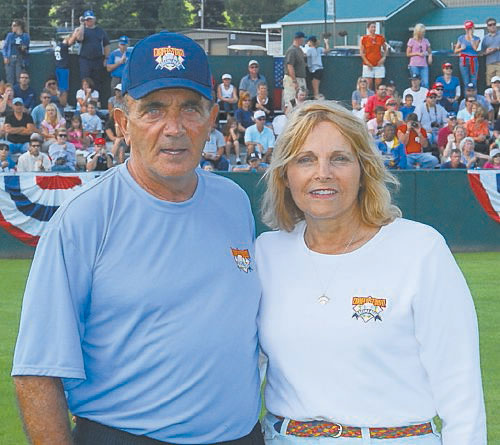 Lou Presutti, called “Coach” by the thousands of kids who played each year at his Cooperstown Dreams Park in New York, died Wednesday night. He was 75.

Presutti and his wife, Linda, divided their time between their youth baseball enterprise located about 5 miles from the Baseball Hall of Fame in Cooperstown, N.Y., and their longtime home and offices in Salisbury.

Tripp Roakes, serving as a spokesman for the family, said Presutti was “the most powerful person in youth baseball.”

“He was an American treasure who chose Salisbury to live in,”  Roakes told the Post Friday. “… You talk to any kid, 13 to 33, and 90 percent will say it’s the best baseball memory of their lives.”

On Twitter, after learning of Presutti’s death, Harper posted this message:

“You will be missed Lou! This man touched more lives and made more dreams come true than anybody that I know. Can’t believe he is gone, but will never be forgotten! To the Presutti family my thoughts and prayers are with you. #BeYourOwnHero.”

Presutti always had two messages for kids during their opening ceremony at Cooperstown Dreams Park: Be your own hero, and dream your own dreams.

“He was always thinking of how he could do better for the kids,” Roakes said.

Roakes, a Salisbury native who is now a resident of Charlotte, considered Presutti a close friend and mentor, though he did not work for the company. “Lou became a huge part of my life over the years,” Roakes said.

Roakes’ own son was in New York this week to play at Dreams Park, while Roakes was staying in a guest house. “It’s heartbreaking to know Coach isn’t going to be here,” Roakes said.

Presutti was constantly moving around the large baseball complex in his golf cart.

Established by Presutti in 1996, Cooperstown Dreams Park today includes 22 youth baseball fields, 20 batting cages and 104 barracks or clubhouses for the teams who spend a full week at a cost of $895 per player or coach.

About 17,000 players from across the country and Canada  — 104 teams a week over 13 weeks — travel to Dreams Park each summer with their families.

Presutti always said the impetus for Dreams Park came from his father, the late Lou Sr., when they made a visit to the Hall of Fame together and his father said every youngster should have the chance to play baseball at Cooperstown.

The $895 cost per player covers housing, three meals a day, two sets of uniforms, insurance, warm-up sets, a ticket to the Hall of Fame, a commemorative ring, laundry, a guarantee of at least seven games and various skills competitions.

A native of Olean, N.Y., Presutti coached youth baseball himself for 34 years. He first came to Salisbury as a target marketer for SOMAR Sampling. He used his savings from that career to buy 156 acres in New York near Cooperstown in 1994. He opened up the Dreams Park two years later.

In 2003, Presutti built a similar youth baseball complex in Port St. Lucie, Fla., but Roakes said Presutti sold that venture. In the early going of Cooperstown Dreams Park, Presutti faced lawsuits from partners in the business and former employees, but the Post has no record of the outcomes in those civil actions.

Presutti’s company has operated out of offices at 330 S. Main St., and Roakes said the family intends to keep the enterprise going.

“He surrounded himself with very good people,” Roakes said. “We know what his dream was.”