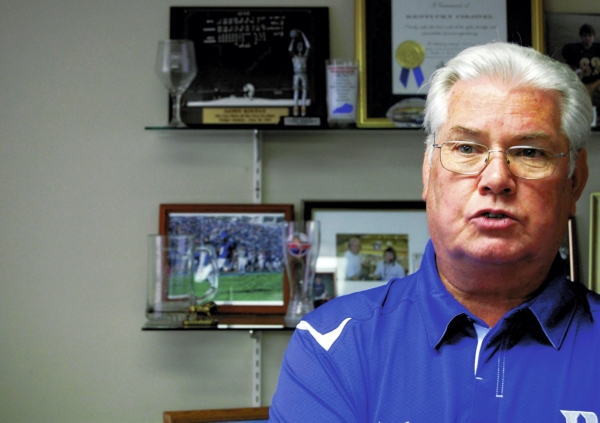 Bob Harris, voice of the Duke Blue Devils, will retire after his 41st season ends next spring. Photo by Mark Wineka, Salisbury Post

When he calls his final basketball game this spring, Harris will have spent 41 seasons at Duke, making him the longest-tenured play-by-play man in Atlantic Coast Conference history.

He was behind the microphone for all five of Duke’s national championships in men’s basketball, plus 13 Final Fours.

He’s called 1,358 basketball games for the program, including 104 Duke-North Carolina games, and had been at the school for four years when it hired Mike Krzyzewski in 1980.

The Hall of Fame coach says he thinks of “sustained excellence” when he thinks of Harris and adds that “without a doubt, Bob has produced some of the greatest calls in Duke history.”

Harris also enters this football season with an active streak of 459 consecutive games announced, a streak that began with Duke’s win at Tennessee on Sept. 11, 1976.

Harris was inducted into the North Carolina Sports Hall of Fame in 2006 and is a three-time winner of the state broadcaster of the year award as given by the National Sportscasters and Sportswriters Association, most recently winning in 2011.