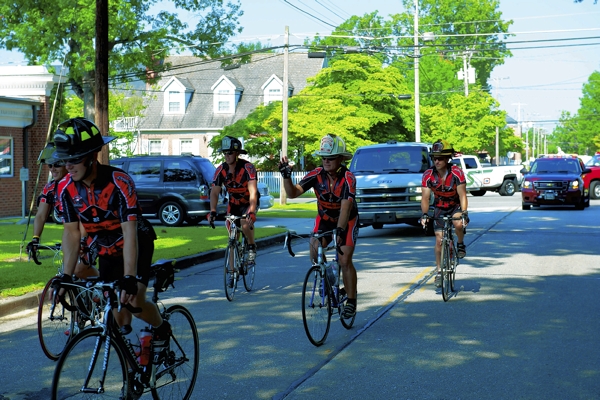 SALISBURY —  The fifth annual Carolina Brotherhood Ride, a five-day cycling event made up of firefighters and police officers from the Carolinas, will make an overnight stop in Salisbury July 27.

Salisbury will be the destination for Day 3 of the ride. That day will start in Rock Hill, S.C., and cover 90 miles to Salisbury.

Jay Baker, a division chief for the Salisbury Fire Department, has been a cyclist on each of the previous four Carolina Brotherhood rides, which began in 2012. As of now, Baker reports, the caravan coming to Salisbury that day will include 31 cyclists and 23 support personnel.

“We are still adjusting the Charlotte route due to construction and working on confirming escorts for Cabarrus County and Iredell County sheriff’s departments,” Baker said in an email.

When the cyclists pedal into Salisbury July 27, they will go to the Firefighters’ Memorial at Station 5 next to Chestnut Hill Cemetery. They will spend the night at Salisbury Civic Center before leaving the morning of July 28 for a 90-mile trek to Swepsonville.

The itinerary has the riders arriving at the Firefighters’ Memorial in Salisbury about 4:30 p.m.

In Rowan County, the cyclists will travel mostly on N.C. 152 to China Grove, then take U.S. 29 into Salisbury.

The annual ride raises money to support families of firefighters, law enforcement personnel and emergency responders who have lost their lives in the line of duty. The ride also raises awareness of these public servants in general.

Most of the cyclists have a personal fund-raising goal of $400, though they often collect more.