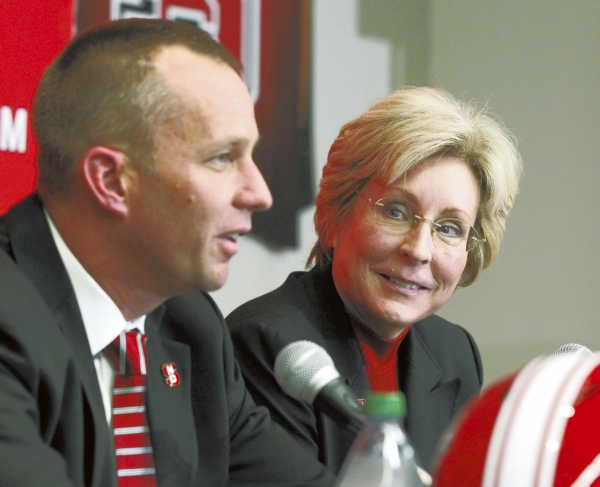 RALEIGH (AP) — North Carolina State athletic director Debbie Yow knows the work to build a national top-25 sports program is even tougher now with the Wolfpack hovering near the edge of that goal.

In fact, Yow said in an interview with The Associated Press, completing the final steps of that climb could be more difficult than it was to reach the school’s current position.

“We’re now into an area where there are very good coaches everywhere, programs that are well-resourced, facilities that are excellent,” she said. “We have to overcome all of that. We’ve got to take someone’s place. And yeah, that is our goal and I said that the day I was hired six years ago. And it still is.”

N.C. State stood at 89th in the Directors Cup rankings of Division I sports programs when Yow arrived from Maryland in the summer of 2010. It finished at No. 32 in last week’s final standings for the 2015-16 season after posting its best finish at No. 27 the year before.

The school has been ahead of the annual schedule laid out in a five-year strategic plan from 2012. The coming season is the target date to reach top-25 status.

When Yow arrived, N.C. State was coming off a season in which one team finished in the top 25 of its national rankings, while the Wolfpack spent about $78,000 annually per student-athlete, according to the school’s report to the U.S. Department of Education’s gender equity database.

The highest-profile sports had mixed results. Football made a second straight bowl appearance but fell a win shy of the previous year’s total. Both basketball programs missed the NCAA Tournament. Baseball was a regional host and a strike away from eliminating eventual College World Series champion Coastal Carolina.

Yow — a former women’s basketball coach at Kentucky, Florida and Oral Roberts — is particularly optimistic about the season ahead for both basketball programs.

Hampered by injuries and a shorthanded roster, the men’s team missed the NCAAs for the first time in five years under Mark Gottfried but welcomes Scout.com’s No. 6-ranked national recruiting class. The women’s team had a 20-win season that Yow said “without any question” deserved an NCAA bid for third-year coach Wes Moore.

That enthusiasm extends to the near-completion of a $35 million revamp to Reynolds Coliseum.

Work began in March 2015, displacing women’s basketball, volleyball, gymnastics and wrestling into temporary venues. The project included shifting the seating bowl to one end of the nearly 70-year-old campus arena, opening space for new team offices and the Wolfpack’s sports walk of fame.

Teams are due to return next month. Yow said the campus covered about $15 million to share costs with athletics in a project “on schedule and under budget, two of my favorite phrases.”

“I think we’ve maximized what it will be and can be,” she said. “Because the walk of fame and history is there, it will become important to football and men’s basketball because they’ll have big displays there. So we’ll be taking recruits in all sports through there. We’ve never had any place like that.”

By Dennis Davidson dennis.davidson@salisburypost.com Salisbury’s Nick Lyerly and Michael Childress both shot under-par rounds on Wednesday to finish near the... read more