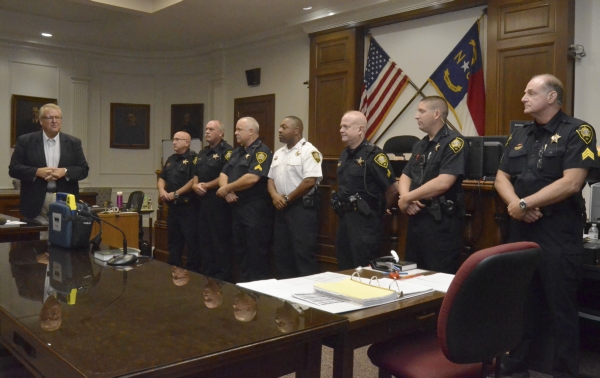 Deputies recognized for saving man after heart attack in court

Deputies Save a Life Rowan deputies Tim Cook and John Howard speak with the sisters of Gary Baldwin who they and five other deputies helpd after he suffered a heart attack in court. The sisters, Phyllis Shipp and Edith Boyd, attended a ceremony Thursday to honor the officers. Shavonne Walker/Salisbury Post

SALISBURY — Gary Baldwin will have to learn how to walk again, but he is alive. Baldwin, 67, was in court when he suddenly had a heart attack. A group of deputies sprang into action and were able to revive him until help arrived.

Seven officers were honored Thursday for their heroic efforts during a ceremony held in the very courtroom where it all unfolded.

The incident happened June 27 during a regular session of superior court. Baldwin, whose family says he did not have a history of heart issues, was in court for a 2014 case, when he didn’t look well, one of the deputies recalled.

He’d gotten up and gone outside and returned to the courtroom. A deputy checked on Baldwin, who at first was breathing and then became unresponsive. Someone else sitting near him thought the man was asleep, but Baldwin was having a heart attack. The deputies moved Baldwin from the front bench onto the floor.

His doctors would say the type of artery blockage Baldwin had is known in medical circles as the “widow maker,” since many patients with this type of heart attack don’t survive.

“With a group of everybody working together, we were able to get his breath back, get him breathing again,” said Master Deputy Tim Cook.

He said it took everyone working together to get the best outcome.

“Most of all it was the Lord. It wasn’t his time to go. He’s still living and going today,” Cook said.

Deputy Chance Williams got the automated external defibrillator (AED), attached the patches to Baldwin’s chest and let the machine do the rest.

Williams said the machine is “foolproof” and essentially tells the operator what to do and when. The machine, which is located in the hallway next to the judge’s chambers, notifies the user of how many chest compressions to perform, measures heart rhythm and then shocks the patient, if necessary.

In Baldwin’s case, Williams performed chest compressions and the machine did shock Baldwin.

Two weeks prior to this incident, Cook had received CPR training at his church and instructions on how to properly use the AED.

Cook previously had to perform CPR with individuals while a patrol officer, but never had an instance to use it while in the courtroom. Williams had been through EMT training while in the U.S. Army and has maintained his certifications.

“It’s recognizing what’s presented to you, assessing each situation,” Williams said of the incident.

Cook said the machine really made a difference, and believes the machine should be inside every building where lots of people would be gathered.

Two of Baldwin’s sisters, Phyllis Shipp and Edith Boyd, were in attendance at the ceremony.

Shipp returned to the courthouse and told a bailiff the man who’d just had a heart attack was her brother. Court staff were able get her case heard so Shipp could be by her brother’s side at the hospital.

Baldwin’s other sister, Edith Boyd, who lives in Lake Wylie, had a number of voicemails and was then able to get word to her other sisters. Baldwin is the only son with six sisters. Two of those six  sisters have died.

“It’s just amazing grace that during the time this happened that God was here with these officers,” Boyd said.

The sisters were grateful to Lt. Brian Rucker, who has called the family every day to check on Baldwin.

“There are good officers out there who care and who want to save lives,” Boyd said.

Baldwin left the courthouse and was taken immediately into surgery at Novant Health Rowan Medical Center, where he remains today. Doctors placed a stent in the artery to open the blockage.