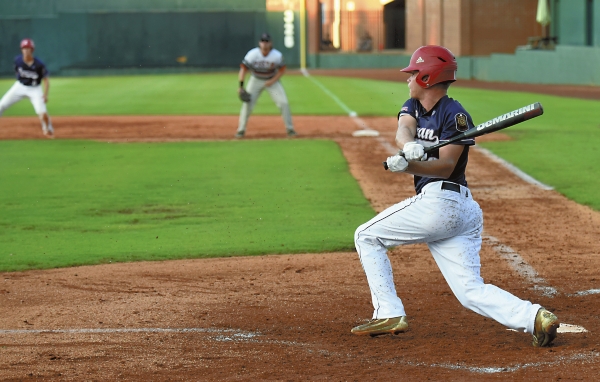 SALISBURY — Rowan County right fielder Lee Poteat’s night wasn’t perfect.
Poteat took a bad route on his way to a fifth-inning line drive and the result was a run-scoring double for Davidson County’s Michael Johnson.
That may have been the biggest play of the game because Poteat spent the rest of Wednesday’s playoff game on a mission to make up for his mistake.
“Lee came to the dugout and told everyone he wasn’t going to miss another one, and he didn’t,” Rowan coach Jim Gantt said. “He’s a great competitor, and we had to compete to win not only this game but this series. That wasn’t a normal 4 or 5 seed we were playing.”
Rowan’s hard-earned, 11-8, victory at Newman Park completed a sweep of a best-of-five series against a talented bunch that featured players from North Davidson’s 4A high school state champions.
Gantt pointed out Rowan had an enormous advantage in the series in terms of rest, particularly rested pitching arms. Davidson got the North Davidson players so late that its regular-season record wasn’t good. That meant Davidson had to play a three-game, first round series against Mooresville that went the limit, while Rowan was enjoying a bye. And then Davidson started the Rowan series without a day off.
Still, Rowan (24-8) had to play at a high level to win the series and did.
“We competed our hardest, but Rowan still beat us,” Davidson coach Dan Tricarico said. “They hit well, they pitched well, and they played tremendous defense throughout the series.”
Poteat was unbelievable in Game 3. Four hits, including two doubles and a homer. Five RBIs. Three runs scored. Three stolen bases. One amazing catch.
“It was the best night I’ve ever had on a baseball field,” Poteat said.
Poteat had a run-scoring double in the first, a two-out, two-run double in the third for a 5-0 lead, and a two-out run-scoring single in the fifth. When Poteat came to the plate leading off the seventh, the only way he was going to drive in another run was to hit the ball out of the park. So that’s what he did. It was his first homer of the summer.
“The third baseman was back, so I was going to bunt the first pitch, but it came right toward my chest and I bunted it foul in self-defense,” Poteat said. “Coach Gantt yelled for me to hit the next pitch back up the middle, and I hit it as hard as I could.”
Poteat was a part-time player for the Legion team last summer and a .233 hitter as a West Rowan High senior. But this summer he’s batting .459. He has 24 steals and 29 RBIs.
Poteat was playing toward right-center in the sixth when a lefty pulled what appeared to be a certain hit. Poteat galloped after it, snagged the ball with a dive, and held on.
“The grass was wet,” Poteat said. “I guess I just vaulted across it.”
Hunter Shepherd also was an offensive force for Rowan with three hits, three runs and two walks in his five trips to the plate. Shepherd has 48 RBIs.
Juan Garcia drove in three runs, while Brandon Walton knocked in two. Dalton Lankford scored four times.
For the third straight game, Rowan played from in front, staking lefty starter Brandon White to a 5-0 lead after three innings.
White had a perfect game for three innings and a no-hitter for four. But Davidson County had five hits in the fifth and sliced Rowan’s lead to 5-3.
“White was good, but it was hot, and he just ran out of gas,” Gantt said.
Davidson County put pressure on with its strong top of the fifth, but Rowan got two back in its half of the fifth to make it 7-3. Poteat and Walton smacked two-out RBI singles.
“That was the key to the game,” Tricarico said. “We kept battling back, but when Rowan had to answer, they always answered.”
Brett Graham relieved White, who stayed unbeaten, in the sixth, and Graham served as the bridge to Shepherd, who got the last five outs for a save.
Poteat’s majestic homer gave Rowan a 9-4 lead after seven innings, but things got nerve-wracking when Davidson (9-14) put together a gutsy eighth inning. That four-run frame included a two-out, two-run single by No.9 hitter Cole Tysinger off Shepherd that trimmed Rowan’s lead to 9-8.
Rowan’s bottom of the eighth was pivotal. With two out and none on, Lankford and Shepherd kept the inning alive with singles, and Garcia lifted a high drove off the padding on the center-field wall to score both runners and push Rowan’s lead to 11-8.
“Juan’s double a was a big stress-reliever,” Shepherd said.
Shepherd was facing the 1-2-3 hitters in the ninth, all North Davidson standouts, so it was nice to have a three-run cushion. He got the first out on a close play at first base. Rowan second baseman Tanner File made a tough stop, and Walton, the DH who replaced Shepherd at first base, made the pickup.
“That was a good play all the way around,” Shepherd said.
Shepherd got the second out on another ground ball and the final out of the series with a called strike three. Then he calmly walked off the mound, as the crowd roared.
“Shepherd is usually strong in his second inning, and he was again tonight,” Gantt said.
It was a game that will be remembered mostly for what Poteat did, although some will remember his catch and some will remember his homer.
“I’m so glad Lee had a game like that when we needed it most,” Shepherd said. “Lee can surprise you.”
•••
NOTES: Rowan will play the winner of the Randolph County-Mocksville series next. Randolph leads that series 2-0. The third round is scheduled to start on July 10.