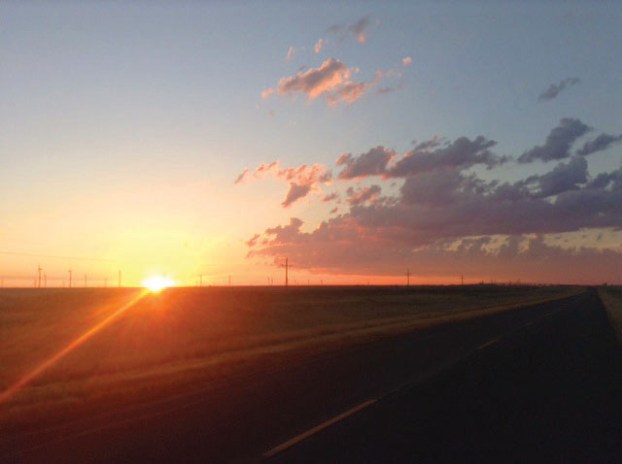 This sunrise and the build up to it brought tears to Freeze's eyes Monday morning. Photo by David Freeze.

Riding Route 66: A glorious way to start the day Just outside of Amarillo, Texas, is a row of Cadillacs buried nose first in the soil of a corn field. It’s called Cadillac Ranch. This was a promotion during the Route 66 heyday and now has been moved closer to I-40. Photo by David Freeze.

Amarillo by morning…., one of my favorite songs ever and a beautiful name for a town. I was excited to head that way this morning out of Vega and was out the door while it was still pitch dark. I dawdled to eat an egg and cheese biscuit, then could wait no more. I jumped on Route 66 and before I got out of town, two foxes ran across the road in front of me. A skunk started across and turned back. Just at the same time, a huge falling star flashed out of the sky. I knew that a special day was in store.

It was still too dark to see as I pedaled east by blind faith. The road was smooth and nearly flat and I felt great physically. The air was chilly, so cold that my hands went numb and I had to keep flexing them. Off to the north, miles and miles of giant wind generators were busy doing their work, each with a blinking red light on its nose. Ahead, one of the thunderstorms that rumbled through during the night was still flashing lightning, something that I love to see.

As the sky gradually brightened ahead, I could see that the clouds would be purple and maroon when the sun actually rose. Pedaling easily, I had just over 10 miles done by the time sunrise began. It was truly spectacular, for all the things that had already happened, but also because I knew that I was safe in God’s powerful hands this morning. Tears came to my eyes as I tried to accept all this. This may have been the best early morning ride from all my trips, and for sure it’s the one that I will remember from this trip. Not that I won’t try again tomorrow.

After Vega, a town with two decent size truck stops that attract the big rigs, now to I-40, allowing the Route 66 corridor to fade away even more. On to Wildorado, still riding on good pavement on Route 66, and I noticed the burned out motel that I had been told about. The surroundings looked like the plains of Kansas with giant, flat fields planted in summer crops. Wheat had just been harvested and lots of large combines sat parked, maybe waiting for another day of the same.

On to Bushland, now having pedaled about 18 miles while seeing two vehicles, where I stopped at a nice convenience store for food and directions. I got another of those egg, cheese and potato burritos and found out how to see the Cadillac Ranch. My map didn’t say and I wanted to see the row of Cadillacs buried by their noses, now a Mecca of sorts for Route 66 followers. I found it and walked out into the corn field with about a hundred or so early risers to see the old Cadillacs, painted countless times by spray paint since 1974. People are invited to bring their own paint and customize one or more of the cars. Most of the cars had puddles of water around them from last night’s rain, but people still painted.

Then, on to Amarillo, now a city of nearly 200,000 residents, just a little after 9 a.m. I followed Route 66 through town easily and had no traffic hassles, probably largely influenced by the Fourth of July day off. On my way out of town, I just had to see the Big Texan Steak Ranch. In the manner of oldtime Route 66, I had watched their endless stream of billboards along I-40 describe the free 72-ounce steak and the chance to see live rattlesnakes.

I found the complex, with a motel, blacksmith shop, restaurant, gift shop and more and got my picture of the live snake. I also read about the 72-ounce steak and who had eaten it and all the fixin’s the fastest since the tradition was introduced in 1960. The sign said that thousands had tried and some had managed to eat all the food. But one person, a 125-pound woman, had eaten it all in four minutes and something. She has been the grand champion for years.

Amarillo is also considered the helium capital of the world. A plant here produced 95 percent of the world’s supply until after World War ll. About 90 percent still comes from the area.

On through Conway, not much more than a crossroads, and on to Groom. Groom is where I will spend the night after 84 miles. The highs are now back up in the upper 90s and low 100s for the next few days, so I was pretty roasted by the time I got here.

With just over 500 residents in the town, I didn’t expect much but found a good motel, two convenience stores, lots of huge grain elevators, a giant cross and yes, another Dairy Queen. Those folks make the best pineapple milkshake and it makes me forget right away how hot it is. Also, the giant cross is 190 feet tall, supposedly the largest in the Western Hemisphere, and is lit at night.

I had a tailwind all day and decent roads. Not much interaction with people but some days are like that. I count this the best day of the ride so far and am looking forward to more.

Another sponsor for my adventure is Father and Son’s Produce at the intersection of Sherrills Ford Road and N.C. 150. Tim and Linda Hoffner have all the healthy fruit and produce items that you expect plus some other items too, including my books.

It may surprise you but I should close out the panhandle section of Texas tomorrow and enter Oklahoma. This will be my first time ever to visit the state. The farther east and north that I go, the more Route 66 magic will happen.

Hope you had a great Fourth of July and if you see my daughter, Ashley, wish her a happy birthday on Tuesday. Back tomorrow with more.

What does patriotism mean to you?

By Rebecca Rider rebecca.rider@salisburypost.com FAITH — If you walk the streets of Faith the day before the Fourth of July and... read more