Riding Route 66: Just having a ball 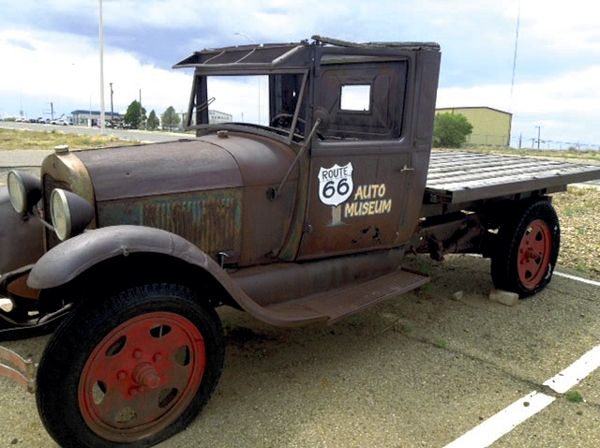 Freeze stopped at the Route 66 Auto Museum in Santa Rosa this afternoon after having it recommended. Made him wish he still had his 1966 Mustang.

Today has been just about what I describe when others ask about my cycling adventures. A little uncertainty, some physical challenge, a bit of fun and a surprise or two. My update for yesterday may have seemed a little scattered because frankly I was scattered. There was rain and big wind headed for me as I found the campground, the promised WiFi wouldn’t work well for some reason and I had just witnessed the aftermath of two accidents on the road that happened just ahead of me. Regardless, I was glad to hear that the Post had received my material.

The KOA campground that I stayed at in Romeroville was a good one, seemed well-run and certainly the staff were all great. We never got the big rain, just a few drizzles and a lot of wind. I slept great and was well rested for another early start this morning.

My Adventure Cycling map called for very limited services on today’s ride. What I found was not a single store of any kind for more than 60 miles. Thankfully, I had a few extra things and those two packs of crackers and a brownie did the job along with the reserve water that I always take. There was supposed to be a store in Dilia but it looked closed for years. Other than that, I rode up and down for 45 miles through ranching country and saw only a few cows. There were lots of working windmills and many were near the road. Traffic was light and the terrain was rolling. So, where I usually tell about the towns I pass through, there is nothing to tell today.

I did decide to spend the night in Santa Rosa, a busy little Route 66 town with lots of motels, a huge downtown lake in their park and something called the Blue Hole. The Blue Hole is 60 feet wide, 80 feet deep and the water that fills it is always blue and cold. The water temperature remains in the low 60s year round. There were lifeguards and a bunch of people who were enjoying the unusual water attraction. Santa Rosa is nicknamed the City of Natural Lakes.

After the Blue Hole, I rode through town to find my motel. In all my cycling adventures, I have never seen the size of the hill that sits right on Route 66 in the center of town. I didn’t climb anything else that hard today. The Pecos River runs right through the center of town and the big hill comes from climbing out of the river basin. This was the third time that I have crossed the Pecos and the first time that there was much eating it.

Another attraction well worth visiting is the Route 66 Auto Museum. After checking into the La Mesa Motel, another of the Route 66 holdovers, I headed right down the road to the museum. For $5, I got to see about 30 classic cars and lots of Route 66 memorabilia. I once had a ’66 Mustang and for yet another time, I realized that I should not have sold that car. Looking around the museum, I saw lots of cars owned by my friends at one time that are now worth a bunch of money. Bet they already know that.

I really like Santa Rosa because it is town that just seems to have the right feel to it and some new things going on. The street maintenance guys were extra nice when I asked directions. It is hard for me to believe the population is so small. My AT&T cellphone won’t work here, the first place that this has happened. Of course, it has been 60 miles since the last crossroads with a store and there is more of the same coming up tomorrow.

After 67 miles today, I plan to head for another little town that has ridden the Route 66 revival for all its worth. The name of tomorrow’s town is Tucumcari but it was originally called Six Shooter Siding. There is a wonderful fable about the name that I will research tomorrow. It will be my last full day in New Mexico.

Way out here in Santa Rosa, folks might be a little surprised to hear that I met Lauren Martz of Salisbury. She is out here on an internship that will allow her to become a full fledged geologist. Lauren contacted me almost as soon as I got to town. It is easy to see that Lauren is going to be a success at geology and whatever else she pursues.

Last thing for today is that you all are invited to Joseph Ward’s graduation party this afternoon.  I can’t be there so just come on. Don’t even bother to call ahead!

OK, see you tomorrow for some more fun!