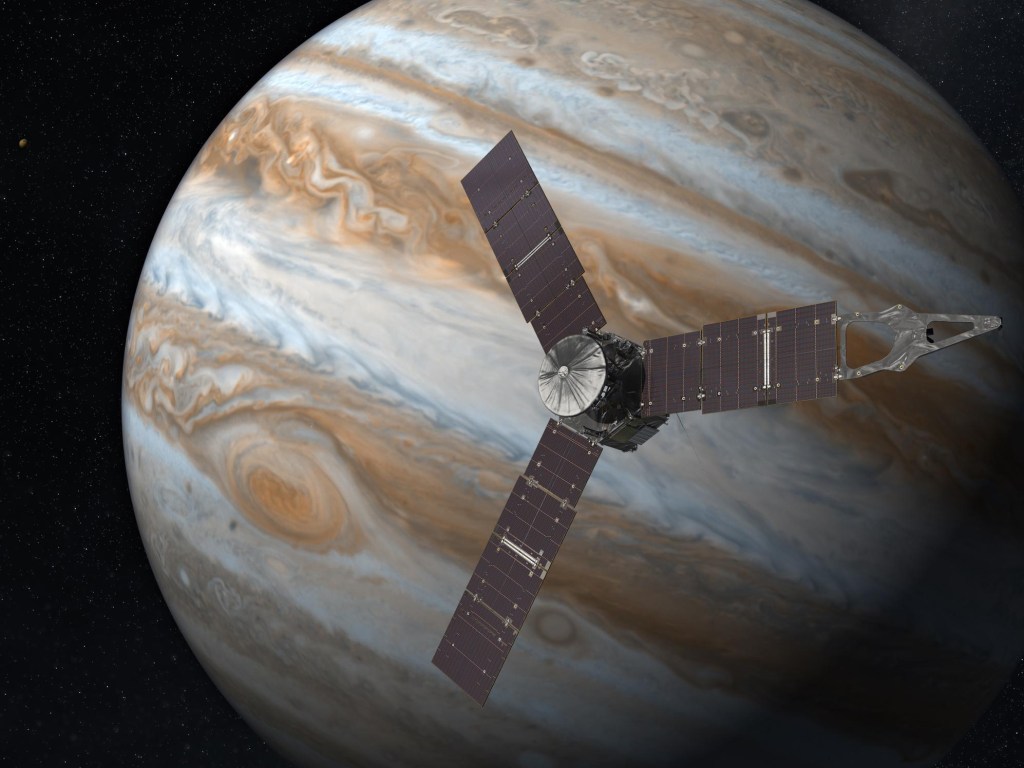 Artist's conception of Juno at Jupiter. Courtesy of NASA and JPL

The king of planets is huge on any scale. Jupiter is more than 11 times the diameter of Earth and could hold 1,300 Earths inside. It weighs more than all the other planets combined. Despite its huge size, Jupiter rotates once every 10 hours. Jupiter takes 12 years to complete one orbit at an average distance of nearly 500 million miles from the Sun. At least 67 known moons orbit the planet.

Jupiter is unlike the inner rocky planets like Earth and Mars. There is no surface we can land on. Beneath a deep atmosphere of hydrogen and helium, there are likely deep layers of liquid and metallic hydrogen, surrounding a rocky core.

Our earliest recorded observations of Jupiter date back more than 2,500 years, but we began learning more about the planet in 1610. Within a day of each other, Galileo and another astronomer named Simon Marius pointed telescopes at Jupiter and discovered the four large moons in orbit around the planet. Galileo gets credit for first discovery, but the moons carry names proposed by Marius.

About 50 years later, Cassini used a more powerful telescope to discover the colorful bands of Jupiter’s atmosphere. There is some evidence that the Great Red Spot – a huge storm twice the size of Earth, still churning today – was first seen about this time. And closely timed observations of the moons orbiting Jupiter led to the first realistic measurement of the speed of light.

During the Cold War, rapid development of rocket and satellite technology allowed the United States and the former Soviet Union to reach out into the solar system. In addition to the race to put a man on the Moon, many robotic missions were launched toward Mars and Venus. This was not too difficult to do because these neighboring planets pass within a reasonable distance of the Earth. Reaching Jupiter, however, proved to be much more of a challenge.

Two apparent problems had to be overcome. One of them was thought to be getting through the asteroid belt. However, the first Pioneer probes showed this was not such a big deal. The other problem – distance – was very real. Flying directly to Jupiter took a huge amount of fuel to get up to the necessary speed, and this was followed by a cruise of nearly two years. In the years that followed, NASA would learn to use gravitational assists, taking more time to get to Jupiter, but saving money in the process.

As the race to the Moon was coming to a close, NASA set its sights on the outer planets. In 1972, Pioneer 10 took off and became the first spacecraft to cross the asteroid belt. It was followed a year later by Pioneer 11. These two probes made discoveries, like the intense magnetic field and radiation around Jupiter, which paved the way for the famous Voyager spacecraft.

Taking a direct route like the Pioneer probes, Voyager 1 and 2 left Earth in the fall of 1977 and passed Jupiter in the spring and summer of 1979. Voyager 2 went on to visit Saturn, Uranus, and Neptune, still the only spacecraft to accomplish the so-called Grand Tour. (Although launched nearly 40 years ago, the twin Voyager spacecraft are still sending back data from the far outer reaches of our solar system.)

Until this weekend, only one spacecraft has ever orbited Jupiter. NASA launched the Galileo mission from the space shuttle Atlantis in the fall of 1989. Looping around the Sun and using gravitational assists from Venus and Earth, Galileo reached Jupiter six years later and went into orbit around its equator. This allowed the spacecraft to study both the huge planet and its four large moons. Much of our current knowledge of Jupiter comes from this mission. Galileo orbited Jupiter for eight years, returning photos and scientific data until 2003.

Several centuries of telescopic observations and nearly 50 years of space technology have been used to study Jupiter, but we still have many questions. Jupiter has a magnetic field 20,000 times stronger than Earth. What generates that tremendous strength? What are Jupiter’s north and south poles like? We have yet to see them close up.

Does Jupiter have much water or oxygen? We know the large moons have vast amounts of water ice, but we don’t know about the planet. Galileo dropped a probe into Jupiter’s atmosphere, but we didn’t find what we expected.

What is Jupiter’s structure really like? We have some ideas about that, but we are not really sure. What lies beneath all the cloud layers? What drives the huge storms in the upper atmosphere?

Perhaps our biggest unanswered question is how Jupiter formed. From Galileo, we learned the planet’s composition isn’t what we first thought. From discoveries of Jupiter-like planets orbiting close to other stars, we’ve learned that Jupiter may not have always been stationed in the outer part of our solar system. Our theories of how planetary systems formed have been called into question.

Juno is NASA’s current mission to help answer some of these questions. The spacecraft was launched from Cape Canaveral five years ago. Weighing a little less than two tons, Juno carries 11 instruments to study Jupiter’s magnetic field, peer beneath the cloud layers, analyze the aurora at the planet’s poles, and send back images of things we have not seen before.

Most of the instruments have strange sounding names, telling scientists what they do, but some of the acronyms show a sense of humor. Two of them are JADE and JEDI. Lacking a more colorful descriptor, the camera on board is simply called JunoCam.

The spacecraft itself has an interesting story behind its name. In Roman mythology, Juno was the wife of Jupiter, and it was said she could see through clouds. The instruments on the spacecraft are designed to detect what is happening beneath Jupiter’s cloud layers, so Juno is an appropriate name for the mission.

As only the second spacecraft to ever orbit Jupiter, Juno will be different from the Galileo mission. Galileo went into orbit around the equator of Jupiter, allowing it to study the four large moons orbiting the planet. Juno will be directed into a polar orbit, so that it can study the north and south poles and the magnetic field during its 37 orbits around the planet.

Juno achieves another technological first. Sunlight is very faint when it reaches Jupiter – less than four percent of what we see here on Earth – and, until recently, solar power technology has not been good enough to generate enough electricity from such faint sunlight. Juno carries newer technology that allows it to use solar power so far from the Sun.

Reaching Jupiter again will be more than just a triumph for NASA. Juno will go into orbit on the evening of July 4th. Five years after leaving Earth, Juno arrives at Jupiter just in time to help the United States celebrate its 240th birthday.

The events happen late in the day. Juno will fire its main engine about 11:18 p.m. (EDT) on Monday night. It will take about 35 minutes for the spacecraft to slow down enough to go into orbit around Jupiter. Orbital insertion will be completed shortly before midnight.

NASA will provide live coverage and commentary on Monday night. Online coverage can be seen at http://www.nasa.gov/nasatv . Live coverage is also available online at http://www.facebook.com/nasa . Coverage of the final orbital maneuver begins at 10:30 p.m. EDT.

Jack Howard ( jackthoward@earthlink.net ) is a former astronomy instructor at Rowan-Cabarrus Community College. He is a 2016 Solar System Ambassador, part of an educational outreach program sponsored by NASA and the Jet Propulsion Laboratory (http://solarsystem.nasa.gov/ssa/home.cfm ).