Cruising with the red, white and blue 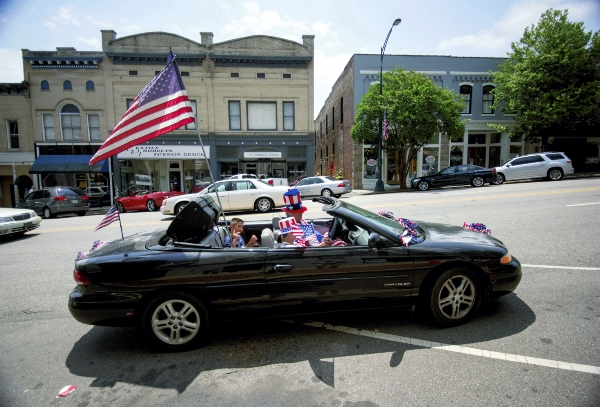 JON C. LAKEY / SALISBURY POST Randall Smith, Melanie Shorter and Jaidyn Naves got into the patriotic spirit and shared it with many people on Friday. Randall drove a convertible around downtown Salisbury playing John Philip Sousa music over a loud speaker. A one car parade. Friday, July 1, 2016, in Salisbury, N.C.

Randall Smith of Gold Hill had the top down on his 1997 Chrysler Sebring Friday, but that’s not why he and his car were drawing a lot of attention. In his head-to-toe, red-white-and-blue hat and clothes, Smith looked every bit like Uncle Sam, and his passengers, Melanie Shorter and her grandson Jaidyn Naves, were getting into the patriotic spirit, too. The car was adorned in bunting and flying a huge U.S. flag. Smith also had strapped a big Harbinger speaker to the back of his Sebring, and it was blaring John Philip Sousa marching tunes as they drove through Salisbury and other parts of Rowan County Friday for several hours. Their route included a nursing home in Spencer, and they specifically made sure to drive through the Hefner VA Medical Center campus, where the veterans loved seeing them. “The most fun we’ve had so far,” Smith announced during a lunch stop at Hap’s Grill, where Jaidyn downed a hot dog and Cheerwine. A lunch couldn’t get much more patriotic than that, Melanie said. “We just think there needs to be more patriotism demonstrated,” Smith explained, and their Friday cruising with the top down, the music blaring and the flags waving seemed like a good way to usher in the July Fourth weekend.