Childress and Lyerly tie for first, qualify for US Junior Amateur 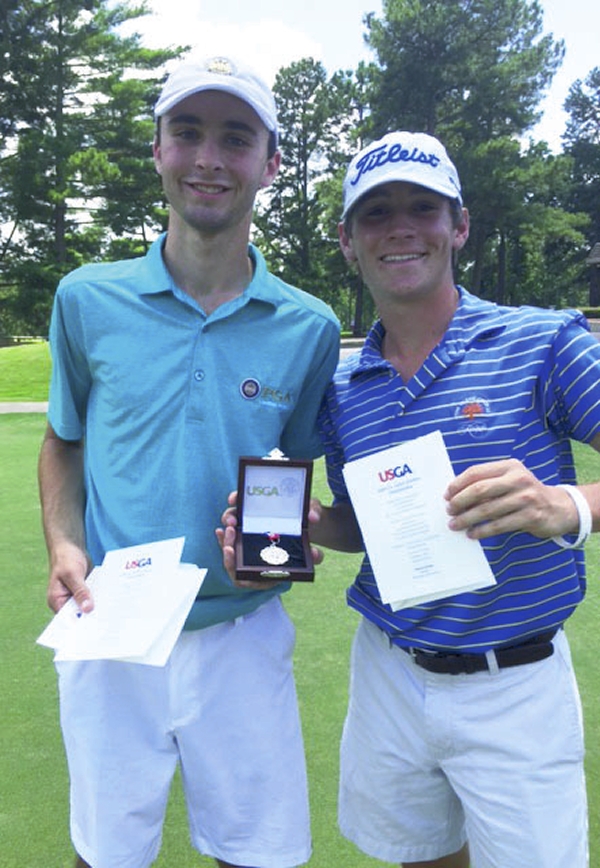 Childress and Lyerly tied for first place in the two-day qualifying event with scores of 142 and both will play in the United States Junior Amateur next month in Ooltewah, Tenn.

The 69th annual event, hosted by the USGA on July 18-23 at The Honors Course, will crown a new U.S. Junior Amateur champion.

The top five players in Asheboro qualified for the national tournament.

Childress, 16, a rising junior at Cannon School in Concord, shot a blistering 67 on Wednesday, to go along with his 75 on Tuesday.

Lyerly, 17, a rising senior at East Rowan High School, had nearly the opposite scoring of Childress for his two-day 142 score. Lyerly had the best score in the field on Tuesday with a 68, but slipped to 74 yesterday.

Bunten, a rising senior, is a teammate of Childress’ at Cannon School.

The two local golfers were among the five who move on, out of the 112 who attempted to qualify in Asheboro.
Charlie Barr, of Salisbury, finished 62nd with a 75 on Tuesday and an 83 on Wednesday. He is just a rising eight-grader at Salisbury Academy.

“Charlie’s going to be something in the future,” said Childress, a neighbor of the youngster. “He’s already really good.”

It has been a busy summer already for Lyerly and Childress. Lyerly became the youngest winner ever in the North Carolina Amateur a few weeks ago in Chapel Hill.

Both also played in last week’s North Carolina Junior Open in Wilson. Lyerly lost in the quarterfinals last Thursday, while Childress fell in the round of 16.

That loss allowed Childress to return for the Rowan Masters, which began last Friday. He had qualified as the No. 2 seed for that event.

Childress had a bad 18th hole on Tuesday, hitting a ball out of bounds, and leaving him with a 3-over 75.

“I was pretty upset on Tuesday because I knew that 3-over may be hard to come back from,” said Childress. “Honestly, I thought it was a long shot, but before the round (Wednesday), I just got into a really good mindset and told myself that ‘you’re capable of doing this.'”

Childress got off to a good start with three birdies on the front nine and even though he bogeyed the par-3 No. 12, there was time for a strong finish.

“I really got into a zone, where I just wanted to hit shots and not even think about scores,” continued Childress. “I felt like I was firing on all cylinders and the strong finish sort of proved that to be true.”

On No. 18, the trouble spot on Tuesday, a par-5, 500-yard hole, Childress pounded his driver about 320 yards, downwind from an elevated tee. He took a 7-iron in from there to within 18 feet, two-putted for his sixth birdie and a 67.

Childress said that he had no time to worry about the loss on Sunday at the Rowan Masters. He spent Monday working on his short putts at the Country Club of Salisbury with the pro there, Chad Campbell.

“Chad thought that he had seen something on Sunday, and we made an adjustment with my shoulders,” added Childress. “Something that I’ve learned is that confidence comes from knowing that you’ve put in the work in practice. It gives you the confidence to take the opportunities on the course when you have them.”

Lyerly said that he played it conservatively on Wednesday, after the first-round 68.

“I felt like I hit the ball pretty much the same both days, but I just didn’t give myself enough close birdie putts today (Wednesday),” said Lyerly. “I guess I was little conservative, but I knew that a solid round would make the top five after the 68 on the first day.”

Lyerly said that he didn’t know where he would fall within the top five and was pleased to see that Childress was the player who made the biggest move. He didn’t know until he had finished his round.

“That was great … what a round Michael had,” said Lyerly, who had six birdies on Tuesday. “I was glad to see two Salisbury guys on top.”

This will be the first U.S. Junior Amateur for both Lyerly and Childress. Lyerly was a first alternate last year, but did not get to play after just missing the top five in Asheboro.

Lyerly said the tournament in Tennessee next month will rank up there in his mind with the Big I National Championship event he played in last summer in Kansas. Lyerly’s top 10 finish there exempts him from qualifying for this year’s Big I, which will be in Sacramento.

Childress hopes to make the Big I field as well. He will play in a qualifier for that event late next week at Mid Pines Golf Club in Pinehurst.

Before that, Childress and Lyerly are in the North-South Junior Tournament at Pinehurst No. 8 and No. 2, next Monday through Wednesday.