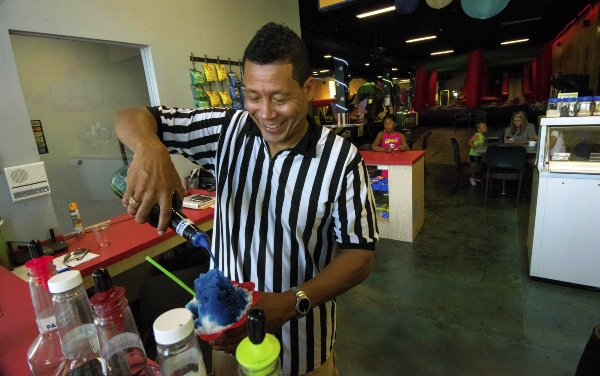 Guanah Davis puts raspberry flavor on a snowcone for one of the children. Bounce City, located on North Church Street in downtown Salisbury, has started a program to keep kids off the streets this summer. Jon C. Lakey/Salisbury Post

SALISBURY — A new program hosted by Bounce City will be starting up soon in downtown Salisbury.

Bounce City is in the planning stages of starting a multicultural coalition to hold safe events for the children and youth of Salisbury.

Back in May, a shooting was reported to have occurred at Bounce City, at 120 N. Church St. Bounce City was hosting a prom after-party during the time of the incident. Davis spoke to the Post and the Salisbury Police Department and said no such shooting occurred at her establishment.

After the accusations, Davis said she was ready to give up.

“That was a case of no good deed goes unpunished,” her husband Guanah Davis said.

Instead, Davis decided to re-evaluate her options and use the incident as inspiration and start a multicultural coalition program with the slogan, “Come to unity with the community.”

The events will start off like a block party where children can come to hang out during the summer. There may be an outdoor concert and spoken word events for the children to display their talents.

There will be adult panels with local city and business leaders, as well as youth panels where they can voice concerns and challenges they are facing.

“I want them to know that we care and are interested in their development,” Davis said.

She said the youth will be able to discuss issues like coming from single-parent homes, teenage pregnancy and what it means to make money and start a business.

Davis will then take all of the discussion points and start coming up with solutions.

There may be two to three events during the summer and the program may continue into the fall.

Davis said Bounce City has grown from having 15 patrons to 65 to more than 100.

“What we realized is, there is a demand for the youth to have something to do,” she said.

She wanted to give area youth another place to spend their time during the summer.

Young people from the ages of 17 and younger will be able to attend events during which they will do things like receive education about community resources, learn about universities and technical schools and link up with adults who can serve as mentors and model successful lifestyles.

The mission of the program is to “provide a safe, supportive place where children and youth can experience new opportunities, overcome barriers, build positive relationships and develop confidence and skills for life.”

Davis said she derived the statement from Bounce City’s business plan. When she first opened Bounce City, she opened it so that her daughter could have a place to engage with children of all ethnicities and backgrounds. Now she wants to give that opportunity to older children through the program.

She said she wants to create a “community family” and let area children “know they’re not alone.”

Davis said she grew up in Los Angeles around 25 different gangs, but because of city programs and other programs that kept her and other children occupied, she was able to stay out of that life.

“There were so many things to do in the summer,” she recalled.

Davis is hoping to bring in community sponsors, but she really hopes city officials can be involved.

She spoke at the last council meeting during the public comment portion and let the council know what she was planning and asked for the council members’ support.

“The biggest thing is their presence,” she said.

Davis hopes to host the first event in two to three weeks, with or without the help of sponsors.

She said there are other programs and people who want to do something for the youth of the community, and if they could all work together they could start making a change.

“There’s a lot of working parts,” she said, “and I think if we can get all those parts together, we can have a workable solution machine.”