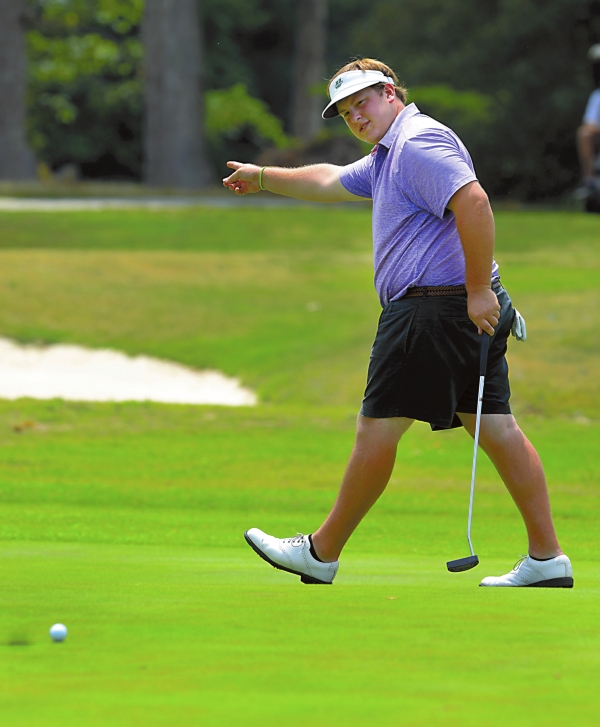 Wayne Hinshaw / for the Salisbury Post Andrew Purcell tries to guide his putt on the 11th in the Rowan Masters Golf Tournament finals at the Warrior Course. He went on to win the event.

CHINA GROVE – For this weekend at least, youth prevailed on the final day of the 14th annual Rowan Masters golf tournament at the Warrior Golf Club.

The championship went to Andrew Purcell, 21, who outlasted 16-year-old high school star Michael Childress, 2-and-1, wrapping up three grueling days of match play competition. Both were playing in their first finals of the event.

“It was tough and, at times, felt more like a pillow fight than a golf match,” said Purcell, a 2013 Carson graduate who is now a rising senior golfer at USC-Upstate in Spartanburg, S.C. “It is a good one to win. I have never been past the second round before.”

The two young golfers started Sunday morning in the semi-finals against a couple of local veteran amateur golfers, Phil Miller, 31, who won the Masters in 2013, and Richard Cobb, 52. Childress defeated Miller 3-and-2 while Purcell rolled past Cobb 5-and-3 to reach the championship match.

The tournament started on Friday with 32 players, followed by second round and quarterfinal matches on Saturday.

By the time Childress reached the finals against Purcell, he had played 41 holes on Saturday and 16 more on Sunday morning. Earlier last week, Childress competed in the N.C. Junior Amateur in Wilson, losing in the round of 16 on Thursday. Sunday marked eight straight days of match play golf in some serious heat for the rising junior at the Cannon School in Concord.

In the end, however, it was not fatigue that proved the undoing for Childress — it was a couple of missed short putts and the powerful long drives plus efficient consistency by Purcell. Childress was magnanimous in defeat.

“I have just got to get better,” he said. “I feel like everything is just so close. It is kind of a tough feeling but a rewarding feeling at the same time. I played well most of the tournament but just did not have it this afternoon and Andrew played so well.”

The championship match started well for Childress as he went 2-up after 5 but Purcell battled back with a par on the 6th and another on the eighth to even the match. It stayed that way until the 11th when Purcell clicked off three holes in a row to go 3-up with 5 to play. Childress missed a 3-foot par putt on 11 then hit out of bounds on the par three 12th to go two holes down. Then Purcell just missed an eagle putt on the par 5 13th but hit the birdie to move to 3-up.

Yet Purcell knew the match was not over, especially when Childress drained a 20-foot birdie on 14 to win. “That is the thing about match play,” Purcell said. “If you think your opponent is going to miss and make a bad shot, he will always hit a great shot. I just kept telling myself all day long he’s gonna make it, he’s gonna make it.”

Purcell reclaimed the momentum with a clutch 10-foot par putt on the 15th, and again on the 16th to keep his margin at 2-up with two to play. “I knew all I had to do was tie the 17th hole to win the match so I played it that way,” Purcell said. “It was a matter of risk and reward and I went for the reward and luckily it paid off.”

The decisive 17th hole, a par 5, was an adventure nonetheless for both golfers as Purcell drove left into the woods and Childress hit his right into the water hazard. Yet both made remarkable recovery shots to land the ball in the middle of the green in three to give each a chance at birdie. Childress had 30 feet for his birdie but the ball stopped just short. From there, Purcell calmly two putted to halve the hole and win the match, 2 and 1.

Purcell was proud to note that he never played the 18th hole in any of his matches in the tournament. “I don’t know if that means I played really well or the people I played didn’t do well,” he said. “But I was the only one in the final four that did not have to play extra holes in a match so that worked for me.”

Both young golfers have a lot left on their plate for this summer. Childress will take a day off then head for Asheboro to attempt to qualify for the U.S. Junior Amateur. He plans to play in the Horace Billings Rowan Amateur in July. Local amateurs should also be aware that Childress will team up with East Rowan’s Nick Lyerly, the newly-crowned N.C. Amateur champion, in the Labor Day Four-Ball tournament this year.

Purcell is off to Pinehurst where he will caddy for one of his college teammates in the North-South tournament. Then he will be in Hilton Head for a few weeks to work on his game, make some money caddying at Harbour Town, and get his game ready for U.S. Amateur qualifying in late July. He plans to take his Rowan Masters trophy with him and keep it in a prominent place.

In the third place match at the Masters on Sunday afternoon, Miller led most of the way to beat Cobb 3-and-1.

All results from the Rowan Masters tournament, including today’s matches, are on the Scoreboard page (Page 2B).

Rowan Masters: Four to play for title on Sunday

By David Shaw sports@salisburypost.com CHINA GROVE — There’s a target on Phil Miller’s back — and he knows it. Of... read more