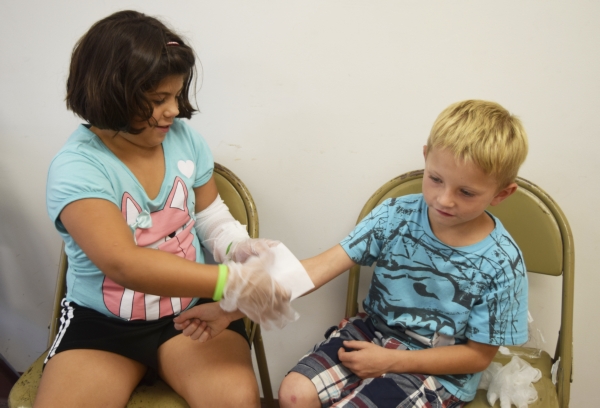 KANNAPOLIS — Heather LeMaster said that for her, doing “Camp Ready Kids” reminds her of going to camp for the first time.

“I didn’t sleep last night I was so excited,” she said.

This is the eighth year the Red Cross has run Camp Ready Kids in Kannapolis, and it’s ninth year in Cabarrus county. LeMaster, disaster program specialist for the Red Cross, said she looks forward to it every year.

The free two-day experience, this year offered at New Hope Lutheran Church, is offered to rising first graders through rising fifth graders, and is supported by local police and fire departments and ServePro. While the camp includes fun games, it also equips students to deal with emergencies.

Breakout sessions teach valuable fire safety tips, first aid skills and help kids come up with an emergency plan for everything from thunderstorms to house fires.

“Really the reason we do it is so that they can take it home,” LeMaster said.

A lot of times, it’s the kids who will wake a family up if there’s a fire. And even if there’s no emergency, it’s a chance for parents to get a refresher course in safety, Maria Bostian with the Kannapolis City Fire Department said.

“How long has it been since you’ve stopped, dropped and rolled?” She asked.

Bostian has been working with Camp Ready Kids since its first year in Kannapolis.

Camp Ready Kids also provides a place for children to have positive interactions with police and fire personnel. Many children only see police or firemen on the news, or during experiences that are often traumatic — but at Camp Ready Kids, officers and firemen eat lunch with the campers, play games with them and talk about their roles in the community.

Jennifer Mackey is a school resource officer at Kannapolis Intermediate School, and has been working with Camp Ready Kids for several years.

She talks to campers about bullying, internet and gun safety, when to call 911 and tells them what it’s like to work as a police officer.

Chalmers Bankhead, IV has been attending Camp Ready Kids for three years, and is one of many repeat campers. He said having an emergency plan in case of a fire or other emergency makes him feel safe and prepared.

“It makes me feel protected,” he said.

For those who run Camp Ready Kids, Bankhead is the ideal student — he took what he learned to heart and taught his family.

“Really the reason we do it is so that they can take it home,” LeMaster said.

Upcoming camps in Rowan and Cabarrus counties are: