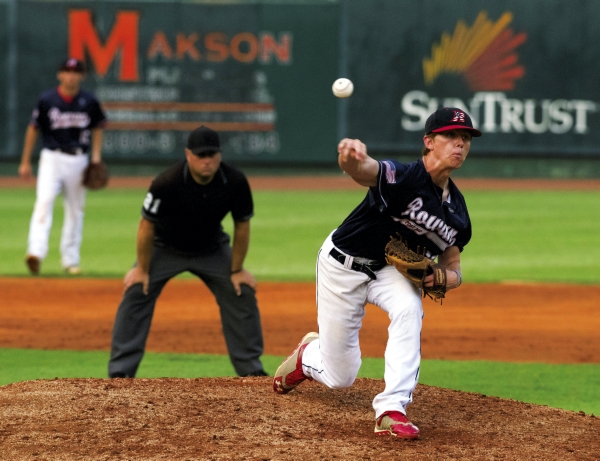 SALISBURY — John Owen accepted the Patrick Snider Memorial Award as Rowan County Pitcher of the Year for the high school season prior to Thursday’s game with Mooresville at Newman Park, and then he went out and got his first win of the American Legion season.
“It was John’s night, and that had to be a little pressure on him to pitch after he got that award,” Rowan second baseman Tanner File said. “But he showed out. He pitched good.”
Owen (1-1), a rising senior at East Rowan, threw five shutout innings, but there were times during a 7-4 victory that Owen was ducking line drives and thanking his defense.
Mooresville (8-8, 3-6) wasn’t fooled often, but Owen got plenty of help from his friends. Chandler Blackwelder chased down a wicked drive to left-center to end the third inning, and Rowan catcher Jake Pritchard gunned down two aggressive Mooresville runners on the basepaths.
” I could get two quick outs, but then it was like I was too anxious to get back to the dugout and I couldn’t get that third one,” Owen said. “I missed a few sports and they’ve got good hitters. It seemed like they’d get two hits every inning.”
The most crucial pitch Owen threw was a 3-and-2 curveball to Nick Pasco, Mooresville’s powerful cleanup hitter, with two out and two on in the fifth. Pasco rapped a weak bouncer right back to Owen.
“That was probably the biggest pitch of the ballgame,” Rowan coach Jim Gantt said.
The difference was Rowan County’s four-run first inning against losing pitcher Jake Kaufman. Lee Poteat’s one-out triple off the center-field wall triggered the big inning. Poteat’s West Rowan teammate Kacey Otto plays center field for Mooresville and had to pursue the ball while Poteat sprinted.
“It was almost a homer, but I think I’d rather have the triple,” Poteat said with a smile. “It made Kacey run around a little bit.”
Poteat scored on a wild pitch, and then three walks filled the bases. Seth Cauble’s solid single made it 2-0, and then Tanner File hammered a two-run single to right-center to make it 4-0. That was a huge two out hit by File. He batted under .200 for East in the high school season, but he’s been a solid player in Legion ball.
“The only adjustment I’ve made is closing my stance a little bit,” File said. “It’s been working.”
Hunter Shepherd’s run-scoring double in the fifth bumped Rowan’s lead to 5-0, but Mooresville reliever Jared Stukbauer was effective. He started putting up zeroes and he kept his team in the game.
After the first two Mooresville hitters in the sixth reached base, Owen’s night was over. Gantt turned to Caleb Link, and Link got three outs with a couple of pitches. The key was a sliding catch in short right field by Poteat, who then doubled the runner off first.
“I didn’t know if I was going to be able to catch that ball, but I still felt like I’d be able to get a force out at second base even if the ball fell,” Poteat said.
Brandon Walton turned in solid relief. Juan Garcia started an around-the-horn DP to back Walton in the seventh, but Pasco hit a bloop single to left to get Mooresville on the board.
Rowan (15-7, 6-0) made it 6-1 in the bottom of the seventh when Noah Gonzalez executed perfctly on a hit-and-run to drive in a run.
After Walton struck out the side in the top of the eighth, Trevor Atwood whacked a run-scoring double off the wall in the bottom of the eighth to make it 7-1.
It was a long, sweltering night and many fans had headed for the parking lot when Mooresville came to bat in the ninth against Shepherd, Rowan’s closer.
But Hunter Dula’s leadoff double triggered a three-run inning and Mooresville hitters and Rowan fielders combined to make things interesting. Mooresville had the tying run at the plate when Shepherd finally ended the game on a strikeout, his third of the inning.
“We had some quality at-bats, got some timely hits and we had a lot of pitchers compete and make good pitches,” Gantt said. “Shepherd made good pitches in the ninth, but that’s a good Mooresville team and they put the ball in play. We’ve been lucky to beat them three times.”
The Fat Lady finally sang, but she may have sweated off 50 pounds during the three-hour contest.
Rowan won its fifth straight game and takes on Davidson County tonight at Newman Park in a non-division game.