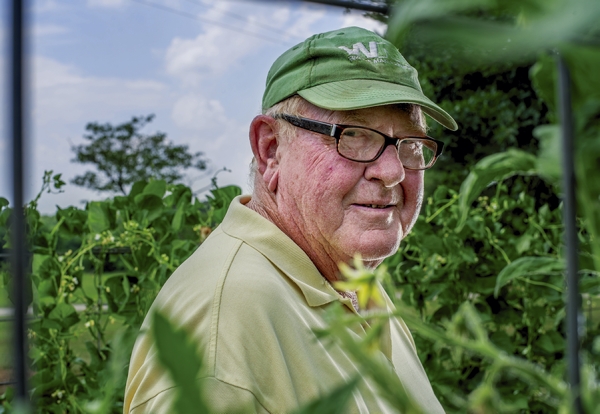 It’s the garden that keeps him here Beyond the swing in the deep shade, there’s a sunny garden patch, and in the workshop next to it, you’ll find jars of pickles, beans and tomatoes and a canning setup.

On this day it’s hot, hot, hot in that workshop. You can just imagine what it feels like during canning season.

It’s a little less hot in the garden, but the vegetables are lucky. They’re watered regularly with a soaker hose.

That would explain why the tomatoes are almost 6 feet tall, and loaded with green fruit. The corn cobs are formed and filling out. The squash plants are huge and full of blossoms. Green beans are hiding under the leaves, too. There’s a row of lettuce that’s done for the year but still looks pretty.

Harold Watson is the quiet type. He likes his garden, and his daughter and niece help him put up all the good stuff that’s coming.

His dill pickles are delicious, seasoned with garlic, a little jalapeño and dill, among other things.

Harold is originally from the Woodleaf area and moved back once he retired from Waste Management. He’s still a consultant and travels some for the company.

He’s not one to brag, but he is pretty proud of his garden, the tomatoes growing on a trellis, along with the beans.

There’s a sly smile on his face almost all the time.

He has 72 tomato plants, and says his daughter likes to make salsa.

It’s his project, he says. “If it rains, it grows.” But he does water at least twice a week with the soaker. He doesn’t want to get the leaves wet, that can invite diseases. He says if the tomatoes get wet, they will start cracking. He grows Pink Girls, exclusively, because that’s what he likes. “It’s a sweet, pink tomato.

“There’s so many tomatoes, they’re not much size,” he says.

“I’m always planting something, I grew up on a farm. You had to have a garden to eat.”

When it all comes in, he gets busy. He canned 14 quarts of beans not long ago. His niece, Louise Beam, helps him out.

Also in that workshop are damson and grape jelly. He’s done 25 quarts of pickles this year, and expects about 75 quarts of tomatoes, salsa and such. Some tomatoes become juice.

He is one of 14 children, and had several brothers who liked to compete in growing the best garden.

He mentions his brother John Watson, who for years brought his pickup loaded with produce, especially cantaloupes, downtown to sell to the people who worked there. He was a regular at the Salisbury Post.

Harold has already grown cabbage, broccoli and spinach, and says the spinach was especially good. He had onions and lettuce, too. One head of his broccoli weighed in at 6 pounds, so he must be doing something right. He freezes the broccoli. “That’s one you can’t can, not really.”

The big oak, with leaves the size of platters, was struck by lightning years ago. You can see the long scar on one side, and note how the bark has grown over part of it. The lawn is soft grass that he says “is burned up.”

Hopping on his golf cart, he passes by Mabel the beagle and heads to the other side of the yard, where he’s planted another patch, the watermelon and cantaloupe, and more corn for later in the year.

He expects “a whole bunch of okra.” He’s got a small apple tree and a peach tree that looks good but has no peaches due to the freeze this spring.

The neighbor has apples, though, and they make pies and cooked apples. And there are figs. “I love figs,” he says.

Harold’s house displays quite a few fishing photos, and that’s something he does as much as he can.

“Sometimes I think I might sell this place. I like to travel. I like to go fishing.” but he also likes that garden. He gives a short tour of the remodeled house, now very like a man cave, with leather furniture, slate tile, dark wood and a large television. there’s a bar tucked into the spot between the den and the kitchen. “I get some use out of that,” Harold says, the smile getting a little bigger.

In front of the remodeled house, he’s planted zinnias and petunias in the red clay.

He and two sisters are still living, and he competes with them growing flowers, he says, laughing. “I don’t tell ’em I’m watering.”

It’s not a bad life here at all, he confides, sitting in the swing under the oak. “Some days, this is all I do.”