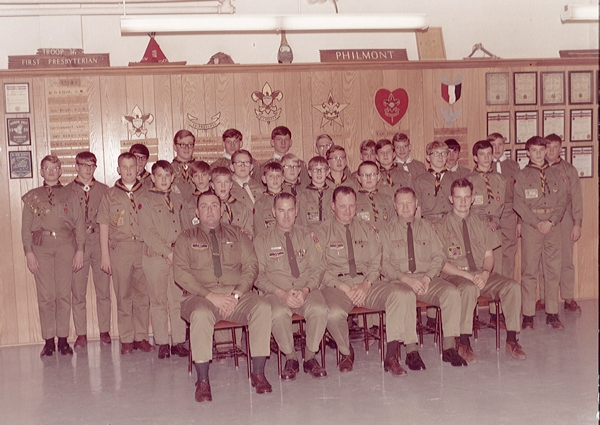 With archery badges and campfire tales, a Kannapolis lad’s days in the Boy Scouts prepared him for anything.

Over the past 50 years, the Boy Scouts of America has seen many changes; however, one local tradition born in 1967 has not changed. Troop 36, sponsored by the First Presbyterian Church in Kannapolis, began hiking 35 miles each year to Camp John J. Barnhardt in Badin. As many as 50 scouts have hiked at one time or as few as five, but the hike has amazingly continued. The 50th hike will begin Friday, on Iris Avenue in Kannapolis, at the home of R. Don Efird, the first scoutmaster to lead the hike. He will gather with former scouts and scoutmasters on Friday night in Gold Hill to celebrate the golden anniversary of the hike at the Tracy Culp Cabin and pond, where for many years the troop camped en route to Camp Barnhardt. The following article appeared in Our State Magazine 10 years ago.

Not long ago, I discovered my Boy Scout merit badge sash tucked away in a dresser. Unfolding the sash, I realized that the only tangible memories of those carefree years spent as a disciple of the Boy Scouts of America were those little embroidered badges, slightly bigger than quarters and neatly sewn in rows of three, each holding a story of personal triumph – and sometimes trial. Camping, hiking and swimming are just a few of the grouped collection, which I earned during five years of Thursday night scout meetings and annual trips to summer camp. The sash no longer fits over my shoulders. Although I’ve outgrown this part of my uniform, I’m glad I haven’t outgrown all that scouting taught me.

As far as scout troops go, the members of my Kannapolis troop “humbly” considered ourselves to be a cut above the rest. Numbering about 40 scouts in the late 1960s, we were always the biggest troop at weekend camporees, consistently taking home the most ribbons for our outstanding performances. In fact, nothing but blue ribbons were acceptable to any of us. Red was an embarrassment, and yellow would have been an abomination. We had a reputation to uphold, and we took it seriously. We were, after all, “Troop 36.” Our name was our cherished trademark, and we always wanted to live up to it.

Our leaders were the reason we succeeded, no doubt. They gave us the best of everything, but most of all they gave us their time. We thought our scoutmaster was a clone of John Wayne. Not only did he look and talk like the “Duke,” he knew how to motivate us as well, if not through his rugged persona, through his metaphorical humor. He was a walking thesaurus of southern phrases, filled with those colorful expressions and similes strictly indigenous to this part of the country. They were never canned or forced, but always spiced up his conversations like small squirts of Texas Pete on generous helpings of mushy black-eyed peas. If anyone else had tried to say them, they wouldn’t have had the same sense of life or passion. He epitomized the “man’s man,” and we were glad to follow wherever he led us.

Over the years, many of us accepted the scout challenge of hiking more than 100 miles in a single year. Some of our scouts went to Philmont Scout Ranch, way out in New Mexico, to add to their ambulatory odometers. Most of our hikes, although challenging, were local, taking us across private farmland, through muddy creeks, under barbed-wire fences and across occupied pastures containing not-so-friendly bulls.

We made a few trips to Myrtle Beach and other sites of interest, riding to those locations in the luxury of our ’53 Chevy bus. One summer we hiked all the way up Mount Mitchell, which made us all grateful that we lived in the Piedmont. Other trips found us turning purple in the frigid waters of clear mountain creeks, which left us breathless after we finally had the courage to submerge ourselves in their currents.

Each June, we undertook our troop’s biggest claim to scout fame, a 35-mile hike from Kannapolis, through parts of Cabarrus, Rowan and Stanly counties, to our final destination: the Cherokee Campsite at Camp John J. Barnhardt in Badin. We felt this particular campsite was the premier location on the 1,000-acre scout reservation, and we believed we owned the spot — clearly the other troops deferred to our superiority, allowing us to claim the site uncontested. (In reality, our scoutmaster reserved the campsite the year before, but we liked thinking otherwise).

After hiking the first 18 miles on our way to camp, and knowing we had 17 more the very next day, sleeping was usually not a problem. One memorable year, the troop bedded down in a graveyard. Rather than sleep inside a church fellowship hall that had been offered to us for shelter, we wanted to sleep under the stars, out in the church cemetery, although the grown-ups opted for the coziness of a concrete floor with a roof over their heads.

The cemetery made a great atmosphere for tall tales and ghost stories – at least until after midnight, when some local hooligans decided to drive their daddies’ trucks and tractors down the road, welcoming us to their neighborhood by yelling idle threats and waving pitchforks. As the night wore on, it became the “mill town boys” against the “country boys” in an unofficial game of hide-and-seek. It was a night none of us ever forgot, and I don’t think any of us have ever slept in a graveyard again.

The feeling of accomplishment after hiking 35 miles in two days always set the stage for a productive week at camp, where we would work on merit badges like Canoeing, Riflery, and Archery and conquer menacing obstacle courses, precarious monkey bridges and ominous rappelling towers.

One of my favorite activities was the “mile swim,” which we did in Badin Lake. It was not as impressive as trained swimmers competing in a 1,600-meter freestyle event at a swim meet; we were just trying to swim the whole mile in that murky lake, any way we could, and not disappear somewhere in the middle. We always received a “mile swim” patch as a reward for our aquatic efforts, which we gladly added to the personal piles of patches we collected over our years in scouting.

The hike to Camp Barnhardt started in the summer of 1967 and has continued every summer since. In 1992, former scouts were invited to join the younger ones to make the trek again, as a reunion, since it was the 25th anniversary of “the hike.” On the anniversary hike, we all wore orange caps, which made us look like the world’s longest coral snake as we stretched and wound our way through towering cornfields, where most of the green stalks were taller than all the boys and most of the men. There was never anything easy about our hikes, but the challenge was part of the fun.

During my scouting days, my friends couldn’t understand when I would try to explain what “being in scouts” was really like. All they could envision was a bunch of boys running around in shorts and tasseled kneesocks trying to start campfires with stick and rocks. But whenever one of our troop attained the coveted rank of Eagle, we realized once again that all our work and play had a purpose. Most universities want to know if a prospective student is an Eagle Scout. As a mark of distinction, it ranks right up there with student council president or captain of the football team.

The hikes, the campouts, the merit badges, the scout oaths and the simple camaraderie of 40 boys about to leave childhood behind gave us an inner strength that we didn’t know we had until it was tested later in our lives. The embroidered badges we so painstakingly earned weren’t merely rounded pieces of stitched cloth, sewn onto army green sashes by our mothers; they represented the character traits and necessary skills we would need to become men ourselves.