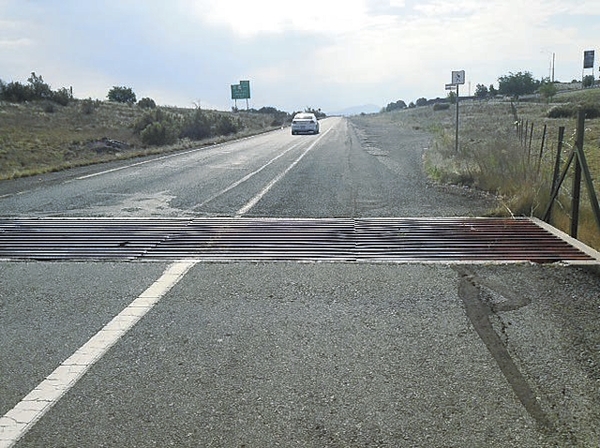 Cattle guards on the Interstate 40 ramps. Photo by David Freeze

Riding Route 66: Having a ball and heading for the Grand Canyon

I have just arrived in Williams, Arizona, now a candidate for one of my favorites on this adventure. Williams is the jumping off point for the Grand Canyon and also has a significant love affair with Route 66.

This morning, I left Seligman with just enough light to see. Seligman also has a love affair with Route 66, but I can see some differences. The motels are plentiful but pricey in Seligman. Water and convenience store items are also pricey, as much as double what they are at home. I didn’t get to the Snow Cap Drive-In but after reading Mark Wineka’s story, I wish I had. Seligman is definitely a fun place, but to be honest, I didn’t have enough time to get to know the town well. They do have a brand new Family Dollar where I bought some items.

As soon as I left Seligman, the climbing started. And it never stopped. Serious, low gear, sweating and quads-hurting climbing. I rode through Ash Fork where something super special happened. Twice over the last few days, I was passed quite easily by a cyclist wearing a huge backpack and riding a road bike. He didn’t stop to talk, but was pleasant as he rode by. Yesterday afternoon, I found a small bag with a jacket inside of it along the road just before the Grand Canyon Caverns, home of the $2.85 water bottle. I went back and picked the jacket up and stuck it in with my stuff. This morning, I found the cyclist at the store in Ash Fork and asked if he had lost a jacket. Yes, he had, and a wonderful conversation ensued. Bardo Weryor of Mainz, Germany, is visiting here and is riding from L.A. to Denver. He has a bike that weighs about the same as two of my full water bottles. With his jacket recovered, Bardo rode away all smiles after we said, “Safe Travels!” to each other.

Afterwards, the climbing began in earnest as I was back on Interstate 40. I loved it that the trucks were struggling, too. After just 43 miles for the day, I will spend tonight in Williams. After being told last night by phone that there were no “less-than-$100 rooms in Williams” and that this was the busy season locally, I of course found one and made a great deal. The place is fantastic, too. The name of the motel is the Highlander and is right on Route 66. Worth stopping if you are over this way.

Tomorrow, I am going to the Grand Canyon by train. The train loads right in the center of town and right by Route 66. I will get the train ride and a tour that will take me to several places by shuttle bus before the train returns. Everybody I meet tells me that the Grand Canyon is so spectacular, and I can’t wait to see it up close.

I met Glenn and Linda Morton from Maryville, Tennessee, right after we all bought tickets. Glenn used to work in radio, and the Mortons knew where Salisbury is. Word has gotten around that there will be another gunfight in the morning at 9 a.m. The only two places that have regular gunfights, Oatman and Williams, just happened to be right after huge and hot climbs on my bike. Might be worth a try to get the gunfighters to ride a bike up a couple thousand feet or so in elevation and then they wouldn’t care about shooting it out.

A first for this morning’s ride was finding cattle guards on the entrance ramps to Interstate 40. They do let bikes ride, but I guess no cows are allowed unless they are already in cars or maybe on their own bike.

The train whistle is blowing. I’m going out to watch it come in. There is a Dairy Queen and my first real grocery store next door on one side, and a pancake house on the other side. Plus the temperature moderated today. Is it possible to have too much fun? See you tomorrow with a report on the Grand Canyon. Linda and Glenn Morton of Maryville, Tennessee will also ride the train tomorrow to the Grand Canyon. Photo by David Freeze

SALISBURY — Rowan-Salisbury students are gearing up and ready for the Summer Reading Challenge. When students return to school in... read more