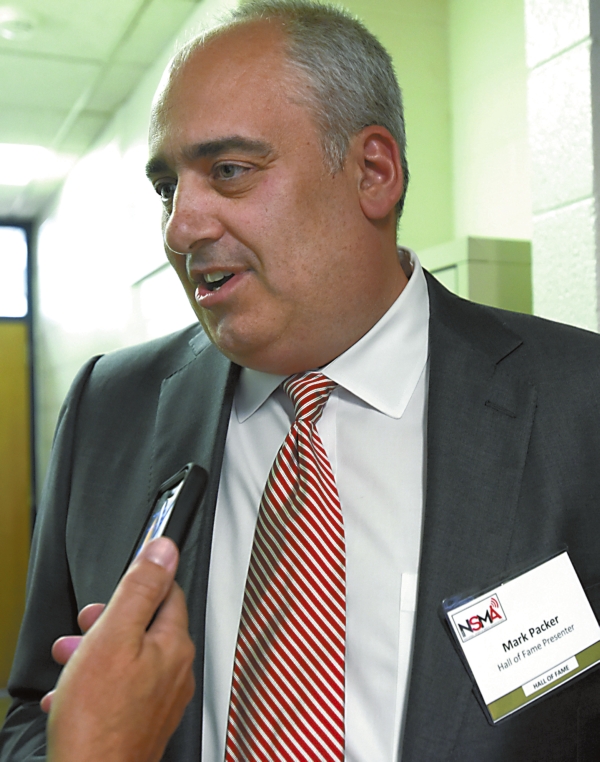 SALISBURY — Mark Packer — “Packman” — had a pretty big following in Rowan County while he was on the air for WFNZ in Charlotte for 13 years.

It was the best way to get a sports talk radio fix, even if it was on the AM dial.

When Packman did a live remote prior to Catawba’s nationally-televised football game against Mars Hill in 2007, fans flocked to his tent to see him and to grab a “Southern Fried Football” T-shirt or can koozie.

And while Packer may have lost some local listeners who do not have satellite radio, he has gained plenty in other places. With Sirius XM radio, he goes national. And he is loving his job.

“I basically do a national show from the comfort of home and have eliminated all office politics, all that other nonsense,” said Packer. “I just go on the air every day and talk sports and it could not be any easier.

“I work with great people, there’s no commute, no headaches and I don’t have to worry about signal issues,” he continued. “Other than maybe the dogs licking my feet or barking during the show, because they’re part of the show, too. I couldn’t have a better gig than Sirius XM radio.”

Obviously, Packer takes the show on the road for big events, such as Clemson’s appearance in the national football championship game in Arizona last January.

Being on satellite radio allowed Packer to keep his home in Charlotte, which is just fine with his wife, Amie, and two daughters, G.G. and Emerson. One daughter just finished her freshman year at Clemson and the other will be a high school senior in August.

The family was in Salisbury on Monday evening, on a night that belonged clearly to Mark’s father, Billy. The elder Packer was inducted into the National Sports Media Association’s Hall of Fame for his 35 years as a TV college basketball analyst.

Mark and his brother, Brandt, were the presenters for their father before his induction at Goodman Gym.

It wasn’t Mark’s first visit to the Catawba gym. Before playing on the golf team at Clemson and launching his career, Mark played in the annual Christmas Tournament as a member of the Davie County High School basketball squad.

Billy Packer played basketball at Wake Forest, leading the Demon Deacons to the Final Four in 1962. So was Mark the star of that Davie County team in 1980?

“Not even close,” said Mark. “I couldn’t play a lick. That seems like about 100 years ago. Basketball was just something to do in the winter time. Golf was my game in high school.”

Mark played golf for Davie before graduating in 1981. He was on the golf team at Clemson, though he was not a scholarship player. “They had some real players there who go the scholarships, but I loved it.”

He visited Clemson and knew immediately it was the school for him.

“I was a big N.C. State fan growing up as a kid, but the girl I was dating in high school had a lot of relatives in Greenville and Greenwood,” remembers Mark. “We went down there for a big college football game. I sat on the hill in Death Valley and I had never seen anything like it. I was hooked.”

Billy Packer probably thought Mark would be going to N.C. State or one of the other Big Four schools.

“I got home from that trip and Billy and Barb were sitting in the breakfast nook and dad asked, ‘how did you like Clemson?'” Mark recalled. “I told them that I think I know where I’m going to school and I thought he was going to fall off his chair. He said ‘you’ve got to be kidding me.’ But I loved Clemson.”

Packman earned an economics degree at Clemson, so he figured he would work in some business aspect of sports. He said that he never thought about being an on-air personality.

“I never wanted to do this … this is a  pure fluke that I got into sports talk radio,” said Packer. “I liked the business of sports but never had any interest in doing anything on air — radio or TV — or anything else. It just sort of fell into my lap when I was putting together some radio deals and sponsorship packages. It took off and I said alright, ‘if you going to do, let’s do it right,’ and the rest is history. But again, I never, ever dreamed of doing this for a living.”

Billy Packer has called into Mark’s show from time to time, but they don’t always agree.

“We would argue just like we do at Thanksgiving dinner and realized I didn’t want him as a guest very often because an argument could break out at any point in time,” laughed Mark.

But Monday was Billy’s night and it was obvious that Mark was very proud of his father’s accomplishment.

“You go down the long line of folks who’ve gone into this Hall of Fame, it’s pretty impressive,” Mark said. “For years, he did his dog and pony show in college basketball and he loved doing it. And he was great at it. It’s a well deserved honor.”

By Mike London mike.london@salisburypost.com SALISBURY — Brandt Packer went to college at the University of Tennessee mostly because he needed a... read more