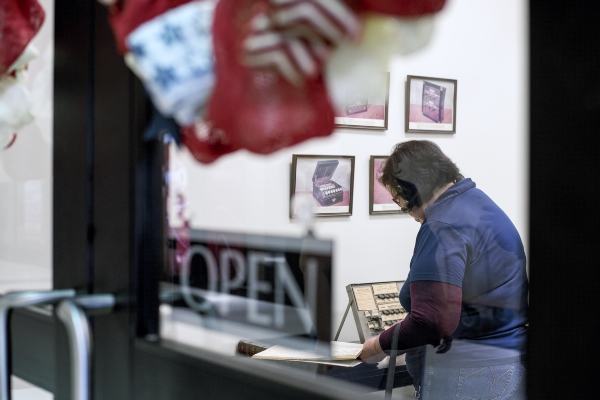 Cathy Barringer looks through Rockwell’s Precinct Registration Book from 1967 at the grand opening of the Rowan County Board of Elections office at West End Plaza in Salisbury on Tuesday. Allison Lee Isley/Salisbury Post

SALISBURY — It wasn’t long ago that Veteran Services Officer Rick Johnson regularly searched the halls of Rufty-Holmes Senior Center to use any office available.

Until one year ago, Rowan County Veteran Services consisted of two employees in a room measuring less than 300 feet. With no individual offices, privacy was a concern whenever veteran services officers handled cases.

“I had to take my laptop and just go down the hallway to find an office,” Johnson said.

Laws preventing the disclosure of private health information meant that Johnson and Veteran Services Officer Elaine Howle couldn’t be in the same room if both were with a client.

For the past few years, county commissioners have looked for ways to provide new space for Veteran Services and the Board of Elections — another department that faced a space crunch.

Veteran Services got a temporary reprieve in 2015, when County Manager Aaron Church moved the department to a building on Old Concord Road.

More than two years later, the first two government tenants on Monday held grand openings in newly finished, and permanent office facilities. The Board of Elections moved into its new office before the June 7 election. Veteran Services is a more recent addition. Both now have significantly more space than at their previous facilities.

County Commissioner Mike Caskey, who was in office when West End Plaza was purchased, said it took longer than he wanted to move government departments into the former mall. However, Caskey said the end result “turned out great.”

“It shows what we can do with the rest of the building,” he said.

Veterans who attended the grand opening said they were satisfied to see the significant amount of space available in the new facility. Marine Corps veteran Jerry Griffith said the Rufty-Holmes Senior Center office “was awful for privacy.” By comparison, he called the new office “perfect.”

The additional office space has also enabled Veteran Services to add a secretary, said the department’s director Gary Price. Now, the department can handle calls and walk-ins if Howle and Johnson are with clients, Price said.

As of Tuesday, both departments will permanently be located at West End Plaza. Commissioners haven’t settled on the next government departments to move in, but candidates include Social Services and the Health Department.