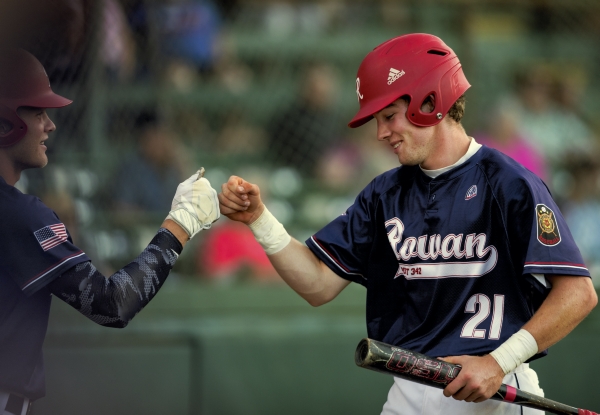 ALBEMARLE — Knee surgery limited Brandon White to cheering for Rowan County’s American Legion state-championship team last summer, but this summer he’s making a more tangible contribution.
A recent North Rowan graduate who signed with Belmont Abbey, White threw a complete game on Wednesday, as Rowan rolled, 7-1, against Stanly County here at Don Montgomery Park.
White is a different hurler now than Rowan County fans saw two years ago when he went 3-1 in Legion ball. He still has a good breaking ball and sharp control, but his fastball velocity has picked up considerably due to added conditioning, strength and maturity.
Rowan (14-7, 5-0) stayed unbeaten in the Southern Division of Area III and won its fourth straight outing. Rowan has gotten four straight outstanding pitching efforts from starters Joe Harrison, Sawyer Strickland, Bryan Ketchie, and now, White.
White, the Central Carolina Conference Pitcher of the Year for the Cavaliers, is 4-0 this summer.
“I loved playing Legion baseball before I got hurt, and it’s great to be back out there and to be back with the guys,” White said. “Winning Legion ballgames is always special.”
White knew he had the stuff to go all the way early in Wednesday’s game. He got the defensive help he needed from Rowan outfielders Lee Poteat, Chandler Blackwelder, Seth Cauble and Noah Gonzalez, who entered the game late in left field.
“We’ve got a lot of speed out there, and all four of those guys made good plays for me,” White said. “I stayed ahead of hitters and stayed locked in. I pitched to contact. I was able to do what I do.”
Rowan’s offense got rolling early against Matt Lambert, who started on the mound for Stanly (5-9, 2-4). Rowan built a 5-0 lead after three innings on sacrifice flies by Hunter Shepherd and Cauble, a run-scoring hit by Juan Garcia and a two-run single by Blackwelder.
Rowan added a run in the eighth when Shepherd grounded out with the bases loaded and made it 7-1 in the ninth when Brandon Walton trotted home on a wild pitch.
Garcia and Blackwelder produced three hits each.
Stanly’s lone run came in the fifth when Lambert scored with the aid of an errant pickoff throw, so White didn’t allow an earned run. White allowed seven hits and struck out five. He worked out of a jam in the first and stranded two Stanly runners in the seventh, when Stanly still had a chance to rally.
White’s fifth strikeout ended the game and came on his 93rd pitch. It was an efficient night for the stocky southpaw.
“It was a 1-2 count,” White said. “I was able to hit the outside corner for the strikeout. That was a nice way to end it.”
Rowan returns home to Newman Park tonight for a divisional game against Mooresville. Rowan will host Davidson County, a Northern Division team, on Friday and will play two early games in a Saturday doubleheader (10 a.m.and 1 p.m.) at Shelby.