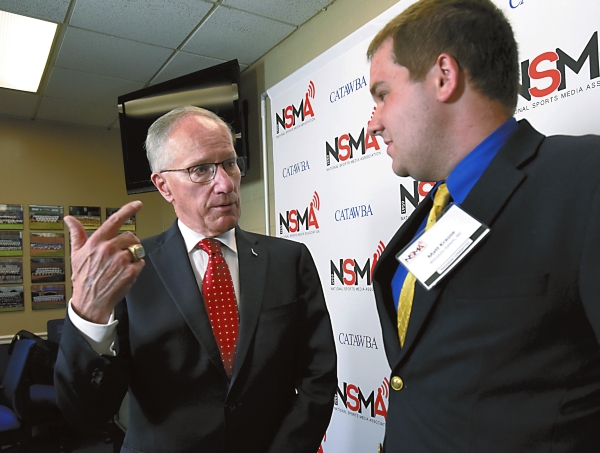 SALISBURY — Mike “Doc” Emrick is a on roll.

Not bad for the farm boy from just outside Ft. Wayne, Ind., who at first, wanted to cover baseball.

“That was before I saw a hockey game in person,” said Emrick. “I fell in love with the sport.”

Emrick, who was here Monday night to receive his award at the National Sports Media Association’s annual banquet at Catawba College’s Goodman Gym, just concluded his 43rd year covering professional hockey, including 36 in the NHL.

Emrick has called over 3,200 hockey games in his career, with the most recent one being last week’s Stanley Cup clinching win for Pittsburgh’s Penguins over San Jose.

“I’ve been able to cobble together not a bad career,” said the modest Emrick. “And it’s because I really love the sport and wanted to do it, but with a lot of rejection until I got my first job.”

Emrick said that he waited 12 years for his first job in hockey, but finally landed it with the IHL’s Port Huron Flags in 1973.

Emrick has worked on 27 consecutive Stanley Cup playoffs, including 16 finals.

Emrick is a native of LaFontaine, Ind. He now resides in St. Clair, Mich., with his wife, Joyce. The have two dogs and seven horses.

Emrick is called “Doc” for a good reason. He earned a Ph.D. in radio-television-film from Bowling Green State University in 1976.

“I can’t kid myself that  I’m as good in the seventh game as I am in the first one,” said Emrick. “There’s travel to each game and you have to go to the practices, too. Doing a game without going to the practices is like taking an exam without studying.

“But by in large, it’s just a fun job,” continued Emrick. “You get a good seat, they let you in free and twice a month, they send you something in the mail and you get to work with great athletes.”

He has also been on the mic during two Summer Olympics, as play-by-play for water polo.

In December 2011, Emrick was the first ever broadcaster to be inducted into the United States Hockey Hall of Fame.

He also served for over 20 seasons as the TV voice for the New Jersey Devils.