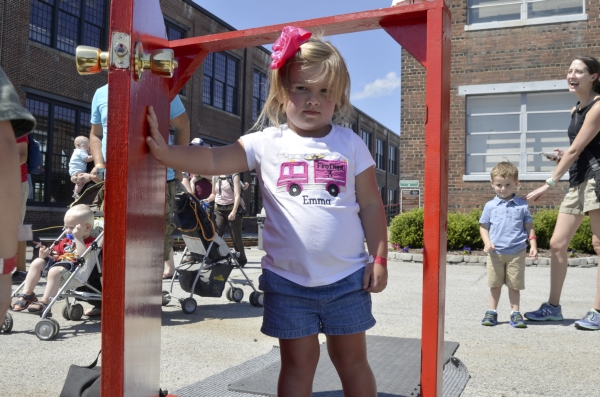 Emma Sifford, 3, opens the door to a "fire obstacle course" on display from the Thomasville Fire Department. It was designed to teach children and remind some parents about testing a door during a possible fire. The display was part of the second annual Fire Truck Show at the N.C. Transportation Museum. Shavonne Walker/Salisbury Post SPENCER — It’s an understatement to say Emma Sifford loves fire trucks. The 3-year-old Lexington resident loves them so much she wore a pink one on her T-shirt, her parents had a fire truck themed birthday party this year but most of all she would climb and ring the bell at nearly all of the fire trucks during Saturday’s second annual Firetruck Show.

The show was held at the N.C. Transportation Museum and is said to be the second largest show of its kind last year. This year museum staff say there were 50 pieces of equipment, which included some vintage trucks and equipment, a helicopter and other vehicles from the N.C. Forestry Services and Rowan County Rescue Squad.

Emma’s parents, Lindsay and Timothy Sifford, were glad to stop and let Emma pose with a cut out of a fireman’s turn out gear before continuing on their way to many more trucks.

Timothy Gray is a volunteer firefighter and his son, Braylen, 5, is used to seeing his dad suited up in his turn out gear. The child even had his own turnout gear complete with the boots, jacket, pants and hat. Gray and his wife, Bethany, received a flyer telling them about the event.

“It’s all about him today,” Timothy said of letting his son explore the trucks and equipment.

Bryan Abernathy and his son, Caden, 7, brought his friend’s fire truck that is used as a ministry tool. The truck, a Ford Howe, travels and is an opportunity to talk about Christianity, Bryan said.

“You’re always looking for an opportunity to reach people to Christ,” he said.

By Amanda Raymond amanda.raymond@salisburypost.com SPENCER — The Spencer Board of Aldermen approved a $2.76 million fiscal year 2016-2017 budget at... read more