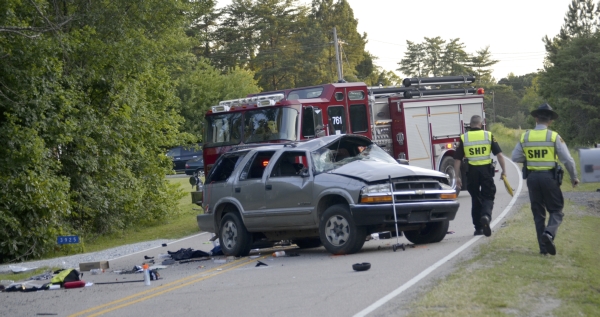 An 18-year-old died Saturday after he lost control, overcorrected his sport utility vehicle on Goodman Lake Road. The vehicle overturned twice ejecting him and a passenger, 15. The passenger was seen at the scene and appeared to have minor injuries. Shavonne Walker/Salisbury Post

SALISBURY — A Rowan County teen driver died Saturday after he was thrown from a sport utility vehicle in a crash on Goodman Lake Road, off Bringle Ferry Road. A passenger was also thrown from the vehicle, but he survived.

Officials could not release the names of the teens until notification had been made to their families. Trooper D.R. Morgan said neither boy was wearing a seat belt.

Morgan said as the driver  came around the curve headed toward Bringle Ferry Road, he ran off the right side of the road. He over corrected, came back onto the road and went left of center. The vehicle overturned two times, ejecting both teens.

The 15-year-old passenger was seen at the scene and he appeared to have minor injuries.

Cauble said it was a joint effort by everyone at the scene to try to resuscitate the teen.

The crash occurred at 6:56 p.m. a short distance from Heavens Trail and Goodman Lake Road intersection.

Morgan said he didn’t believe the two boys were related, but were friends.