All-Rowan County baseball: Ike Freeman is Player of the Year 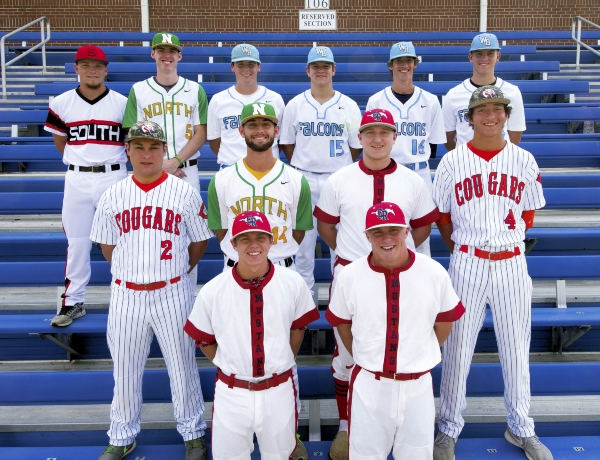 SALISBURY — North Carolina signee Ike Freeman’s goal entering his senior season at East Rowan was to bat .400.
“I wanted to set the bar high,” Freeman said.
Considering that Freeman hit .372 during an all-county junior season, .400 was a reasonable target for the slugging shortstop, but he underestimated himself. Freeman batted a county-best .518. He hit safely in 25 of the Mustangs’ 27 games and in 15 straight to finish the season. His last 0-fer came on March 26, and he closed his prep career with a scary hitting binge that included 20 hits in his final 31 at-bats.
East tackled a tough non-conference schedule, including 4A state champ North Davidson, but Freeman’s numbers were staggering. His 44 hits and .594 on-base percentage also were county-leading figures. He tied for first in the county in homers (5), tied for second in runs scored (25) and was third in RBIs (25) and doubles (10).
No one at East had batted .500 since Adam Horton in 1999.
Deciding on the Mark Norris Memorial Award winner that goes to the Salisbury Post’s Rowan County Player of the Year is usually a difficult process. It was virtually a dead heat last season between Carson’s Heath Mitchem and Salisbury’s Riley Myers, but Freeman made it much easier this time.
Since 1978, the Norris family has provided the award in memory of Mark Norris, a former Salisbury High player who was killed in an accident during his freshman year of college. Eric Norris, Mark’s brother, makes a prediction each year as to who the recipient will be, but there wasn’t much suspense this time.
“Ike Freeman, right?” Norris said, when he phoned in to find out whose name to have engraved on the trophy.
Besides what he did at the plate, Freeman, the South Piedmont Conference Player of the Year, was spectacular at shortstop, especially late in the season. There were two Jeter-esque, leap-and-throw plays, with his momentum carrying him toward the third-base line, that had to be seen to be believed.
“I got sick for a little while early in the season and I struggled in the field for two weeks,” Freeman said. “But then I got really comfortable.”
East coach Brian Hightower believes the biggest strides Freeman made as a senior weren’t with his bat or glove. He was a leader — in the offseason and during the season — for an East team that won 18 games, a lot more than anyone anticipated.
“The biggest step for Ike was the leadership role he took on as a senior,” Hightower said. “He added being a great leader to all of those offensive numbers.”
Freeman’s goal since his baseball career started was to play for UNC. He said the South Charlotte Panthers showcase program helped him accomplish that dream. He played in front of a lot of scouts from a lot of schools, but as soon as UNC offered, he was ready to sign.
Whether he can be consistent enough on the routine plays to stay at shortstop as his career unfolds is something that only time can answer, but his bat should get him in the lineup somewhere for the Tar Heels.
Freeman comes from a wrestling family. His father, Russ, wrestled in college, as did his uncle, Wayne, who coached South Rowan’s wrestling program for many years.
But Russ Freeman knew early on that he had a ballplayer on his hands.
“I knew in Pee Wees,” Russ said with a laugh. “Ike was the shortstop, but even if the ball was hit to right field he was running out there to get it.”
The Post sports staff picks the all-county team. The coaches in the county are asked for nominations. It’s a 12-man first team, with two pitchers and two utility players who played multiple positions. All the first team all-county players also were all-conference players.

First team
1B — Bo Corriher, South, Sr. — Led the county in triples (4) and was the Raiders’ best offensive player.
2B — Austin Love, West, Jr. — UNC commit was second in the county in wins with eight, but he also helped the SPC champs offensively and defensively. His walk-off homer against Carson in the SPC tournament championship game was the swing of the season.
SS — Ike Freeman, East, Sr. — UNC signee finished his stellar career with 120 hits.
3B — Brandon Walton, West, Jr. — First-year varsity player was in the county’s top five in batting average (.432), homers (4) and RBIs (23).
OF — Michael Morrison, Carson, Sr. — Batted .412 and was second in the county in RBIs (26).
OF — Kacey Otto, West, Sr. — Tied for second in the county in runs scored (25) and drove in 22.
OF — Henderson Lentz, North, Jr. — Known more for basketball, but he batted .419 and made a half-dozen diving catches.
C — Jake Pritchard, North, Sr. — The Central Carolina Conference Player of the Year batted .425 and led the county with 29 runs scored.
P — Bryan Ketchie, West, Sr. — Catawba signee went 7-2 with a 2.21 ERA.
P — John Owen, East, Jr. — The Patrick Snider Memorial Award winner went 10-2 with a 1.14 ERA.
U — Owen White, Carson, Soph. — Six wins and 87 strikeouts on the mound. Five homers, 13 doubles and 23 RBIs at the plate.
U — Jordan Wise, East, Sr. — The county’s most improved player, Wise batted. 414 and was outstanding (1.09 ERA) when he pitched.

Second team
1B — Robbie Monroe, North, Sr. — Finished the season on a hitting tear to lead the county with 27 RBIs.
2B — Alex Yang, Salisbury, Sr. — Scored 23 runs for the Hornets.
SS — Peyton Penninger, South, Sr. — Scored 21 runs and anchored South’s defense.
3B — Jackson Justus, East, Sr. — Lenoir-Rhyne signee drove in 23 runs.
OF — Chandler Blackwelder, East, Jr. — Stole 13 bases and was outstanding defensively in center field.
OF — Brandon Mock, Carson, Sr. — Headed to Guilford, he had 32 hits and knocked in 19.
OF — Tyler Rary, South, Sr. — Led the Raiders with 23 runs scored.
C — Ryan Bearden, Carson, Sr. — Batted .333 with four homers and nine doubles.
P — Brandon White, North, Sr. — Bulldog lefty signed with Belmont Abbey and was the CCC Pitcher of the Year
P — Blake Johnson, South, Sr. — Won five games on the mound and hit with some power. Another Belmont Abbey signee.
U — Harrison Smith, Salisbury, Sr. — Batted .373 to lead the Hornets and won twice on the mound.
U — Will Steinman, Salisbury, Sr. — Led the county with 25 steals and won four games as a pitcher.