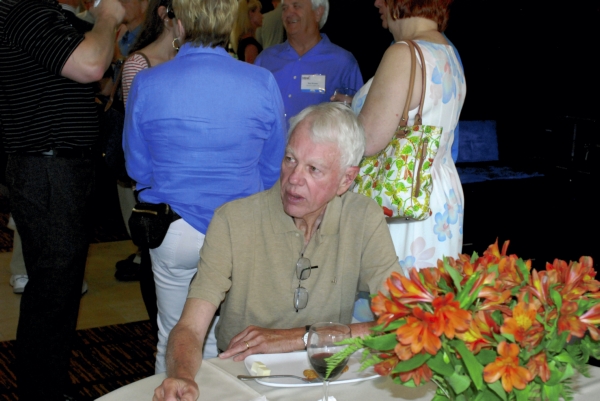 SALISBURY — The national spotlight has again settled on the Boston Globe.

“We accomplished something that we’re extremely proud of,” retired sports columnist Bob Ryan said Saturday night at Catawba’s Goodman Gymnasium. “And we did it as well as anybody ever did it. Did we do it better? I don’t know, but we were as good as anybody doing it. I’ll settle for that.”

Ryan accepted an engraved pocket watch, representing lifelong achievement, from NSMA executive director Dave Goren with instructions to ensure its safe delivery back to Boston. He was joined onstage by former Globe workmates Leigh Montville, Lesley Visser and Vince Doria — each an industry pioneer during the department’s 1980’s heyday — for a lively, one-hour stroll down memory lane. It amounted to a breezy set, filled with insightful anecdotes, you-are-there recollections and a sizable dose of comic relief.

“The hallmark of the Boston Globe sports department is that everybody was funny,” said Visser, a 2015 inductee into the NSMA Hall of Fame. “They were funny and they were quick. I remember when I was first offered a job at CBS, it was a hard decision. I thought, ‘Why would I want to leave the Globe? I’m having a blast here.'”

Montville served as the staff’s George Costanza — a best-of-breed contributor but also the butt of many a joke — during his 21-year reign at the Globe. “Joining the Globe was sort of like making the major leagues,” he drolled. “But I thought they would teach me more.”

With his long-gone thinning red hair and an auburn mustache draped over his lip, Montville was once mistaken for Dodgers’ third-basemen Ron Cey. “It was during one of the World Series against the Yankees,” he told the amused crowd. “And Cey had just hit like three home runs in a game. People followed me to the (media) bus and were pounding on the windows. When I got back to the hotel this Indonesian guy at the desk says to me in broken English, ‘Gouudd game tonight.'”

Ryan, who covered the Celtics for Boston’s sports-crazy fan base,  offered a tongue-in-cheek commentary. “I don’t know what Leigh Montville did, but he did it better than anybody,” he quipped. “He was part of a golden age.”

Doria, of course, was the maestro — leading the staff like he was conducting the Boston Pops. He took over as sports editor in the mid-1970s and transformed a ready-to-blossom staff into a group that arguably produced the nation’s premier sports section. Within a decade the Globe’s sports staff looked like the front row of the Ocsars — a murder’s row manned in part by Peter Gammons, Dan Shaugnessy, Will McDonough and Larry Whiteside.

“It was an unexpected joy,” Doria said. “A wonderful time in a wonderful place, with extraordinary writers. We’re talking about something that took place 30 years ago. As you get older you can look back and appreciate it more. And usually if you’re getting honored like this, it means you’re getting older.”

But perhaps it is Ryan who best represents the Globe’s prominence and pride, though he’s quick to credit former Globe editor Tom Winship with leading the crusade.

“He was a blue blood,” Ryan said. “He recognized the importance of sports in Boston and concurrently was a lover of writers. He let us be a writer’s paper, not an editor’s paper. And that made all the difference.”