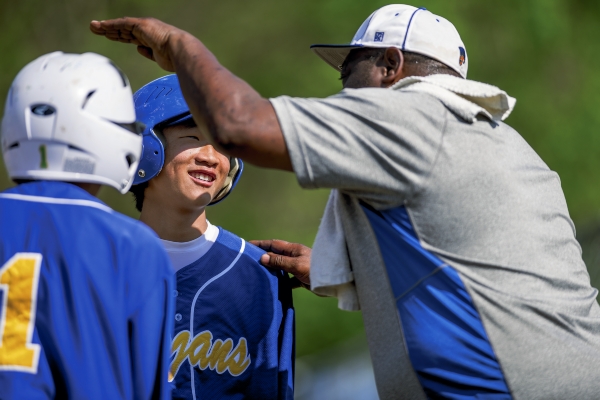 ALLISON LEE ISLEY/SALISBURY POST Aaron Yang grins as his coach pats him on the back for a job well done during Knox Middle School's home baseball game in Salisbury against Southeast Middle School on Wednesday, April 26, 2016. Yang was fitted with a prosthetic leg earlier this spring and was eager to join the baseball team. His teammates and coaches have embraced him and encouraged him each time he's at bat.

Aaron Yang eager to fit in

Aaron Yang stands behind the bleachers. His big sister, Ellen, is sitting high above him, talking to a friend. Like the girls have just done, he tries to climb up the four or five feet to the top seat.

Aaron refuses. Finally, he scrambles up, gets his sister’s attention, and smiles, clearly pleased with himself.

Pretty good for a kid with just one leg.

Nearby in the shade, Coach John Knox, the boys’ baseball coach, presides over a hot grill on a hot day. Knox, who’s been at the school for six years, is clearly in his element.

“I’m happy here and I wouldn’t trade it for nothing,” he says, grinning.

He was also happy to take Aaron on as a player this spring.

Aaron arrived in the United States just over a year ago, having been adopted in China by Steve and Lori Yang. He was born with a shortened right leg, and, until he came here, walked with a crutch. In December, the lower leg was removed, and in March, Aaron received a prosthetic leg from Shriners Hospital in Greenville. He’s been getting used to it since then, learning to walk unaided for the first time.

Shortly after his arrival last year, he traveled with Ellen and the rest of the family — brothers John and Alex, new graduates of Salisbury High; sister Ashley, and brother Luke, adopted in fall 2014 by the Yangs — on Ellen’s cross-country adventure that culminated in the Little League Softball World Series win for her team. Dad Steve was her coach, and is this season as well.

“We are a very sports-driven family,” Steve admits. “This sports season, Aaron is understanding a lot more about sports.”

He adds, “Aaron wants to fit in. I’m very proud of him for trying it.”

So is Coach Knox.

“Aaron is a great kid,” he says. “My kids woke up and played when he came on the team. I told him, ‘We’re gonna get it out of you.’ He hadn’t had his leg that long. He didn’t know how to play. We made him feel like he was at home.”

Opposing teams and coaches were accommodating in allowing Aaron the opportunity to get on base.

“They told me, ‘We’ll do this, we don’t have no problem,’” Knox recalls. “It makes you feel good that there are people out there like that. Everybody loved to see Aaron when he got on base. His face just lit up.

“He’s been through so much, so now he’s one of the boys. You can’t keep a good man down!”

Steve and Lori were in the process of adopting Luke, who is hearing impaired, when Lori learned of another special-needs child who was available.

With Aaron, however, the clock was ticking, because if he wasn’t adopted by June 1, 2015 — the date of his 14th birthday — he’d be turned away from the orphanage.

Because the orphanage didn’t know how old Aaron was when he was abandoned, they assigned him a birth date of June 1, the day they received him in 2010.

On June 1, 2016, Aaron’s family took him on a surprise trip to the Speedpark at Concord Mills, then to Chick-Fil-A for supper, where they presented him with a set of golf clubs.

He wants to take up that sport as well.

“He’s just learning to hit the ball and hit it straight,” Steve says. “He wants to fit in, and he knows he can be involved and be part of something. He’s come a long way after one year.”

He recently got a new suspension system for his leg, one that’s less bulky and not as hot. Aaron says the apparatus still feels a little tight, but is OK. He’ll get frequent tweaks and adjustments since he’s growing so quickly. He’ll get a new leg in another year.

He and his mom thought the initial process was going to be easier than it was.

Yet the ability to play sports was the overriding reason Aaron chose to have his leg amputated.

“He wants to be able to run,” Lori says. “He loved being on the baseball team. Everybody was so nice to him and so supportive. He didn’t know how to play, but he went to all the practices. He had to walk several blocks to the field, but he didn’t want me to drop him off.

“I still feel like we’re on a trial-and-error period with his leg, but he’s only gonna get better as far as his options,” she adds.

When you adopt an older child, Lori admits, there are challenges.

“It’s not that he doesn’t have the ability to learn,” she says. “He just hasn’t been exposed. His spoken English is getting better, and his comprehension is good. His reading and writing is coming along very slowly. He’ll go on to eighth grade because of his age, but it’s a definite struggle.”

She adds, “He doesn’t have the confidence that he can do something, so he gives up. There’s no giving up in the Yang family.”

KANNAPOLIS – Nine months ago, the Kannapolis City Council bought 50 acres of downtown property and buildings. Since then, staff... read more