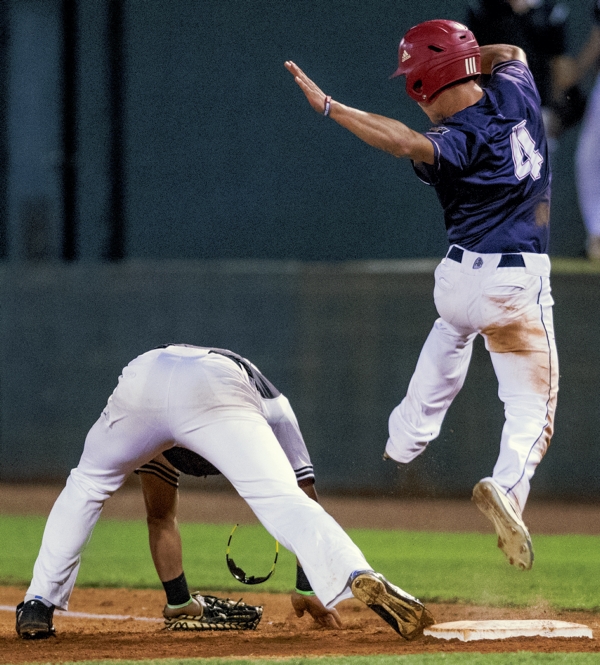 SALISBURY — There were lots of things for Rowan County American Legion coach Jim Gantt to circle in red Friday night at Newman Park.

Three straight walks by a relief pitcher. Failing to cover second base on a sacrifice fly. A pickoff throw to first that hit a baserunner. It added up to a frustrating, 9-8 to loss to visiting Steubenville (Ohio).

“Those things will get you beat,” Gantt said after Rowan’s well-meaning-but-clunky performance. “I don’t think we played good enough to win. They had some key hits with men on base, after some walks. It’s a tough game to lose, but they played a little better than we did.”

Yet it wasn’t enough to ward off Post 33, which earned a split in its four-game road trip and headed home 10-5 overall.

“We knew these four games would probably be the best teams we play all year,” winning coach Anthony Pierro said. “But we’re a team in every sense and we came to the park ready today.”

It didn’t take Steubenville long to mark its territory. The guests had three hits and a 1-0 lead by the time Rowan starter Brandon White had thrown six pitches.

“We’re not used to giving up three or four hits in the first inning,” said Poteat. “It was a wake-up call.”

Rowan was two runs down when Walton crunched a run-scoring double to center field in the second against Zorne, a sturdy left-hander who threw 145 pitches in 7 2/3 innings. Pritchard followed by drilling an 0-2 pitch over the left-field wall for his first home run of the season.

“It gave us momentum,” Gantt said. “But their pitcher kept us off-stride. He pitched back-and-forth. He threw his fastball up in the zone and his change-up at the bottom. And he threw it 3-2. A lot of guys don’t throw 3-2 change-ups and that gave us fits.”

Zorne (1-1) was more of a workhorse than a show pony. He walked six, allowed six earned runs, threw a couple of wild pitches and committed a second-inning error on a low pickoff throw to second base.

“Yeah, but he throws strikes,” Pierro said. “That’s his game. He’s a well-conditioned kid. I knew he could handle them. He’s the only pitcher I have who could last that long.”

Zorne looked like he was finished after Rowan went ahead 7-4 in the last of the fifth. Walton struck the key blow — a two-out, two-run triple into the right-field corned that snapped a 4-4 tie. He scored moments later when Pritchard reached on an error.

“That was another change-up,” Walton said. “I got up and around it. It should have been in the gap, but you take whatever you can get.”

Lefty Joe Harrison relieved White in the Steubenville sixth and, after inducing a routine fly out, issued three consecutive walks. Gantt replaced him with Sawyer Strickland, who surrendered a screeching, bases-clearing triple to right by Dimitri Collaros that tied the score. Post 33 added another run when Ryan Bernard steered a base hit into right and went up 9-7 on Johnny Agresta’s two-out RBI-single in the seventh inning.

Rowan inched a run closer in the last of the seventh on pinch-hitter Juan Garcia’s sac fly, but stranded two runners in scoring position in both the seventh and eighth innings.

“Everybody had their night,” Poteat concluded. “We still got a lot out of this. We need to always be prepared, no matter who we’re playing or how important the game is.”