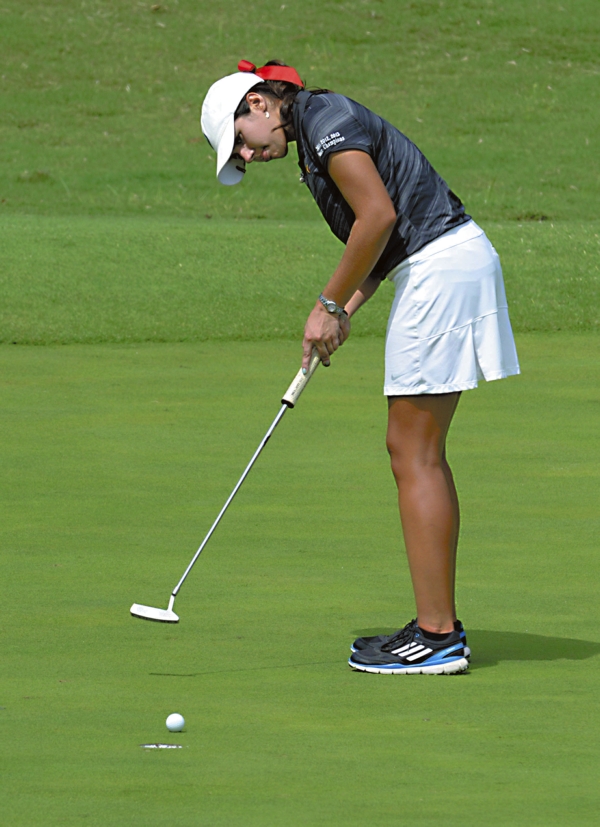 SALISBURY – Salisbury golfer Grace Yatawara was attempting to win her second N.C. Junior Girls title in three years but a large early deficit in Friday morning’s match-play semifinal was just too much to overcome.

Yatawara found herself trailing the defending champion, Grace Massengill of Hickory, by five after after 11 holes. A three-hole rally gave Yatawara hope with two holes to play but Massengill sank a short par putt on No. 17 to close out the match, 3 and 1, advancing to Friday afternoon’s championship.

The 20th annual Junior Girls Championship, sponsored by the Carolinas Golf Association, covered four intense days of golf at the Country Club of Salisbury, including two days of stroke play, followed by two days of match-play for the top 32 golfers. A total of 49 of the best junior girls (ages 12-18) from across North Carolina took part in the annual event.

Ultimately, the top prize went to Emily Hawkins, a home-schooled sophomore from Lexington, who rolled past Massengill, 4 and 3, in the Friday afternoon finale. Massengill, who is headed to Wofford on a golf scholarship next fall, fell behind by four holes after nine and was never able to recover. Hawkins birdied 13 then halved 14 and 15 to close out the championship match.

After her semifinal win over Yatawara Friday morning, Massengill was glad to have a shot at defending her 2015 championship. “I really want it,” she said. “It would be great to win two in a row.”

But Hawkins, ranked 12th in the state by the Tar Heel Junior Golf Association, had other ideas as she grabbed her first CGA junior title. She advanced Friday morning out the semifinals with a 2 and 1 win over Riley Smyth of Cary, thanks to a birdie on the 17th hole.

In her semifinal match with Massengill, Yatawara missed a sequence of makeable putts on the front side, dropping four of the last five holes. A short par putt on No. 9 circled the hole and lipped out to put her four down, then Massengill birdied the par-4 11th to go 5-up.

“I guess falling behind by four after nine was the turning point,” Yatawara said. “That doesn’t give you a whole lot of time to make a comeback. I don’t feel like my putting was terrible. I was just mis-reading it a little.”

Despite the big deficit, Yatawara made an Arnold Palmer-like charge on the back side to add some drama to the semifinal match. After falling 5 down after 11 holes, she drained a 20-foot birdie on No. 12 to win, then a similar long birdie putt on No. 13 to claim the hole. On the par-three 14th, Massengill found the water hazard while Yatawara sank her par putt. Suddenly, the Massengill lead was down to 2-up with four to play.

“Yeah, I got a little nervous there,” Massengill said. “That was a big three-hole stretch for her but I still felt I was in control.”

Pars by the golfers on both 15 and 16 left the match at 2-up for Massengill, heading to the par-3 17th. Yatawara was 20 feet off the front of the green and chipped to within six feet. Massengill was in the bunker on the front right and blasted out to within 3 feet of the cup. Yatawara missed her putt before Massengill calmly sank her par to win the match.

“Overall, I feel like I played well,” said Yatawara, despite the loss. “I feel like I gained some confidence in this tournament because I haven’t been playing that well lately. It was nice to feel like my game is back on track.”

A two-time state 2A individual champion at Salisbury High, Yatawara will enroll at East Carolina University this fall on a golf scholarship. Her next competitive outing comes in early July in the prestigious North-South Tournament in Pinehurst.