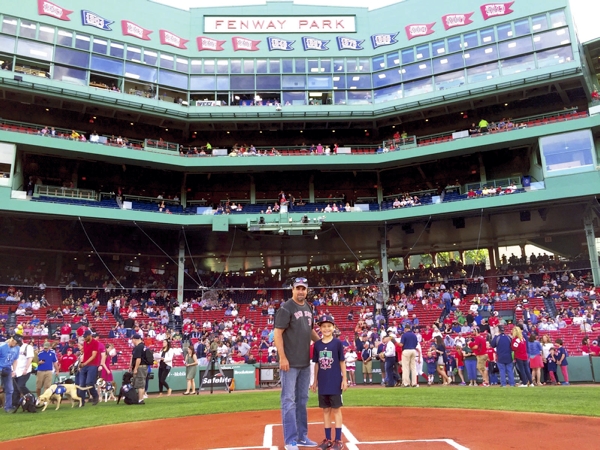 submitted photo Eight-year-old Brady McIntyre, a local Boston Red Sox fan, was selected to “paint the plate” before Tuesday’s game at Fenway Park. Brady was at the game with his parents, Dwayne, left, and his mother, Rainey.

Tuesday marked 8-year-old ballplayer Brady McIntyre’s second trip to Boston’s Fenway Park, but he didn’t remember the first one.
“I was pregnant with Brady the last time we were at Fenway, and we haven’t had a chance to get back,” said his mother Rainey McIntyre.
Rainey wasn’t a sports nut growing up, but then she married into a family of diehard Red Sox fans. Her husband, Dwayne, is known mostly as an excellent golfer, but he was a good baseball player at East Rowan High and for the Rowan County American Legion program.
Dwayne’s devotion to the Rex Sox is unlimited.
Brady, who just finished second grade at Faith Elementary School, has been raised as a Red Sox fan. His favorite player always has been slugger David “Big Papi” Ortiz. Brady’s dream has been to see Ortiz swing a bat in person, and his parents promised him they would do their best to make it happen.
The 40-year-old Ortiz’s announcement in Novemember that this would be his final season made it a now-or-never summer for the McIntyres.
“Well, it was going to have be this year if Brady was going to see Big Papi before he retired,” Rainey said. “It was kind of a costly trip for the family, but we made it a 48-hour deal. We flew out on Monday morning and flew back on Wednesday morning.”
Tuesday night’s game against the Baltimore Orioles gave the McIntyres more than they’d bargained for, but things got off to a slow start.
The McIntyre’s seats were pretty good, halfway up the first-base line and in the lower level of the ancient ballpark, but they were only one row from the back.
Brady had brought his glove, eager to snag a foul ball, but he’d calculated long before the game started that he wasn’t in an optimal location for foul-ball catching.
“He announced that the seats were horrible because he couldn’t get a foul ball,” Rainey said. “Then I asked him if he wanted to go with me to get something to eat, but he didn’t want to go.”
Rainey headed for the concession stand alone, reached her destination and put in a call to her husband to read off the items displayed on the menu.
Right after she ended that call, a Red Sox employee approached the McIntyre males and asked if Brady would like to go down on the field to perform the ceremonial pre-game painting of home plate with white spray paint.
Dwayne tried to contact his wife once, twice, three times.
“I guess he was calling frantically,” Rainey said. “I was still in the concession-stand line, talking to one of the locals who thought I must be from Texas because of my accent. I was explaining to her I was from North Carolina.”
With his wife still nowhere in sight, Dwayne gathered up the bundles of sweatshirts and souvenirs the McIntyres had brought to the ballpark or purchased there, and made his way down to the historic field with Brady.
The Red Sox, including Ortiz, watched from the dugout, as Brady smoothly handled his unexpected spray-painting duties, and then Dwayne and Brady, after a round of picture-taking and videos, were ushered back to their seats.
“I missed the whole thing,” Rainey said. “I was crazy upset.”
It was enough to make a grown woman cry, but then they replayed the plate-painting scenario on the Jumbotron, as the crowd cheered, and Rainey got to see the lit-up faces of her husband and son. Plus, Dwayne did a fine job of recording every precious second for posterity.
“I know it meant a lot to Brady to be on the field at Fenway Park, but Dwayne was even more excited,” Rainey said.
The Red Sox dropped the game, 3-2, but Brady did get to see Ortiz whack a double. He also got to see three homers leave the park and he witnessed several two-baggers rattling high off the Green Monster.
It’s a night he’s not likely to ever forget.
Brady is more than a spectator and spray-painter. He plays for the East Rowan 8-under all-star team that beat Sherrills Ford, 30-1, in its first game in the playoffs.
East Rowan plays Round 2 this morning at 10 a.m. in Startown, near Newton.
“The team has some studs, a lot of boys who play travel ball,” Rainey said. “We’ve got high hopes.”