‘Ready or not’: Future kindergarteners warm up to school 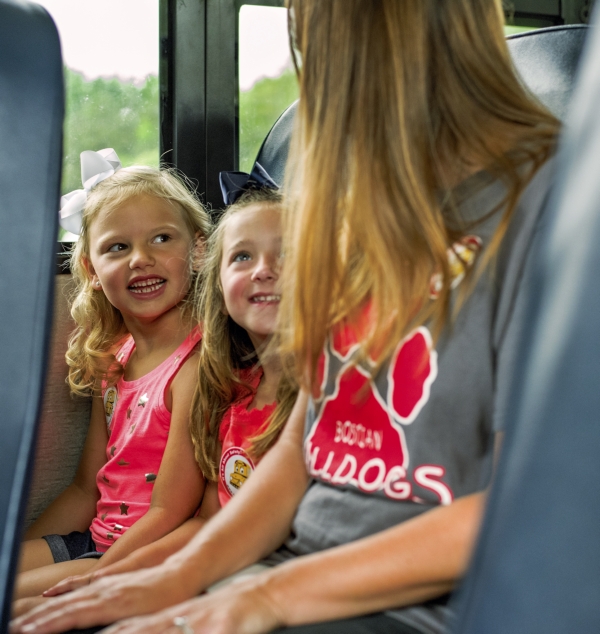 CHINA GROVE — Janice Query begins singing “The Wheels on the Bus” as she turns a white activity bus out of Bostian Elementary onto Old Beatty Ford Road. It’s not long before the rising kindergarteners in the seats behind her pick up the tune. It’s the first time many of them have been on a school bus.

The trip is part of Bostian Elementary’s “K-Camp” – a three-day experience designed to help nervous pre-schoolers acclimate into confident kindergarteners. Kindergarten teacher Allison Billings said the camp should help the group of more than 40 children get used to the school, teachers and some of the activities they’ll do in class.

“I think it’s going to help them at the beginning of the year,” Billings said.

Bostian is one of the schools in Rowan County that doesn’t have a pre-kindergarten program, and for many children the experience is entirely new. The first week of school has staggered days for kindergarteners to help ease them into the class routine, but Billings said it’s still touch and go.

“During those days we see a lot of tears,” she said.

But K-Camp started Tuesday, and so far there haven’t been any waterworks. Over the course of the camp, they’ll participate in centers, story time and arts and crafts.

Wednesday, they learned about bus safety when Query, area route coordinator for the east and southeast parts of the county, let them take a ride on one of the system’s activity buses. With the help of “Buster the Baby Bus,” a blinking, moving bus replica, kids learned about the bus’s stop arm and safe places to stand while approaching the bus.

Some new children, showing up on the second day, clung to parents as they entered the school’s media center. But Bostian’s kindergarten teachers took them in hand, smiling and asking if they’d like to draw a picture of themselves.

The task was part of an assessment to see how prepared the children were for school – over the course of the camp, they’ll also be tested for writing, knowledge of letters and letter sounds. Not everyone will be up to speed by the time August rolls around.

In Kindergarten, students will learn the basics of literacy, math and writing – which many of them are unprepared for. Billings said she’s had students who didn’t know how to hold or open a book before. But no matter where they are, when school starts, it’s the teachers’ job to get them up to speed.

“Kindergarten is definitely an interesting year,” she said, “You’ve got both ends of the spectrum … but it’s interesting to see where they end up at the end of the year.”