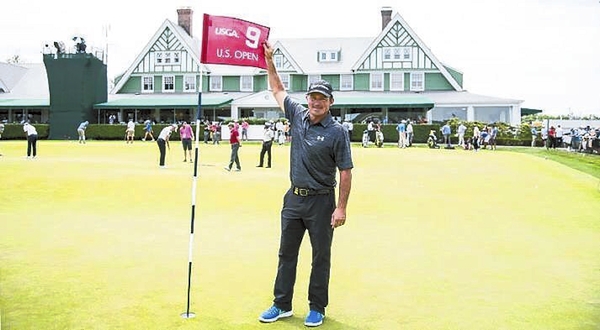 Keyur Khamar/PGA TOUR ... Frank Adams III, a Salisbury resident, during Wednesday’s practice round. Adams’ first round at the U.S. Open at Oakmont was suspended by bad weather.

Adams III fighting for his career at the U.S. Open

Weather played havoc with Thursday’s first round of the U.S. Open and Salisbury’s Frank Adams III did not get started. Play was suspended for good around 4 p.m.

OAKMONT, Pa. — Frank Adams III’s eyes well up and his voice cracks during an interview on Oakmont’s driving range. He’s doesn’t want to get emotional while discussing this week’s U.S. Open, the biggest tournament of his life, but it’s inevitable once he starts talking about the support that got him here and what may lie ahead.

Adams, 37, is playing his first U.S. Open. He turned pro in 2003, but has played in just one PGA TOUR and three Web.com Tour events. The remainder of his career has been spent on the wrong side of professional golf’s fine line.

Adams and his wife Allison have two young boys at home and he knows it may be time to start considering another line of work. There isn’t as much money in golf’s minor leagues as there used to be. Two months ago, he took the test to get his teacher’s certification.

“I might be at the end of it,” Adams said. “It’s just gotten a lot tougher to make ends meet now. You either get a card or get a job, pretty much.”

He may be anonymous to almost everyone interested in the proceedings at Oakmont, but he represents what makes the U.S. Open unique. No other major opens its door so widely.

Jordan Spieth, Jason Day and Rory McIlroy are at Oakmont this week trying to add another line to their gilded resumes. Adams, among the half of the field who earned its way here via sectional qualifying, is trying to capitalize on the championship’s inclusivity. There’s a reason Tin Cup’s climactic scenes took place at the U.S. Open.

“A good week out here can change your whole world. It’s a tough task to try to do it at a U.S. Open, but I can’t think of a better place to do it,” said Adams, who lacks status on any tour. Qualifying for the U.S. Open means subjecting yourself to golf’s toughest test, but it doesn’t come without potential rewards. Just making the cut means a five-figure paycheck and exemption into the second stage of the Web.com Tour’s Qualifying Tournament.

“The biggest thing I’ve learned is that when you give yourself an opportunity, you have to take advantage of it. You have to,” Adams said. “Maybe if I had given myself a few more chances, I would have gotten over the hump by now.”

A large contingent of family and friends have gathered here this week to watch him. They’ve supported him, financially and emotionally, during his pro career and so he wants to share its culmination with them.

Adams, who tees off at 2:42 p.m., will be the last man to tee off on Oakmont’s first hole Thursday. He estimates it’s the latest tee time he’s ever had, but it’s also worth the wait.

Adams won eight times on the now-defunct eGolf Professional Tour, which used to be one step below the Web.com circuit. He’s beaten players who have occupied the PGA TOUR’s winner’s circle this season, including former Little League foe William McGirt.

“It’s very tough to make money playing mini-tour golf, and he’s one of the very few who’s been able to do it over the past 12 years,” said Adams’ younger brother, Russ, who will caddie for him this week. Russ played five seasons for the Toronto Blue Jays and now competes alongside Frank on the mini-tours.

“’Tough’ is probably the best description I can give him,” Russ said. “He’s always been a fighter. … That’s what this week is going to be all about. It’s going to be a grind. He’s been pretty good at that during his career.”

Kevin Miller, Frank’s East Carolina teammate and roommate, remembers Frank hitting balls on the athletic fields of Elmhurst Elementary School, which were right behind their dorm. Even on the snowy days, he was out there shagging his own balls.

It’s getting harder and harder to stay in the black on golf’s minor leagues, no matter how many red numbers you’re shooting, though. Frank Adams arrived at Oakmont as the leading money winner on a small circuit called the GPro Tour, but he admit, “It’s not quite reaching.”

He has two sons, a 2-year-old and 6-month-old. His wife Allison is a middle-school physical education teacher.

“I’ve had a lot of help from family and friends, but it’s another ballgame when you have your second boy and your wife’s a teacher,” Frank said.

Frank and Russ Adams arrived at Oakmont on Saturday to adequately prepare for this opportunity. They played their first practice round the next day. Adams and McGirt, who was exempt into the U.S. Open by being in the top 60 of the Official World Golf Ranking, played practice rounds Monday and Tuesday. McGirt made match play in the 2003 U.S. Amateur at Oakmont and was happy to show his friend around the tough track.

“I knew once I got about halfway down the second fairway on Sunday that we had jumped in the deep end,” Frank Adams said.

Adams has had enough glimpses of success – Miller calls them “teases” —  to keep him going this long. There were fruitful years where he was earning approximately $80,000 on the course. He made his PGA TOUR debut in 2012, when he Monday qualified for the Wells Fargo Championship, and made it to Q-School Finals for the first time in 2013.

But there have also been the missed opportunities. The glorious side of professional golf is on full display, especially in the age of social media, but there’s a reason McGirt described his peers as “nuts” in his press conference after winning the Memorial.

“Most of the time we’re playing in the middle of nowehere and eating in little country restaurants. We’re there because they love it,” Frank Adams said. “Week-in and week-out, you get to know each other pretty well. You get to see all sides of someone, the good and the bad.”

Playing on the mini-tours doesn’t lack its trying times. He missed qualifying for this year’s Wells Fargo by a shot. He would have earned good Web.com Tour status if he’d played the final four holes of one Q-School in even par, Miller said. Two double-bogeys, caused by adrenaline-fueled shots that flew too far, sent him tumbling down the leaderboard, though. He’s been to Q-School twice, but he left both times with paltry status.

“He’s played really well for a lot of years on the mini-tours,” McGirt said. “I told him, ‘This could be your chance. Even if you finish 60th, it could get you a start down the road. There’s no doubt he has plenty of game. I’d love to see him play really well and see him springboard it into something bigger.”

The article was reprinted with permission from PGATour.com.