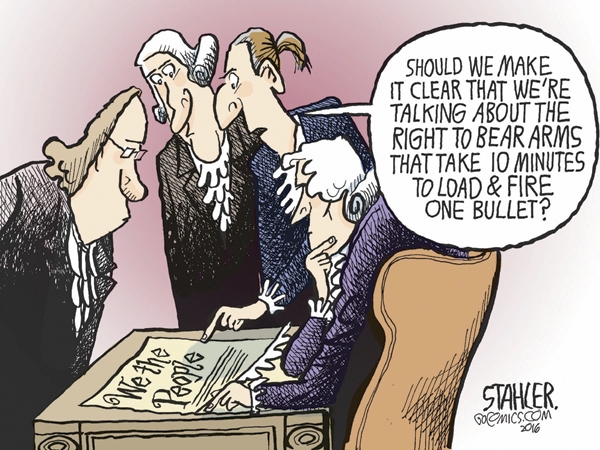 Last week the 9th U.S. Court of Appeals in San Francisco ruled that there’s no constitutional right to carry a concealed weapon. The court upheld a provision in California’s gun law that requires applicants to present a good cause for wanting a concealed-carry permit.

Sensible gun laws are still possible. The politics are difficult, but the fight must not be abandoned. What happened in Orlando Sunday morning _ and in so many places before Orlando _ must fuel a righteous outrage. Politicians who refuse to embrace the logic after this atrocity don’t deserve to be in office.

The 9th Circuit is the most liberal of the 11 U.S. judicial circuits. Its rulings apply only to nine western states, of which only California and Hawaii have “good cause” provisions in their concealed carry laws.

Still, the case of Peruta v. San Diego could go to the U.S. Supreme Court on appeal, which makes the question of who appoints Justice Antonin Scalia’s successor even more important. In 2008, Scalia wrote the majority opinion in D.C. v. Heller, which sets out the current interpretation of the Second Amendment.

Not only do individuals have the right to own guns, Scalia wrote, they can own weapons of the sort “in common use,” just as people did when the Constitution was written. However, he was vague on “dangerous and unusual weapons.” Not even Scalia was comfortable with a constitutional right to military-style assault rifles.

In 2013, in an interview on “The Daily Show,” Gen. Stanley A. McChrystal, former commander of NATO forces in Afghanistan, explained: “If you’ve been on the battlefield you’ve probably carried an M-4 Carbine. … It does terrible damage. It’s supposed to. I don’t want them on our streets. I don’t want them in our schools. I think we need to have a very serious look at why we would even consider having guns like that out there.”

An M-4 is a shorter M-16, the military version of the AR-15. Omar Mateen is believed to have used an AR-15 to kill most of the 49 victims at the Pulse nightclub. AR-15s, made by many manufacturers in multiple calibers, were part of the arsenals used in previous mass shootings in San Bernadino and Santa Monica, Calif.; Roseburg, Ore.; Newtown, Conn.; and Aurora, Colo. And more.

A bill in Congress, HR 4269, would ban the sale and import of AR-15s and similar weapons, as well as handguns that can fire more than 10 rounds. It has been buried in the House Judiciary Committee for more than 18 months.

It doesn’t have to stay buried, but outraged Americans are going to have to act on that outrage. Such a ban wouldn’t solve the problem, but it would help. And America needs help with its gun addiction.

Francis Koster: Why are some members of Congress handcuffing IRS law enforcement?