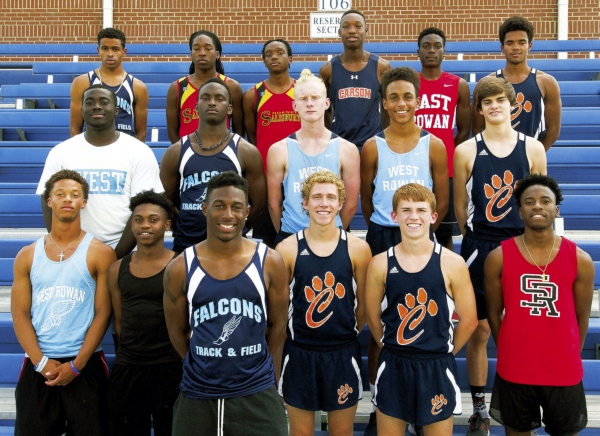 SALISBURY — West Rowan sprinter J.T. Sanders is the choice for athlete of the year for Rowan County boys track and field.
“It was a great season,” Sanders said. “I’m very proud of my teammates, my coaches — and myself. So much work went into it, especially in the offseason. We ran and we ran and we ran, even though some of us also were doing football.”
First place was a photo finish, with Carson distance dynamo Zachary Marchinko and Carson jumper Brenden Westbrook also in the picture.
The Post doesn’t announce an all-county team for indoor track, but Sanders’ brilliant senior season actually started in the indoor state championships with titles in the 300 and 500 meters and a 3A state record clocking of 1:05.84 in the 300. He also ran the anchor leg on the second-place 4×400 team and led the Falcons to a second-place team finish behind Weddington.
Sanders didn’t hit the brakes during the outdoor season. West ended East’s four-year grip on the Rowan County Championships, with Sanders leading the way. He swept the 100, 200 and 400 sprints for the second straight season and also sparked the Falcons’ victory in the 4×400 that capped the meet.
“One of my best races was winning the 400 in the county,” said Sanders, who roared from behind to catch and pass East Rowan’s Devaniel Dale and Carson’s Nick Cox. “I overcame a bad start, showed I could come back.”
In the South Piedmont Conference Championships, Sanders won the 100 and 400 and placed second in the 200.
In the 3A Midwest Regional, he won the 400, took third in the 200 and helped the Falcons to a first-place finish in the 4×400 and a third-place finish in the 4×200.
He ran one of the best races of his life to win the regional 400 in 49.08. He just missed the school record and is one of the 10 fastest in the event in county history.
“Getting down into the low 49s — that was probably my proudest moment of the season,” Sanders said.
Sanders didn’t win any events in the 3A Outdoor State Championships in Greensboro, but he placed in four events — third in the 400, seventh in the 200, third in the 4×400 and fourth in the 4×200.
Sanders led West to a sixth-place finish in the state meet.
“We all ran hard, gave it our best,” Sanders said.
Cox, one of the guys Sanders beat in the 400 in the county meet at East Rowan, summed up what Sanders is all about after that race.
“J.T. is beatable, but he’s the real deal,” Cox said. “He’s just a monster on the track, but he’s also a good guy to run against. He’s humble about his success.”
Sanders who is strong for his size at 5-foot-9, 165 pounds, hasn’t made a college announcement yet, although he expects to be competing at the next level this fall. He’s also a fine football player. His exceptional speed and determination helped make him an all-county cornerback. He ran down receivers as easily as he chased down opponents in the 400.
“I plan to keep improving and to keep working hard for more success,” said Sanders, who was named West’s Senior Athlete of the Year.
While Sanders was an obvious sprints MVP at the county championships, Marchinko, a senior who signed with Charlotte, ruled the distance events, and Westbrook, a junior who is proficient in all three jumps, was king of the field events.
Marchinko won the 1600 in the SPC Championships, placed in three events in the 3A Midwest Regional and had a third and a fifth in the state as well as a sixth-place finish in a relay.
Marchinko was part of the Carson 4×800 relay unit, along with Dylan Koontz, Silas Wertz and Cox, that broke the county record with an 8:06.11 clocking in the 3A Midwest Regional. Marchinko set a new county standard in the 3200 (9:18.04) and ran one of the elite 1600 times (4:20.89) in Rowan history.
Westbrook produced a terrific performance in the state championships, taking second in the long jump, his specialty, with a personal-best 22 feet, 5 1/2 inches. Sanders’ teammate Juwan Houston was second in the state in the 110 hurdles and clocked one of the 10 fastest times in county history in his main event in the SPC Championships.
The All-Rowan County team includes the county champions in all the individual and relay events and also includes the highest scorers in the county meet who did not win an event. East Rowan’s Max Wall, for example, piled up 28 points in the county meet with three second places and a fourth, while South’s Donte Hill registered 16 points in the jumps. Also on the all-county team are individual state qualifiers such as East’s Dale and Salisbury’s Tyrone Johnson and D.J. Alexander.