Graduation 2016: ‘Find something greater than yourself to believe in’ 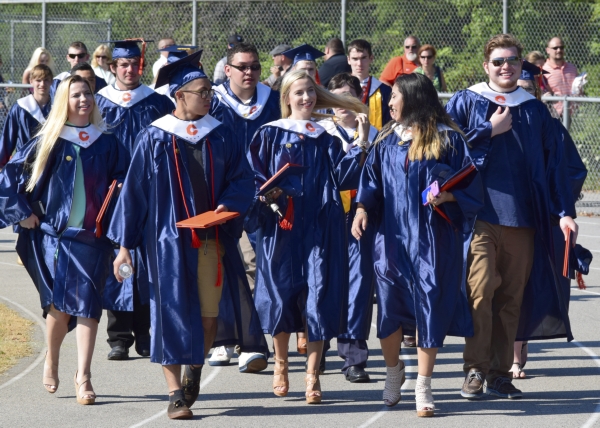 But Addie, president of the Student Government Association, had asked her mother to write a message to her senior class, and Addie read those words during commencement exercises.

In short, Amy Coleman told the graduates to remember that life is short, even though at 17 and 18 years of age, it doesn’t seem so. But even more important, Amy urged the graduates to “find something greater than yourself to believe in.”

Amy said that’s what she found during the last year of her own life and it gave her peace, joy and contentment. Her final days were filled with love, and she hoped the graduates’ lives ahead would be the same, full of peace and joy.

Amy Coleman was 51 when she died.

Addie Coleman read her mother’s letter with great composure. She told her classmates that four years earlier they had walked into high school as children, and they were leaving as adults.

“The truth is, we’ve grown up together,” Addie Coleman said, and surely in the future the graduates will be, in some cases, thousands of miles apart, but they’ll know that “once you were a part of my life and once I was a part of yours.”

Bleachers in the stadiums were crammed with relatives of the graduates. Everywhere, the commencement scenes were filled with sunglasses, sun hats, sunscreen, balloons, flowers, hand-held fans and water bottles.

As you might expect, the morning included much picture taking and homemade videos, and the decision to hold the commencement exercises early in the morning proved to be wise, as temperatures kept climbing throughout the day.

Roughly 1,400 seniors made the walk Saturday to accept their diplomas, including 252 students at West Rowan High, where the names ranged from Aquilar to Yow. It was the school’s 57th commencement exercise.

“The time has flown by so fast,” said Kayla Blackburn, who was salutatorian. “I am who I am today because of each of you. I could not be who I am today without you all.”

Blackburn said she has great hope for the future and looks forward to the person she will become.

“I only wish I could stay a little longer,” she said.

Saturday morning at Jesse C. Carson High School was more than just a graduation ceremony — it was a new page in the school’s history. The class of 2016 is the school’s tenth graduating class.

“Today is the celebration of a milestone,” Principal Angelo Dellisanti said.

Each graduating senior was awarded a lapel pin in honor of the occasion.

For students, it was the beginning of their future, and student speakers encouraged their class to follow their dreams, and prove any naysayers wrong.

But it was a bittersweet moment.

“We have all wandered down the path of high school together, but that path is coming to an end,” Landon Dwight Perkins, senior class president said.

As student speakers recalled fond memories of their high school years, and said goodbye to teachers, they also turned their faces towards the future. Student Body President Fallon Rae Ritchie quoted Walt Disney as she told her fellow graduates to pursue their dreams.

“Remember that this is just another beginning,” she said.

Cody Sharp was all smiles after the North Rowan High graduation ceremony as he posed for pictures with family. It was a day 13 years ago his family wasn’t even thinking about, but instead they were prepping the then 5-year-old for a bone marrow transplant.

Cody had been constantly sick and it was determined it was more than just a common cold. He was diagnosed with myelodysplasia, a rare pre-leukemia. He received a life-saving transplant from his older brother, Kyle.

“We took it day-by-day. We didn’t want to think beyond that day,” Traci Sharp, Cody’s mother, said.

The family was excited to attend Cody’s graduation ceremony, and all the relatives planned to gather later in the evening.

Essence Whitney wiped tears from her eyes as her son, Tae’Jone Williams, surrounded by family, hugged her.

Although it took a little pushing and prodding to get Williams to graduation, Whitney said she always believed in him.

“I always told him he would get here. I’m so very proud of my son,” she said.

Altogether, 160 students graduated during Saturday’s ceremony. However, on the hearts of many was fellow student Jalen Sanders, who reportedly was shot overnight in Charlotte but will recover, school officials told the audience.

A moment of silence was held in honor of Sanders, who is two-time Rowan County Boys Basketball Player of the Year. Carolinas Medical Center reported Saturday afternoon Sanders had been discharged from the emergency room.

At Salisbury High, family members routinely stood and applauded for their graduates.

One Salisbury High student, however, brought the entire stadium, including graduating seniors, to its feet. Raucous applause and cheers erupted for Robert Stephen Gilmore, who died in February after losing a nearly lifelong battle to cancer at the age of 19.
Salisbury High School recognized Gilmore’s family during the ceremony. His family received Gilmore’s cap, gown and diploma.
Graduating senior Darius Jackson also offered a few words about Gilmore. Jackson recalled his conversations with Gilmore about sports. Gilmore was a Panthers fan, and Jackson said Gilmore also enjoyed talking about the New York Jets and Washington Redskins.
Including Gilmore, a total of 184 students graduated from Salisbury High. Matthew Washko and Grace Steinman were the school’s dual valedictorians. Grace Yatawara was Salisbury High School’s salutatorian.

Dressed in black gowns, South Rowan High graduates on the field and family and friends in the stands fanned themselves with programs as the speakers congratulated them and encouraged them to chase down their dreams.

“A mind needs books as a sword needs a whetstone if it is to keep its edge,” Eller quoted.

Dillon Minehart, the other commencement speaker and co-valedictorian, compared life to a game of chess and said the graduates were like the pawn pieces.

“The pawn is also the only piece that has the potential to become something greater than itself,” he said.

Micah Helms said instead of saying goodbye, the graduates are saying hello to the future.

“It may be goodbye to each other in South Rowan for now, but it’s also hello to a new chapter of our life,” she said.

Ashley Lanning, teacher of the year for 2016-2017, presented the seniors while Lynn Moody, superintendent, and Dean Hunter, vice chairman of the Rowan-Salisbury Board of Education, awarded the diplomas to the 217 graduates.