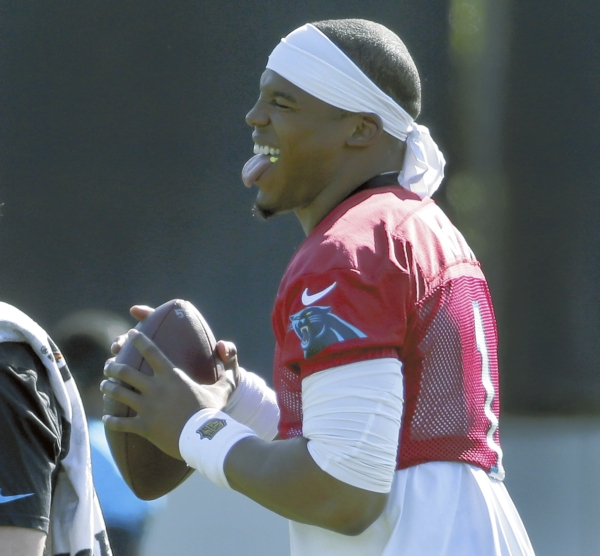 AP Photo/Chuck Burton ... Carolina Panthers quarterback Cam Newton jokes with teammates as he warms up during OTAs practice in Charlotte on Tuesday.

The NFL’s Most Valuable Player is moving on from the touchdown celebration he performed last season that became popular across the country.

“I have to put that aside,” Newton said Thursday during an interview on WFNZ-AM radio’s “The Mac Attack” show to promote his upcoming kickball tournament.

The quarterback starting “dabbing” after a touchdown run against the Titans last November on the advice of his brother. The celebration, although criticized by some, took off. Soon college and high school athletes were imitating Newton, who picked up the move from the Atlanta-based hip-hop group Migos, who sang “Look at my dab.”

The celebration stretched outside the lines with members of wedding parties photographed doing the dab. Kids in high school graduation photos did group dabs as well.

Newton took some criticism from fans of opposing teams for his touchdown celebrations as the season wore on. But he defended his actions last season saying that he was just having fun and the dances took him to “a happy place.”

He said at the time everybody is entitled to their own opinion, but he was just being who he is.

Newton, who also popularized the Superman celebration where he pretends to rip open his shirt, may have a new celebration next season.

“I have until September to find out,” he told WFNZ-AM.

During the radio interview Newton also discussed his post-Super Bowl press conference in which he answered questions in mostly short responses while wearing a hoodie draped over his head. After a three-minute interview, a pouty Newton walked off the podium.

He said he hasn’t seen footage of the news conference.

“I don’t need to see it for me to understand the grief or backlash I got from it,” Newton said told the radio station. “I’m admitting I learned from it, and that’s the first step.”

Newton was criticized for not handling the 24-10 loss to the Denver Broncos in a more professional manner.

Two days later he defended his actions, saying “Show me a good loser and I’ll show you a loser.”