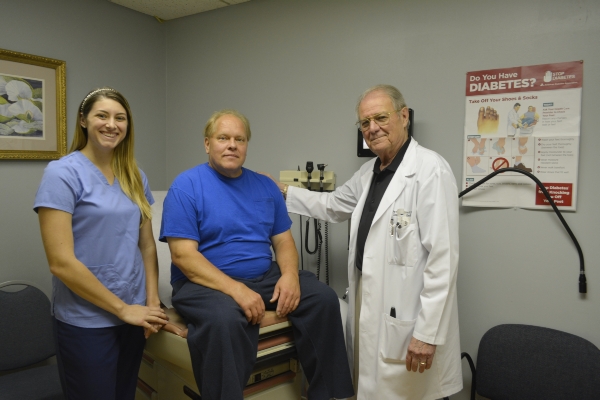 ‘Just a good guy,’ Smith a finalist for N.C. Doctor of Year

Of the 25,175 physicians practicing in North Carolina, a goodly number of them give back to their communities.

This spring, hundreds of doctors who do just that were nominated for the N.C. Doctor of the Year award by the North Carolina Medical Society. Dr. David Smith, medical director of the Community Care Clinic, was one of 10 finalists.

This is the second year for the award, given in conjunction with N.C. Doctors’ Day March 30. It carried a $5,000 prize that the winning physician could use to further a professional cause or help their community.

Smith helps the local community on a daily basis through his work with the clinic. Smith, 75, who’s been with the clinic for five years, likens his work to making house calls.

“I was very excited,” Smith says of the recognition. “It was a surprise.”

This month, he observes his 50th year in practice, having graduated from Wake Forest University School of Medicine in 1966.

At the awards ceremony in Raleigh, he met a lot of new people, he says, including Dr. Gary Greenburg, medical director of Open Door Clinic in Raleigh, also a top-10 nominee. The two gravitated toward one another.

“We got to meet and exchange ideas,” he says of the entire group. “We had some good conversations.”

The winner of the award was Dr. Jason Stopyra, emergency physician for Randolph County Emergency Services in Asheboro and staff physician at Mountain Valley Hospice & Palliative Care in Mt. Airy.

Robert Wilkerson is one of Smith’s patients, and the two work together to manage his diabetes, gout, arthritis, cholesterol and high blood pressure.

“He’s real friendly and real nice,” Wilkerson says of Smith, and adds that he receives the same level of care as he did when he saw physicians in private practice.

“I’ll see you in about four months, unless you need something sooner,” Smith tells him at the end of the visit.

Back in his office, Smith notes, “We’ve delivering care as cost-effectively as anyone can.”

For every dollar donated to Community Care Clinic, eight dollars’ worth of services are provided.

Most clinics charge a nominal co-pay, Smith says. But Community Care Clinic is totally free for its patients. Some give when they can. Others make donations after they get a job and are no longer patients.

“I’m glad they think about us,” he says.

Although the clinic often refers patients to specialists in the area, Smith says, “I emphasize to patients that this is a primary care clinic.”

“I thought, why not?” he says. “I don’t have any hobbies, and don’t enjoy downtime. You get bored awful fast just sitting at home. It’s something I have fun with. Our patients are a joy, and I get a feeling of accomplishment. It keeps your mind active.”

He adds, “This is an underserved population, and the emergency department is not a place to deliver primary care. It costs an enormous amount of money, which the hospital is not compensated for. My job is just to see patients, and Novant has been good to us.”

Not only does he serve patients at the clinic, he mentors medical assistants who are working a gap year at the clinic — all while waiting to enter graduate school. Thus far, Smith has worked with Jessica Weddington Juhaish, who’s finishing an OB-GYN residency, and Wesley Eagle and Emily Patterson, who are studying to be physician assistants. The clinic’s newest medical assistant is Abby Pennington, who plans to enter PA school in the next two years.

“It’s fun to work with people, and it’s fun to teach a little bit, too,” Smith says. “They will all go on to bigger and better things.”

In working with patients, he adds, “Sometimes you have to dig deep. I’m going to keep working. If you enjoy what you’re doing, it’s really not work.”

Krista Woolly, the clinic’s executive director, is thrilled to have Smith on her staff.

“He’s a real person,” she says, “and he treats our patients like they’re real people. With him, there are no pretenses. He’s seen everything and nothing surprises him. He can read people. He’s just a good guy.”

By Amanda Raymond amanda.raymond@salisburypost.com MOORESVILLE — True South Shop is giving the community a place to pick up household products and... read more