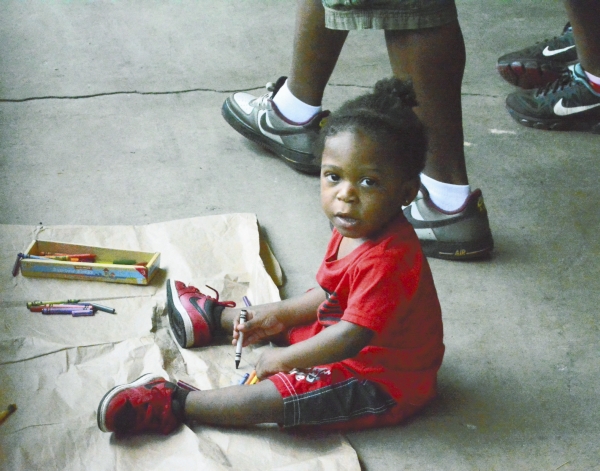 SALISBURY — It was a beautiful day for a picnic, as nearly three dozen staff members, children and parents gathered for an end-of-the-year celebration sponsored by Smart Start Rowan.

The picnic, held June 2 at Granite Civic Park in Granite Quarry, featured a delicious meal catered by El Patron, Wahoo’s Diner and Chick-Fil-A, the awarding of certificates for parents who participated in the Circle of Parents and Parents as Teachers support groups, and shopping with Baby Bucks, an incentive program in which the parents participated.

They received the bucks, said Mary Burridge, Smart Start Rowan’s program manager, by completing home visits or attending group programs. They received 10 additional Baby Bucks for coming to the picnic. With the green dollars, they could purchase toys and baby supplies. It was the big hit of the day, as parents redeemed more than $200 worth of Baby Bucks.

The other big hit of the day — literally — was a piñata that the kids took turns trying to burst, from the youngest to the oldest. Finally, Smart Start Rowan’s Bianca Munoz-Norman, whose father Tirzo Ortiz donated the tough-to-break piñata, took a well-placed swing, and the candy went flying.

Munoz-Norman attended the event with her husband, Henry Norman, and their two children, Emilio Norman, 5, and Lucy Norman, 2.

“That thing was heavy,” said Norman, who held onto the rope attached to the piñata. “It was loaded.”

Munoz-Norman first came to Smart Start Rowan to participate in its programs, has served as interim receptionist, and is now a childcare provider during support group meetings.

“The playroom is so great for the families,” she said. “I’m gonna miss these children this summer. We’ll pick up again after school starts.”

The couple’s son will enter kindergarten at China Grove Elementary School this fall, and is well prepared, thanks to Smart Start Rowan, his mom said.

“Having him with other children and using the Early Learning Resource Center and attending community events like this has been wonderful,” Munoz-Norman said. “There are so many resources out there that I know about because of Smart Start Rowan.”

Jamie Hicks attended the picnic with her three boys, Noah, 9, Bryson, 6, and Micah, 14 months. She had about two dozen Baby Bucks to spend.

She let her older boys each pick out a toy. Both chose a small stuffed animal — a lion that becomes a monkey.

“Thank you, Mom,” they chorused.

Burridge’s mom, Nancy, lent an extra set of hands to the preparations. She also helps with child care during the group meetings.

“Smart Start is her heart,” Nancy Burridge said of her daughter’s work. “Mary and I know each other so well. It makes things go so much smoother. I’m very proud of her. And I have the honor of helping raise my granddaughter, Greenleigh. She is a little character!”

Burridge gave a special shout-out to the three participating restaurants, which provided lunch at a “very good discount.”

“We love working with our community,” said Juan Cordova of El Patron. “It was a pleasure to partner with Smart Start Rowan for this celebration.”

“The meaning of ‘restaurant’ is a place to be restored,” said Dustin Wilson, marketing director of Chick-Fil-A of Salisbury. “We want to have a positive impact on the community in any way that we can. Smart Start Rowan is great, and we love supporting them because we know that they are helping kids and families in our community.”