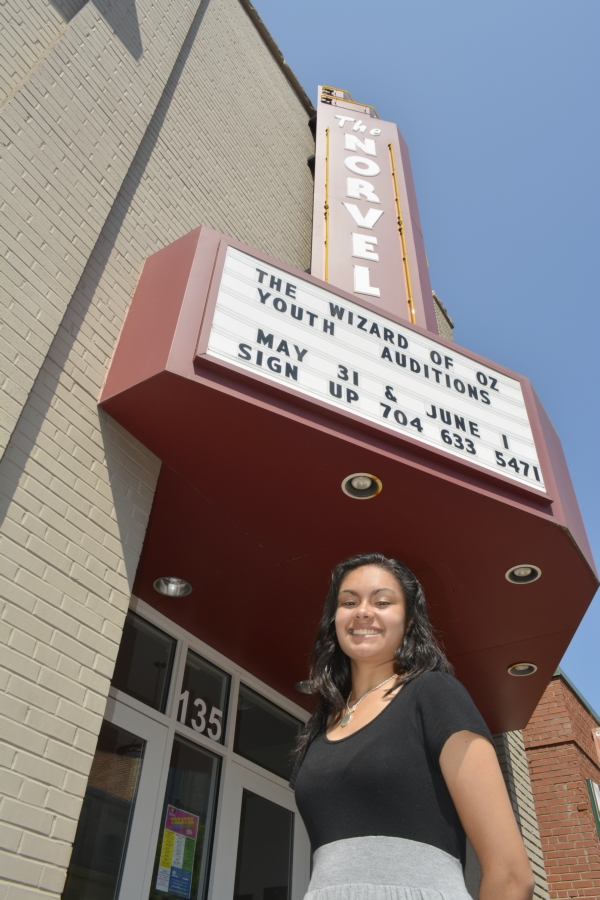 Brittney Hogan got involved in theater, one of several activities that helped her work through depression during high school. Susan Shinn/Salisbury Post

North Hills student reflects on recovery and her future

The following is an excerpt from Hogan’s May 27 graduation speech.

There was a new student at the school. Didn’t talk much, didn’t draw attention to themselves, but they were there. The student began playing sports and becoming good friends with their fellow classmates. Unknown to most if not all of their classmates, this student had a serious battle with depression, to the point of suicide. The student would go home and try to find any reason to keep living. It wasn’t the family’s fault; the student just couldn’t see why they were worth anything. But the deciding factor was the friends that the student had at school. Those friends made them feel important, feel needed, feel wanted. They would be there to pick them up with a good laugh when the student was feeling especially down. It was because of these moments, these friends, that this student is honestly alive today and in the position they are in. Maybe it’s a cliché story, but I swear it’s true. In fact, it’s not only true, but also right in front of you. You see, this student went on to become the valedictorian of the North Hills class of 2016. If I haven’t told you already, everyone in this class is so very important to me. In fact, you guys are my world.

SALISBURY — This weekend is graduation for many high school students in Rowan County, and no doubt their valedictorians will give many excellent speeches.

For her graduation speech on May 27 at North Hills Christian School, Brittney Hogan decided to share her story of overcoming depression, in hopes of helping others.

Brittney, 18, began researching speeches about two weeks before graduation, when she found out she’d be representing her graduating class of 14 students.

“I looked through ideas, and I did not find anything I liked,” Brittney says.

Then she ran across the following quote: “To the world, you may be one person, but to one person, you are the world.”

That’s how she felt about her classmates.

“Most of us were in the same classes all four years,” Brittney says. “We had some rough spots, but this year, we really came together and bonded.”

A senior trip to Atlanta further strengthened those ties. The group stayed in a lake house together, toured the World of Coca-Cola and the Georgia Aquarium, took in a Braves game and went rollerblading and to Six Flags.

Brittney first came to North Hills as a freshman before being homeschooled through eighth grade.

“I wasn’t comfortable going from home school to a public school,” she says. “I wanted a smaller school where I could get to know people. My freshman year, I wasn’t very outgoing. It would have been hard to make any friends at all.”

The smaller classes, the personal attention, and the Christian worldview at North Hills appealed to Brittney and her family. She is the daughter of Marty and Amie Hogan, and has an older brother, Brytan, 21, a graduate of Rowan-Cabarrus Community College; a younger sister, Bethany, 12; and a younger brother, Benjamyn, 10.

Still, she says, it was difficult.

“Going into freshman year,” she says, “I really didn’t know who I was as a person. It got really hard and I was really depressed for awhile.”

But her peers influenced her in a positive way, she says. “I never had to question what they thought of me. I knew I was important to them and that they liked me. This reassurance to me was at a really pivotal part of my life. I began to feel less of an introvert and closed off. It was a slow process. It took a little time.”

At first, Brittney did not want to talk to her parents, preferring instead to ask for support for them.

But finally, she did, and with their support was able to work through her depression.

“It was very brave of her to talk about this in her speech,” her mom says. “She loves books, and that’s how she overcame her depression, through her studies and through sports.”

Brittney played volleyball, basketball and softball. Another thing that helped was being involved in theater.

“Nobody in my family has ever done theater,” she says, “but you have to find what you’re passionate about.”

Her first show was “‘Les Miserables,” a collaboration between Piedmont Players Theatre and Salisbury Symphony in October 2014.

Brittney went on to appear in “A Seussified Christmas,” “Macbeth,” “Tarzan” and “Taming of the Shrew” at the Norvell Theatre.

“How do you sum up Brittney in one quote?” says Reid Leonard, PPT’s director. “We love Brittney. She’s the whole package. She’s bright, she’s talented and she’s focused. The office loves her as much as we do on stage. She was our intern for awhile.”

Brittney counts the Shakespeare productions as among her favorite. She wears a necklace with an inscription from “Julius Caesar”: “The fault, dear Brutus, is not in our stars, but in ourselves.”

It also reminds her of a favorite movie, “The Fault in Our Stars.”

“It’s a reminder that you can only control yourself,” Brittney says.

Brittney worked hard this year, but was unsure as to whether she’d receive top honors. “It was a pleasant surprise. We all wanted to do our best, but nobody was too awfully stressed out over it. We joked about it. On the senior trip, I’d say, ‘Why don’t we do this?’ and somebody said, ‘Ah, that’s why your valedictorian!’”

She adds, “Everybody has a purpose. There’s a reason why you’re here. You may not have found the reason yet, and it’s fine.”

Still, she says, opening up to others is a good idea. “It really helps you talk about things and think through things. If you’re having a problem, you definitely don’t want to keep it from your parents.

“It’s a good thing I went through it, because now I can help others.”

This fall, Brittney will study business and acting at Western Carolina University.

This summer, she’s helping out with PPT’s camps, and she’ll attend student orientation at WCU, but she’s not nervous.

“I think I’ll be OK,” she says. “I know I’m a different person now than freshman year.”

By Josh Bergeron josh.bergeron@salisburypost.com SALISBURY — In an unwieldy field of 22 candidates, voters on Tuesday chose a Davie County... read more