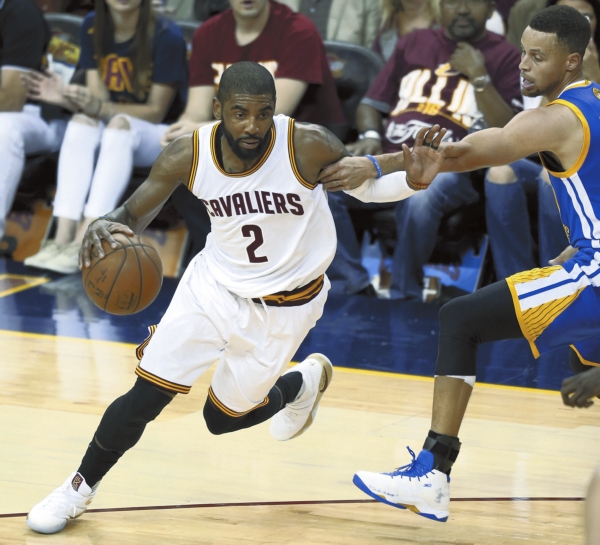 CLEVELAND (AP) — LeBron James scored 32 points, Kyrie Irving added 30 and the Cleveland Cavaliers, pushed for 48 minutes by a delirious, championship-starved crowd, hammered the Golden State Warriors 120-90 in Game 3 on Wednesday night to pull within 2-1 in the NBA Finals.

On their home floor, where they have been dominant all postseason, the Cavs pulled their season from the brink of disaster following back-to-back blowout losses in the Bay Area.

“Coaching staff gave us a great game plan and we executed it for 48 minutes,” James said.

They did it without starting forward Kevin Love, little help from their bench and by keeping Stephen Curry penned in.

The league’s MVP was mostly MIA, scoring 19 points — two in the first half — on 6-of-13 shooting. Harrison Barnes scored 18 and Klay Thompson 10 for Golden State, which had won seven straight over Cleveland — the first two finals games by a combined 48 points — and came back to the birthplace of rock and roll looking to party like they did after winning the title in Quicken Loans Arena last year.

The Cavs, though, have made this a series after it appeared the Warriors were on the fast track to another crown.

James had called it “do or die” for Cleveland.

“We’ve got to give the same effort on Friday,” James said. “It started defensively and it trickled down to the offensive side.”

Irving bounced back from two rough games out West, J.R. Smith made five 3-pointers and Tristan Thompson did the dirty work inside, getting 13 rebounds for the Cavs, who improved to 8-0 at home and can even the series with a win in Game 4 on Friday night.

The Cavs hardly missed Love, still suffering from a concussion sustained in Game 2. He wanted to play, but Love is still in the NBA’s concussion protocol and has not yet been cleared to return by league and team doctors.

Leading by eight at halftime, Cleveland took control in the third quarter when James and Irving combined on a play that symbolized the Cavs’ resurrection.

Crawling on his hands and knees after a loose ball near midcourt, James got to his feet and whipped a pass to Irving on the left side. Irving returned a lob to James, who leaped high and flushed it with his right hand, a basket that seemed to erase all that went wrong for the Cavs in California.

Before taking the floor, James and the Cavs huddled in the hallway outside their locker room and prayed.

James then gave his teammates some instructions.

“Follow my lead from the beginning!” he screamed. “And do your job!”

The Cavs listened, scoring the game’s first nine points and opening a 20-point lead in the first quarter. With their season on the line, this was the response Cleveland had to have, but the Cavs fell back into bad habits in the second quarter, rushing shots and not moving the ball.

The Warriors took advantage, outscoring the Cavs 27-18 to pull within 51-43 at halftime.

Warriors: Thompson left briefly in the first quarter with a bruised left thigh after he ran into a screen by Cleveland’s Timofey Mozgov. …Coach Steve Kerr became emotional before the game when paying his respects to Sean Rooks, his former Arizona teammate who died Tuesday at the age of 46. “He was a gentle giant,” Kerr said. “He always had a smile on his face.” Rooks died shortly after he interviewed for an assistant coaching job with New York. … Green has become Public Enemy No. 1 in Cleveland — and elsewhere. He smiled while being booed during pregame warmups.

Cavaliers: James has 82 career 30-point games in the playoffs, third most all-time. Only Michael Jordan (109) and Kobe Bryant (88) have more. … Smith nailed a shot from halfcourt at the end of the second quarter, but the shot came after the horn and was waved off. … Lue said he doesn’t pay any attention to the all the outside second-guessing about his lineups. “I don’t care,” he said. “They (critics) should be coaches.” … Legendary Browns running back Jim Brown sat courtside and gave the crowd a thumbs-up when he was shown on the giant scoreboard.