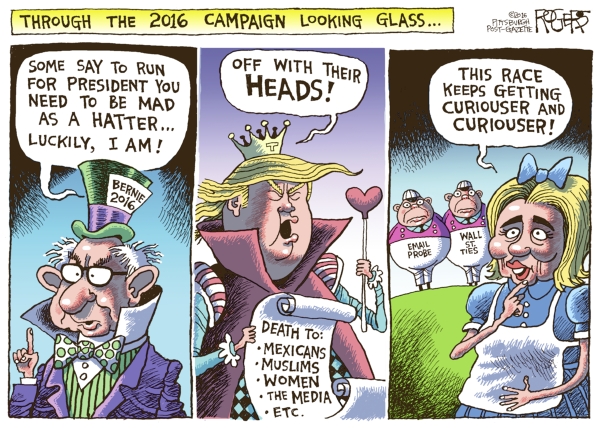 Garrison Keillor: The perils of prominence The father of the graduate is a footman at the festivities, a porter, a supernumerary. Through cunning and perseverance, he has accumulated the pots of gold required to raise a girl nowadays, supply the wardrobe and the array of lotions and emollients, pay the string of retainers and therapists, foot the bill for class trips and team sports and top-flight electronics, and now, as the daughter processes through the crowd in the gymnasium, as the mother quietly weeps, the father sits, holding a spare hanky, wondering how he will pack the child’s luggage into the trunk of the tiny rental car. Luggage loading is the one job he is entrusted with. And driving.

A bagpiper plays the class of 2016 into the gym and the father feels an urge in his Scots blood to wreak violence on the foe, but there is no foe to wreak it on, only the elderly men of the Board of Trustees tottering onto the dais and the exhausted faculty and the poor commencement speaker, his hands bound behind him, the noose around his neck. I have been that man as recently as a year ago and I remember the experience clearly.

The Class plops down and the father attempts to make eye contact with his daughter, forgetting that she is 18, she does not do eye contact with parents. An invocation is offered, which is vague so as not to offend any Rastafarians or Zoroastrians among us, and the faculty rises to be applauded, and now it is time for the speech, and my mind goes back to my debacle of a year ago.

As the speaker, you are given a fulsome introduction that goes on too long. The audience is there for reasons that have nothing to do with you and as your honors are recited — the honorary B.S. from Trump University, the Lady Byng trophy, the Grammy for grammar, the Pulitzer from the American Chicken Institute — the crowd comes to loathe you as you slouch toward the podium, and here you realize your dilemma. You, eager to impress, have written 3,000 words and the crowd only wants 150 of them and it is not easy to edit on the fly.

Sit down, shut up

You launch in and after two paragraphs the audience is gone; your fine words about accepting challenges may as well be in Urdu. Everyone in the audience is focused on a particular child, their shining star, and you are merely a coat rack. They want you to sit down and shut up.

This is a learning experience for a man and I am about to pass the lesson on to you, so take those buds out of your ears and pay attention.

So much of what one expects to be a great honor turns out to be a moment of exquisite public shame.

Let me repeat that. A man rises suddenly in the world and is thrilled by his fame and then notices that he is hanging by his left ankle from a sapling that was rigged to snatch him up when he reached down for that glittery object that turns out to be a rhinestone badge that reads BOOB.

This brings us to the subject of the Republican nominee, Mr. Btfsplk.

The man is still exulting at his triumph over the law firm of Ryan, Romney, McConnell, McCain & Limburger, so much so that he is still giving his Greatest Hits speech about the wall, deportation of Mexicans and barring entry of Muslims, slapping the Chinese around, spreading nukes, making up with Putin, leading our miserable Third World country to greatness, and it has not yet dawned on him that in July he will stand up in Cleveland and address the largest audience of his life and he will be stark naked.

Thirty million people will see firsthand what comes of a comfy childhood and extended adolescence and the life of a tycoon with a childlike worldview unchallenged by the hirelings and sapsuckers around him. He will have the privilege of addressing a sizable chunk of the electorate and they will have the privilege of looking at him and seeing a naked man who has not gotten much exercise. As the former White House aide Michael Gerson pointed out recently, Mr. Btfsplk is the most ignorant man to run for president, and presumably that includes candidates for the Flat Earth and UFO parties. The GOP is betting on an average IQ of 69 at the polls this year. The statistical average is 98. Not a good bet.

Salisbury is one of 20 finalists for the All-America City Award, with 10 winners to be named this summer. Those are good odds. First,... read more