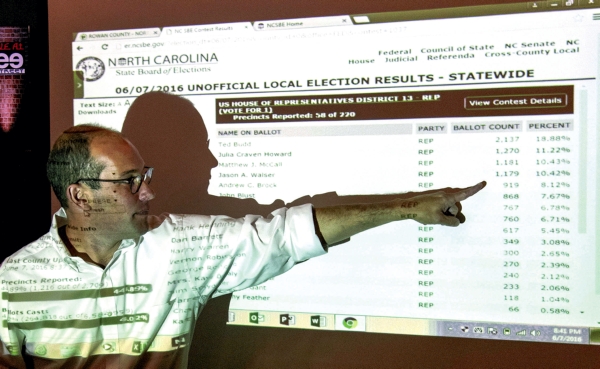 SALISBURY — In an unwieldy field of 22 candidates, voters on Tuesday chose a Davie County business owner and a former Guilford County commissioner to face off in the November general election for the newly redrawn 13th Congressional District.

On the Republican Party side, gun shop owner Ted Budd won with double the number of votes as second-place finisher John Blust, a state representative from Guilford County. Former Guilford County commissioner Bruce Davis, who owns a child care center, won the Democratic Party race by a minuscule margin of just 112 votes. The margin of 112 votes over second-place finisher Bob Isner appears to be small enough for a recount.

Budd received 20.01 percent of the vote. Davis received 25.71 percent. Because there’s no runoff this year, both men will automatically advance to the general election if results hold up.

Commenting on his victory, Budd said he was honored and humbled to win the Republican race.

“I look forward to earning the support of the other Republican primary candidates in this race in the coming days and weeks,” Budd said in a prepared statement. “It will be critical that we unite over the next five months if we want to send a true conservative outsider to Congress who will defend their values in Washington, D.C.”

Budd’s victory comes in his first bid for political office.

Davis could not be reached late Tuesday night to comment on his victory.

The 13th District race drew a bounty of attention for its large field of candidates — 17 on the Republican side and 5 on the Democratic Party side — and its lack of an incumbent. Following redistricting, Rep. George Holding, who currently holds the 13th District seat, decided to run in the 2nd District, where he lives. After federal judges declared North Carolina’s congressional map racially gerrymandered, state legislators moved the 13th District to the Piedmont. Counties in the 13th include Rowan, Davidson, Davie, Guilford and Iredell.

Rowan County had three candidates in the race — Kathy Feather, Jason Walser and State Rep. Harry Warren. None finished in the top five, but Walser did the best of Rowan’s candidates. He received 2,286 votes and finished first in Rowan County. Warren received 1,258 votes, a majority of which came from his second-place finish in Rowan County.

He wasn’t the biggest fundraiser, but money undoubtedly made a difference for Budd. A political group called the Club for Growth spent about $500,000 on Budd’s behalf. Most of the money went toward TV commercials.

State Rep. Julia Howard, R-Mocksville, also received money from an outside political group, but it was notably lower than Budd’s total. She finished third, just three votes behind Blust.

When asked, Warren and Walser said there’s a direct correlation between money spent by outside political groups and how candidates faired in the 13th District race.

“Yes, money has a big factor and that’s one of the downsides of our political system,” Warren said. “To have that infusion of that much money at such a late date in the campaign is the only explanation you can have for the impact that we’ve seen.”

Walser said money from outside political groups means dollars have a more significant effect on election results than a vote from an average person.

“Money coming in from outside of the state matters and obviously it did have an impact,” Walser said. “But, at the end of the day, Ted Budd ran a good, positive campaign.”

Following the loss, Warren will continue to serve in the North Carolina State House. Because of redistricting, Warren was allowed to seek re-election to the legislature and run for Congress. He doesn’t face any opposition in the general election. As a result, he will serve two more years.

“I had an opportunity to run for the U.S. Congress and not a lot of people can say they’ve done that,” Warren said. “What all of this actually means is that I’ll have an opportunity to serve Rowan County for two more years.”

Walser will continue to work as a consultant for the Blanche and Julian Robertson Family Foundation in Salisbury. He is working on a project to revitalize the city’s West End neighborhood.

“I’d loved to have won but, to be sincere, I’m exhausted and tired,” Walser said. “It will be nice to get in my groove and just be a regular guy.”