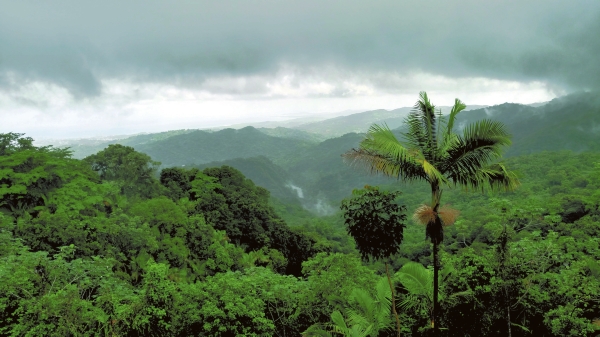 A view of the El Yunque Rainforest from an observation tower. Mark Wineka/Salisbury Post

It only took about an hour. I told myself a brief lounging poolside in the Puerto Rican sun would simply establish my base tan.

I was in Puerto Rico for a week, in connection to my son’s “destination wedding,” so I wanted to look good by week’s end when all the activities such as a beach party, rehearsal dinner and the wedding ceremony itself were happening.

So on the first day, never heeding my wife’s sound advice to wear sunscreen, I burned. By the next day, I looked like a cooked lobster, and the rest of the week you could hear all the young people connected to the wedding whispering, “Have you seen Mr. Wineka’s legs? They’re on fire.”

My wife just shook her head and pressed on.

When you go to a place you’ve never been before, as was the case for me and Puerto Rico, it’s an enriching, educational experience. We rented a car, and you find that people on the island tend to roam rather than drive. They create lanes of traffic where none exist, and it’s high adventure, especially on the streets of San Juan, the capital city.

There are about 3.7 million people in Puerto Rico and more than 2 million cars. Someone told me the joke is vehicles in Puerto Rico are sold with no side-view mirrors, because they wouldn’t last long anyway.

I actually was pretty impressed with the native drivers and how many accidents they avoid on any given day.

As you can imagine, there was considerable conversation and concern among the folks traveling to the wedding about the Zika virus. Speaking for myself, I didn’t find the mosquitoes to be a problem.

What I should have done with sunscreen I did with wipes soaked in mosquito repellant, and I don’t think I was bitten at all by a mosquito — probably because it was impossible for them to get through my leathery skin.

My wife and I did some of the typical touristy things in Puerto Rico. We walked, for example, down the cobblestones and brightly colored streets of Old San Juan, and we chased showers through the El Yunque Rainforest. We blame a confused GPS system for missing — by 10 minutes— our scheduled boat tour of the Bioluminescent Bay in Fajardo.

Within its almost 3,500 square miles, Puerto Rico offers a lot of things to do, from its beaches to the mountains. I will sound like a tourism official here, but the island has all kinds of kayaking, rappelling, tubing, ziplining, ATV-riding, jet-skiing, snorkeling and boating adventures, and a lot of people in the wedding party took advantage of those opportunities.

I was more interested in a tour of the Bacardi Rum distillery and eating enough pork — a staple in the local diet — to where the week became a trip to Pork-O-Rico.

Over the week, I learned to love the coqui — tiny tree frogs that chirp like crickets at night. And my wife was disappointed she did not see more iguana, which are considered an unwanted infestation by Puerto Ricans. The iguana outnumber the people and the cars on the island and sometimes just drop out of trees along the roads. Or so my wife kept telling me.

I was too busy roaming.

The Puerto Rican people have their challenges. The government is bankrupt, and one of our tour guides pulled no punches in describing the corruption. Things are bad enough that the U.S. territory has been losing population in recent years as people go elsewhere to find a better living.

We arrived in Puerto Rico at the beginning of the rainy season, so it was pretty wet at times. But somehow we managed to fit all the wedding stuff in without a problem. By the time we came home late Sunday night, we were pretty sad to leave Puerto Rico, where the people are really friendly and helpful, especially to a tourist with a body ablaze.

While I was sitting at the kitchen counter Monday morning eating breakfast, my wife asked whether I wanted some dabs of lotion for my skin.  What was the point, I thought, since my skin had been peeling off in layers over the last several days.

I declined the lotion, as I had the sunscreen, until she chastised me for going through 34 years of marriage of stubbornly ignoring her constant efforts to look after my physical well-being.

I realized then I’m a confirmed roamer, not a driver.  I come with no side-view mirrors.