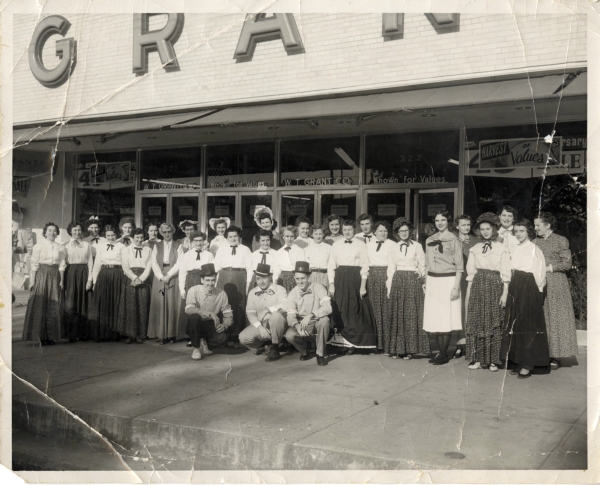 This is a photograph submitted to the Post by Joe Williams. His mother, Lorraine Williams, is wearing a vest and is the fifth person from the left. She was an employee at the then new W.T. Grant Co. store at 322 S. Main St., where Hometown Furniture has called home for many years. As you can see, the employees looked to be dressed in their Rowan County Bicentennial clothing, which makes the picture a little difficult to date. The Grant store, which billed itself as four stores in one, opened in Salisbury on April 22, 1954. The county’s bicentennial year was 1953, so maybe this photograph was taken before the store opened, or did bicentennial activities and celebrations spill over into the following year? Store manager Don McKenzie is in the middle, and Williams says Dot Montgomery is the third person in from the left. The Grant store in Salisbury was the company’s 12th in North Carolina and it covered 16,800 square feet. Company officials liked to promote their stores as offering fashions, dry goods, home/hardware and variety — four stores in one.