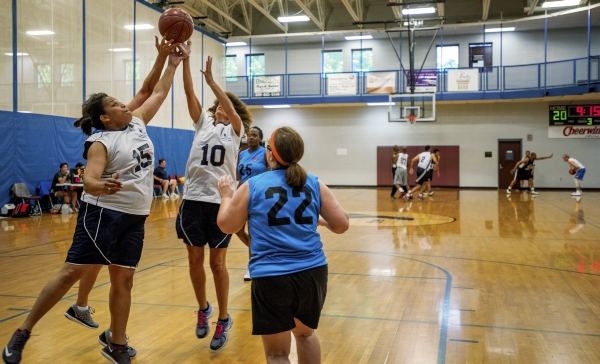 ALLISON LEE ISLEY/SALISBURY POST The Rowan Cougars' Shanita Millsaps, left, and Ann Barkley reach for the ball during their second game against the Sassy Sisters at the Senior Games State Qualifying Basketball Tournament at the East Rowan YMCA in Rockwell on Saturday, June 4, 2016.

ROCKWELL — The sounds of orange balls bouncing on wooden floors, squeaking sneakers and whistle blows filled the gymnasium at the Saleeby-Fisher YMCA for the Salisbury/Rowan Senior Games qualifying basketball tournament on Saturday.

Twenty-two teams from all over the state played against each other for the chance to advance to the state finals at East Carolina University and then to the National Senior Olympics in Birmingham, Alabama, during the summer of 2017.

Phyllis Loflin-Kluttz, Senior Games and Silver Arts coordinator for the Rowan County Parks and Recreation Department, said all of the teams want to get to nationals.

Loflin-Kluttz said this is her seventh year running the tournament.

Wallace Lewis and Garth Johnson, team members of the Raleigh team Wazee, helped start the tournament in Rowan County. Wazee has won five state championships and was second in the country in 2013.

Lewis, team captain, said Loflin-Kluttz’s charisma and the atmosphere she created for the games were the things that convinced them to help out.

“We realized the competitive nature she has here is really good,” Lewis said.

For the tournament on Saturday, players played half-court games of three-on-three. The teams played for two 10-minute halves. The team that won the best of three games advanced to the next level.

Lingle said when she was asked if she was interested in playing basketball in the Senior Games, she recruited as many of her softball teammates to play as she could.

The team practiced twice a week at Knox Middle School.

Lingle said the game is not any less competitive just because the players are a little older. She said playing half court actually speeds things up.

“Everything is about the speed,” she said.

Ann Barkley was one of the softball players Lingle recruited. She said she likes the competition, but she also enjoys meeting up with teammates who she has known for years.

“We still get to do what we love, and with our friends,” she said.

Shanita Millsaps, a Rowan Cougars teammate and also the school resource officer at Knox Middle School, said she never really thought about playing sports after turning 50. But she has always been athletic, so she said she enjoys it.

The competitiveness of the players was visible in every game. During a game with the Rowan Cougars playing against the Sassy Sisters, the ladies were sweating while running up and down the space. Balls were stolen, shots were blocked and rebounded and players were fouled while teammates cheered from the sidelines.

The men’s teams were even more aggressive.

Rose Cox played on the Rowan Cougar team that was made up of players 55 and older. She said even though she played basketball while at Catawba College, there was a definite learning curve.

“We are reliving our youth at a slower pace,” Cox said, laughing.

Cox was also able to reconnect with old friends, including her college roommate who was also on the team.

There were two men’s teams from Rowan County — The Real Deal and the Triple Threats.

Sam Lowman, a Triple Threat player, said he has won a gold medal in five of the six games he has been in. He said the games not only allow him to meet new people and have fun, they also keep him young.

“It’s great exercise. It keeps you energetic,” he said.

Andrew Randolph, a player on The Real Deal, said the responsibility he feels towards his other teammates motivates him to push pass fatigue and sore muscles.

“You push yourself more than you do in any individual sport,” he said.

Athena Moore, team manager for both Cougar teams and the women’s softball team, is a Senior Games ambassador. She said she likes being able to get younger people involved in the games so that they will continue to stay active as they grow older.

“I just like helping people stay active,” she said.

Lingle said she appreciated the opportunity to stay active. She said the quote by playwright George Bernard Shaw on one of her T-shirts summed it up best: “We don’t stop playing because we grow old. We grow old because we stop playing.”

For more information about the Senior Games, visit https://www.rowancountync.gov/GOVERNMENT/Departments/ParksRecreation/SeniorGamesArts.aspx.