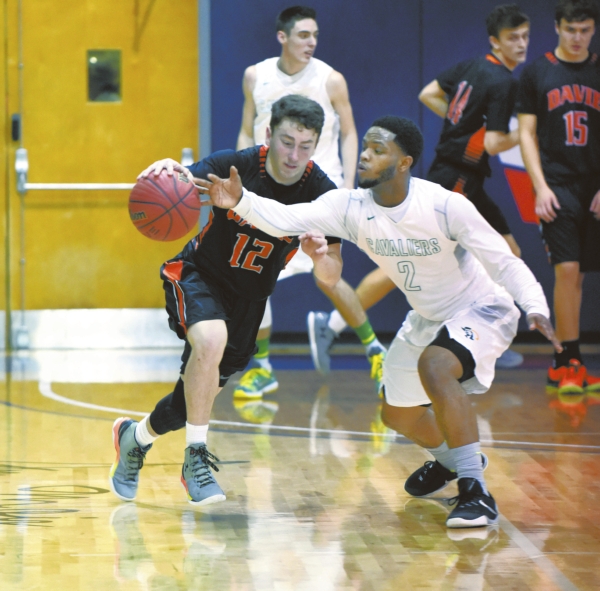 SPENCER — The “fight” that brought an abrupt end to North Rowan’s basketball season prevented Jalen Sanders from making a run at the school scoring record, but he did surpass Salisbury High legend and former NBA Sixth Man of the Year Bobby Jackson with his final bucket.
The career scoring totals: Sanders — 1,547. Jackson — 1,546.
Sanders ranks ninth on the all-time county scoring list, while Jackson slides to 10th.
North coach Andrew Mitchell is hopeful the similarities between his friend, Jackson, and his pupil, Sanders, won’t end with their prep point totals.
Like Jackson, who went to Western Nebraska before moving on to Minnesota, and then the NBA, Sanders is headed west to a junior college.
Sanders will continue his education and playing career at McLennan Community College in Waco, Texas. He’s had a few conversations with Jackson about the obstacles Jackson overcame to make it to the top, and Sanders is confident those talks will light his way.
“Bobby told me that everyone’s path is not the same,” Sanders said. “You have to find your own way, and the way that’s right for you. But it’s possible to go to junior college and still reach all my goals. Bobby showed that it’s possible.”
Waco is in eastern Texas, about halfway between Dallas and Austin. It’s a sizable city of 125,000, a little larger than Wilmington or High Point. Waco is 1,150 miles and a 17-to-18 hour drive from Salisbury.
The most famous McLennan sports alumni are Jay Buhner, a right fielder who made the 1996 all-star game and slugged 310 MLB homers, mostly for the Seattle Mariners, and Vinnie Johnson, a Detroit Pistons guard known as the “Microwave” for his ability to generate instant offense off the bench. Johnson drilled a heavily contested jumper in the 1990 finals that sank the Portland Trailblazers and made the Pistons world champions. There was another night the “Microwave” scored 22 points in the fourth quarter against the Boston Celtics.
So McLennan has its place in the sports world.
“It’s a long way off, but I’ve got an uncle who lives about two hours away from there, and I feel like the best thing for me is to get away from Salisbury,” Sanders said. “It’s time to leave, but I’ll always love Salisbury. I’ll always come back home.”
McLennan, located a few minutes away from Baylor University, plays in a serious junior college league. The McClennan Highlanders qualified for the 2016 national tournament in Kansas and had two players sign in April with Division I schools.
“This is the highest level of junior college basketball, top-notch competition,” North Rowan coach Andrew Mitchell said. “But Jalen will do very well. He won’t let himself be outworked, and he’s always risen to the next level of competition.”
Sanders hadn’t heard of the school until a McLennan recruiter saw Sanders competing in a recent tournament with Team F.L.Y., a Rowan-based AAU team that also includes Sanders’ North Rowan teammates Joe Scott and Henderson Lentz.
“McLennan told me I was an overlooked player that could play at the Division I level,” Sanders said. “They told me I was the kind of player who could lead them where they wanted to go.”
Sanders, a strongly built 6-footer who improved his shooting, ball-handling and passing during each of his four varsity seasons, received numerous accolades as a senior. He was Rowan County Player of the Year for the second time, Dale’s Sporting Goods/Sam Moir Christmas Classic MVP and Central Carolina Conference Player of the Year.
“He’s definitely the best player I’ve ever played with,” Lentz said. “Even when he wasn’t scoring, he was such a threat. Anytime he drove, he was so strong that the whole team had to go help, and that left the rest of us open.”
Sanders averaged 18.5 points per game, including a career-best 31 in a win at 4A Ardrey Kell and was part of the elite 10-man team that represented North Carolina in the Carolinas All-Star Basketball Classic.
“My phone has been ringing every day now that Jalen is graduating,” quipped Mitchell. “It was hard finding people to play us. Now everyone wants to get us on their schedule.”
North tackled challenging non-conference schedules but was 85-19 during Sanders’ four seasons. Counting a breezy 16-0 romp through the 1A Yadkin Valley Conference in Sanders’ freshman season, Sanders’ teams were 44-2 in conference games.
“Jalen was known in our area for his unrivaled intensity and determination,” North Rowan athletic director Ben Hampton said.
Mitchell offered an interesting story from last season’s Moir Christmas Classic. North had jumped on Davie County in a semifinal game, but a tenacious Davie team had come back and seized momentum.
“I called a timeout and I told Jalen he was scared,” Mitchell said. “Jalen never talked back to me in four years, but he looked at me and said, ‘Coach, I’m not afraid of nothing.’ And then he went back out there and scored the next four or five points and we got control of the game.”
Sanders took control of a lot of games over the years and established himself as one of the best guards in Rowan County history. He’s talented, but as Hampton said, it was his toughness in the toughest games that made him special.
Next to the pizza at Sanders’ signing party was a colorful cake with a simple message spelled out in icing: “Sky’s the Limit.”
That summed up the day as well as any of the speeches.
Sanders has chosen a different path, but not an impossible one, and he’s not afraid to be challenged.
“Sometimes you have to leave your comfort zone to get to where you want to go,” Sanders said.